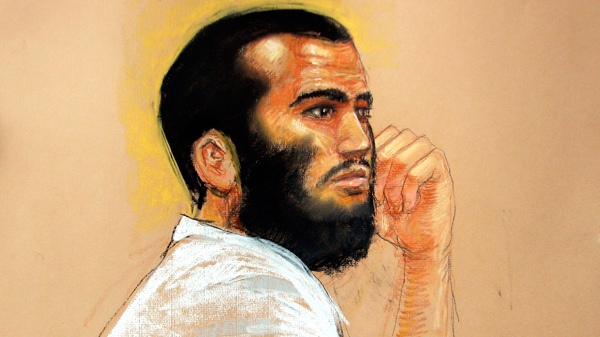 In this photo of a sketch by courtroom artist Janet Hamlin and reviewed by a U.S. Department of Defense official, Canadian defendant Omar Khadr attends his hearing in the courthouse for the U.S. military war crimes commission at the Camp Justice compound on Guantanamo Bay U.S. Naval Base in Cuba, Wednesday, April 28, 2010. (AP / Janet Hamlin)

MIAMI - A date has been set for the trial of Canadian terror suspect Omar Khadr.

The date was issued on Tuesday in a scheduling order to attorneys and "other interested parties" in the case of Toronto-born Khadr.

The hearings were suspended after eight days last week to give Pentagon officials time to submit 23-year-old Khadr to a mental health exam.

Khadr is charged with throwing a hand grenade that killed an American special forces soldier after a U.S. military assault on a compound in Afghanistan in July 2002, when he was 15 years old.

Parrish said that on Aug. 10 he would begin assembling a jury of senior military officers with opening arguments in the trial to "follow immediately thereafter."

Defence lawyers want all of Khadr's statements to U.S. and Canadian investigators excluded from the summer trial, arguing that self-incriminating statements were the products of torture. Khadr, who was taken to Afghanistan by his father as a child, has maintained that he was threatened with rape, held in stress positions, and otherwise abused.

He is the lone westerner still held at Guantanamo Bay, where he has been a prisoner since October 2002.

He is also the youngest detainee among 181 inmates still at the infamous facility, which U.S. President Barack Obama had pledged in January 2009 to close down.