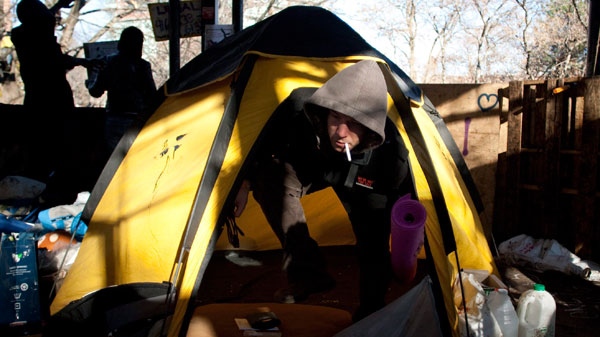 A new report finds that the gap between the rich and the poor just keeps getting wider in Canada.

The Organization for Economic Co-operation and Development released a report on Monday looking at the rise of inequality in countries around the world.

Particularly since the mid-1990s in Canada, the report states, the disparity between the rich and the poor has been growing.

That number was 10 times higher than those in the bottom 10 per cent, where average income was just $10,260 per year.

In the early 1990s, the report states, the richest 10 per cent of Canadians earned an average of 8 times more than the poorest 10 per cent.

"The rise in inequality was largely due to widening disparities in labour earnings between high and low-paid workers, but also to less redistribution," said the country note for Canada included in the OECD report.

Canada's market income inequality is 12th of the 29 countries included in the survey, which points out that "taxes and benefits reduce inequality less in Canada than in most OECD countries."

The country with the highest inequality between the rich and the poor was Chile, followed by Israel, Italy and Portugal, then the U.K. and the United States.

The study suggests there may no longer be truth to the notion that the poor will automatically benefit as the rich get richer, said OECD Secretary-General Angel Gurria.

"This study dispels the assumptions that the benefits of economic growth will automatically trickle down to the disadvantaged and that greater inequality fosters greater social mobility," Gurria said in a statement.

"Without a comprehensive strategy for inclusive growth, inequality will continue to rise."

The report also noted that the global financial crisis and the growing income gaps have given young adults a grim vision of their future.

"Fostering more and better jobs, enabling people to escape poverty and offering real career prospects, is the most important challenge for policy-makers to address," the report said.

"Investing in human capital is key. This must including the early childhood period and be sustained through compulsory education."

Here are some key findings from the report:

The report suggested that governments consider boosting revenue for job training and other programs by raising income tax rates.

During question period in the House of Commons Monday, NDP finance critic Peter Julian cited the report when criticizing the federal government for a "one-dimensional" economic policy that "is cutting taxes for Canada's biggest companies."

"What's happened is that not only has job creation not kept up with the labour market, but the jobs that they created pay about $10,000 a year less than the jobs they lost," Julian said.

"The OECD and the IMF say that Canada's economic growth (and) job creation will be the best going forward," he said. "That's how you address inequality."