Obama's signature: Is it real or is it autopenned? 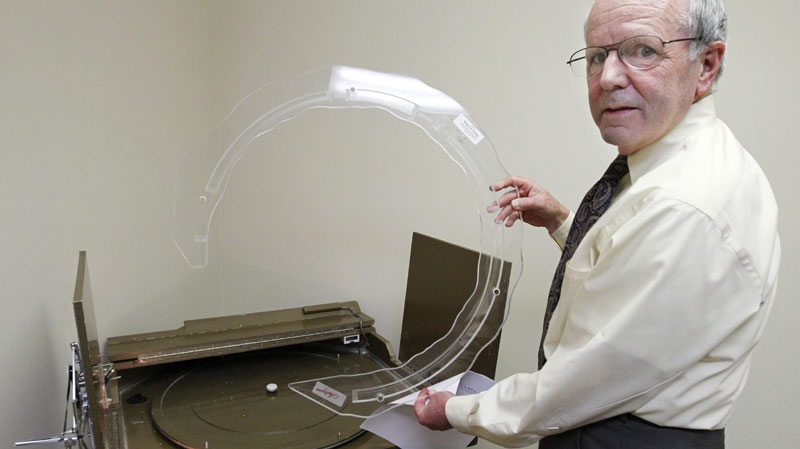 In this photo taken June 13, 2011, Bob Olding, president of Damilic Corp., the leading manufacturer of automatic signing machines for replicating authentic signatures, holds a template of his signature for used by Autopen Model 80 in Rockville, Md.

WASHINGTON - It's the open secret that nobody in government wants to talk about: That cherished presidential signature that's tucked away in a scrapbook or framed for all to see might never have passed under the president's hand.

For decades, presidents of both parties have let an autopen do some of the heavy lifting when it comes to scrawling their signatures. The machine was recently put to use signing a bill into law, apparently a first.

Overseas and out of reach when lawmakers passed an extension of certain provisions of the Patriot Act, President Barack Obama employed the autopen to sign it, a step the White House has been mum about ever since.

"I always heard the autopen was the second most guarded thing in the White House after the president," says Jack Shock, who had permission to wield former President Bill Clinton's autopen as his director of presidential letters and messages.

Jim Cicconi, who oversaw the use of autopens for President George H.W. Bush, recalls that the plastic signature templates for the machines -- yes, there was more than one autopen -- would wear out from repeated use.

Ronald Reagan had 22 different signature templates, including "Ron," ''Dutch" and other iterations, to boost the aura of authenticity surrounding his fake signatures, says Stephen Koschal, an autograph authenticator who two years ago published a guide to presidential autopen signatures.

It's not just ordinary Americans who get the autopen treatment.

Koschal says he once visited Vice President Dan Quayle's office in the Capitol and spotted a signed photograph from the first President Bush that he said had clearly been autopenned.

Obama took the presidential autopen out of the closet and into a new realm.

While traveling in Europe last month, Obama directed his staff in Washington to use an autopen to sign into law an extension of certain Patriot Act powers to fight terrorism. The legislation had been approved by Congress at the last minute, and there was no time to fly it to France for Obama's signature before the anti-terrorism powers expired.

It was believed to be the first time a president has used an autopen to sign legislation, and that didn't sit well with a number of Republicans. Twenty-one GOP House members sent Obama a letter on June 17 asking him to re-sign the legislation with his actual signature because use of the autopen "appears contrary to the Constitution."

Obama's team relied on a 29-page legal analysis crafted during the administration of President George W. Bush to argue that the faux signature passed constitutional muster.

Ari Fleischer, White House press secretary under the younger Bush, says the Bush White House had considered using the autopen to sign a minor piece of legislation as a test case, "but in the end Bush just kept signing the parchment himself." Bush used the autopen for routine correspondence and photos but not on matters of importance, Fleischer said.

While a number of White House aides from administrations past were willing to discuss the presidential autopen, that kind of talk is frowned upon while a president is in office.

"You want to preserve the president's semblance of reaching out and being connected," says Shock. "But the cold hard facts are that when you get 10,000 letters a day he can't possibly handle all that kind of correspondence himself."

It turns out there are varying levels of fakeness in presidential signatures.

There are preapproved form letters with digital signatures. There are preprinted cards for birthdays and other special events. Autopen signatures generally are reserved for more personalized correspondence that doesn't score a real signature, say officials from administrations past.

Obama's staff is loath to talk about his use of the autopen.

The president prefers to keep the focus on the sampling of 10 letters a day that he reads from among the tens of thousands that ordinary people send to the White House. In many cases, he writes back to these people, with his own signature.

But the president couldn't get around explaining how the Patriot Act got signed into law without briefly shining a spotlight on the autopen. Once that news was out, though, the White House clammed up. It declined to provide any further details about how many autopens the administration uses, what they look like, where they're kept, or who makes the machine.

And don't ask Bob Olding, whose company is the leading manufacturer of autopens, to discuss his clientele.

"I'm not going to help you," he said. "Our customers do not want anyone else knowing they have these machines."

Olding did reveal, though, that "when there's a major change in government, we get an uptick in business."

Olding is president of Rockville, Md.-based Damilic Corp., whose signature machines run from $2,000 up to $10,000. Hulking older versions look like a drafting table and are too big to fit through a doorway. Newer models, with microprocessors and digital controls, sit on a tabletop. But they still feature two mechanical arms that move a pen back and forth, up and down.

The machines sign letters at about the same pace as does the human hand. An autopen machine that automatically signs a stack of documents can spit out roughly 500 signatures an hour; those with manual document feeders, about 200 an hour.

As recently as the second Bush administration, the autopen in use was a large piece of furniture that looked like a drafting table, says Heidi Smith, who served as Bush's correspondence director for two years. She says those with clearance to use the autopen would head over to the executive clerk's office in the Eisenhower Executive Office Building, next to the White House, where the autopen wielded Bush's pen of choice -- a Sharpie.

Autopens have been used by presidents since Dwight Eisenhower, says Koschal, and President John F. Kennedy put them to heavy use. Many presidents have had secretaries sign their names to correspondence and documents, he says.

More than 200 years ago, Thomas Jefferson acquired a mechanical copying device called a polygraph that attached to his pen and made a second copy of what he was writing. Jefferson liked it so much he wrote that "I could not, now therefore, live without the Polygraph."

It's not just busy presidents who rely on autopens. They're used by thousands of organizations, companies and government officials.

Donald H. Rumsfeld got in hot water for using one as defense secretary to sign letters of condolence to the families of U.S. troops killed in action. When word leaked out in 2004, Rumsfeld said he'd done it to "ensure expeditious contact with grieving family members."

"I have directed that in the future I sign each letter," he said.

Other officials and candidates have fingered the autopen as an excuse to avoid taking responsibility for documents that appeared to bear their names. One was Enron executive Kenneth Lay, who was convicted of fraud, conspiracy and lying to banks despite his lawyers' arguments that he shouldn't be held accountable for documents signed by autopen. His conviction was later vacated on other grounds.

So how to tell the difference between a real signature and an autopen version?

Koschal says the best way to detect a fake is to lay the signature in question over a known autopen version and hold the two documents up to a light. If they're exactly the same, chances are that the top one was created with an autopen. But presidents often create multiple autopen signatures to make it less obvious when they're letting a machine do the work.

As for Obama's autopen signature on the extension of Patriot Act powers, it may pass the constitutional test, but not Koschal's.

"I'd pay peanuts for it," the autograph authenticator said. "It's not a real signature."