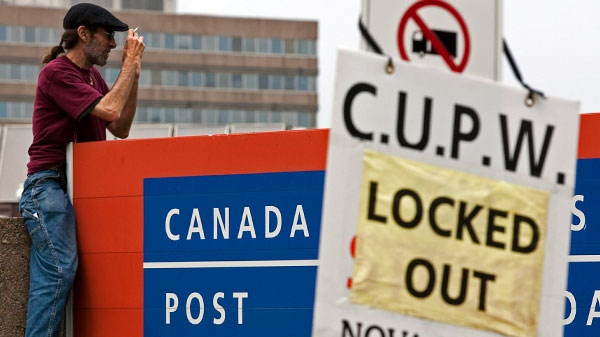 TORONTO - The weekend brought no movement on the postal front as negotiations remain stalled between Canada Post and its locked-out urban workers.

Both sides had said they were scheduled to meet, but face-to-face talks failed to materialize even as the dispute heads into a week where back-to-work legislation is likely to be tabled in Parliament.

Denis Lemelin, national president of the 48,000-member Canadian Union of Postal Workers, said he's bracing for a federal order to head back to the grind.

"We expect the government will put forward something," he said. "It's like the real negotiation between Canada Post and the union is finished."

Lemelin said the fact the government has indicated it might step in and "rescue" the post office in the labour dispute suggests Canada Post has been waiting for Ottawa to intervene ever since it locked-out employees last week.

Labour minister Lisa Raitt has said she intends to introduce legislation this week after all urban postal operations were suspended last Wednesday. Postal workers had been staging rotating strikes across the country since June 3 before they were locked-out.

"We will fight it, that's clear," said Lemelin, adding that the union has been in talks with the opposition parties, looking for support.

"For us the back-to-work legislation won't be any good for the future of the post office."

Meanwhile, Canada Post said it is still eager to work out a negotiated settlement with the union.

"We've said all along we are committed to negotiating," said spokesman Jon Hamilton. "We have come to the table with a sense of urgency that hasn't been met."

The Crown corporation said Sunday that there was still time to reach a deal without Ottawa stepping in if the union would look more closely at the existing deal on the table.

"The union strike activity had us in a death-spiral of uncertainty" said Hamilton. "We took action to try and move things forward, kick start the process, unfortunately we're not seeing that in return from the union."

The Crown corporation has said the main sticking point in the dispute is the union's demand for staffing levels beyond the capability of Canada Post, adding that wages were not the key disagreement. The union has been emphasizing working conditions and safety issues, as well as arguing that new employees would receive inferior wages and pensions.

NDP Leader Jack Layton has already weighed in on the labour dispute and the potential legislation the House might have to deal with next week.

"When it comes to the legislation itself, we'll read it, we don't support the notion of forcing workers back to work, especially when it's the government that has shut the doors of their work place," he said Sunday at the party's convention in Vancouver.

"What I believe the prime minister should do is open the doors to Canada Post. I don't think it's acceptable that a prime minister is allowing a Crown corporation that he controls to shut the doors of our postal service."

Layton added that a negotiated settlement between the two parties would be the best way to resolve the dispute.

The union and Canada Post are scheduled to talk Monday.

Labour analyst Maurice Mazerolle said both sides will have to act fast if they want to reach a deal without Ottawa's help as Raitt is unlikely to wait more than a week before passing legislation.

"I think the government is taking this very seriously," said the co-director of Ryerson University's Centre for Labour Management Relations, adding that the dispute had been handled well by both sides until the lock-out.

"My guess is the post office is betting that the government intervention will result in a better deal than one they could get with the postal union," said Mazerolle.

Despite the lock-out, volunteer postal workers will be delivering social assistance and pension cheques next week.