Natynczyk defends himself, MacKay in memo to troops 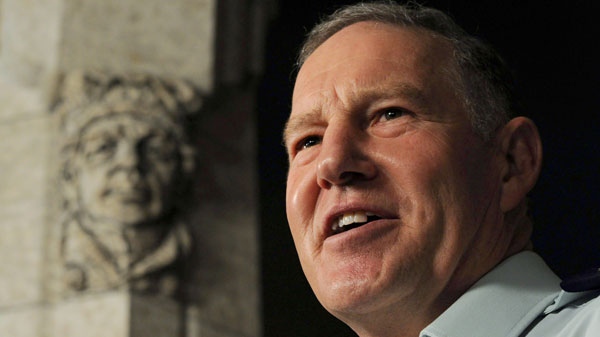 Chief of Defence Staff General Walter Natynczyk speaks to reporters in the foyer of the House of Commons on Parliament Hill in Ottawa, on Monday, September 19, 2011. (Sean Kilpatrick / THE CANADIAN PRESS)

Canada's top soldier Walter Natynczyk has sent a letter to members of the armed forces defending himself and Defence Minister Peter MacKay against "sensational speculation" about their use of military aircraft.

The letter appears designed to raise the spirits of Canadian Forces members who may be disheartened by recent media reports.

Both Chief of Defence Staff Gen. Natynczyk and MacKay have been the subject of recent media reports -- the story was first broken by CTV News -- about the costs associated with their use of military aircraft such as Challenger jets and search-and-rescue helicopters.

"As a public figure, I expect and welcome scrutiny, and stand prepared to be held accountable for my decisions," Natynczyk said in his letter.

"Nevertheless, I have been dismayed to see our Minister being unjustifiably criticized for the fine work he has been doing on behalf of the men and women of the CF and the Department. Accordingly, I want to provide you with my perspectives on this matter."

MacKay has taken heat over a flight on a Cormorant search-and-rescue helicopter that picked him up from a fishing lodge where he was vacationing with friends. MacKay said he took the flight in order to participate in a training exercise.

A CTV News investigation found that the total costs of MacKay's 35 flights aboard the government's Challenger jets since he became defence minister in 2007 amounted to $2,927,738.70.

CTV News reported that Natynczyk had spent more than $1 million since 2008 flying on government VIP aircraft to everything from sporting events to fundraising dinners, as well as to join his family on vacation after the death of a soldier in Afghanistan delayed his trip.

In his letter, Natynczyk said commercial flights are the cheapest and best means of air travel for the vast majority of the military's purposes.

But for senior military commanders, decisions cannot always be based on price, he said.

"In many cases, military aircraft offer security, scheduling, command and control, and flexibility advantages that cannot be matched at any price," he said.

Natynczyk noted that senior leaders need to be able to alter flight plans at a moment's notice whether abroad or carrying out a busy itinerary at home, in order to respond to immediate needs.

Commercial flights simply don't allow the flexibility that the Challenger fleet, or other Canadian Forces aircraft offer, he suggested.

Natynczyk also said "much of the media debate over per hour operating expenses has been misguided."

Once fixed costs, such as the price of the aircraft, flight crew and maintenance, as well as the need to reach a certain number of flying hours in order for pilot training, are factored in, "a reasonable argument for military airlift can be made under certain circumstances," he said.

"When one considers the clear operational advantages these aircraft offer in terms of their ability to enable command and liaison, medical evacuation, VIP transport, and short-notice delivery of high-value military equipment and personnel into operational theatres, I am confident that the Challengers continue to represent good value for money," he said.

Natynczyk said military department staff consider all factors, from costs to time savings, when considering whether to approve airlift requests.

"But where a sound cost-benefit argument can be made, particularly when there is the opportunity to provide the airlift at little or no incremental cost (by combining it with required training, for example), I consider use of military aircraft to be an appropriate and prudent expenditure of resources."

Natynczyk ended his letter by praising MacKay for his commitment to the military and his "sense of personal honour," and dismissed the suggestion he would do anything unethical.

"When we fly the Minister in CF aircraft, it is not only because his duties require it, but also because we are proud to support him in his work, and confident in his personal leadership," Natynczyk said.