MPs wrangle over whether to find Oda in contempt 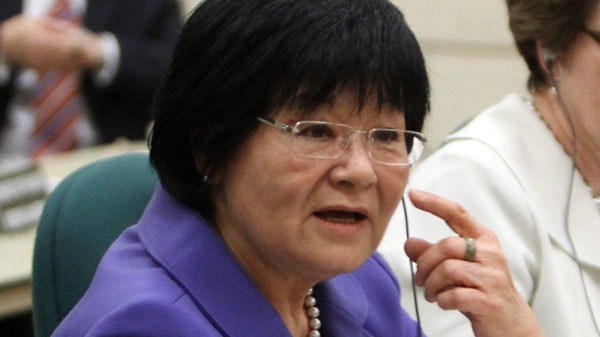 OTTAWA - A Commons committee is wrangling over whether to find International Co-operation Minister Bev Oda in contempt of Parliament.

Opposition MPs dominate the committee and are united in the belief that Oda should be found in contempt for misleading Parliament about an altered government document.

Liberals have produced proposed conclusions for the committee's final report on the affair, which is supposed to be tabled Friday in the House of Commons.

They assert that the "pattern of misinformation" and "limited truthfulness" has been so consistent over the past 14 months that a contempt finding against Oda is "inescapable."

However, Tory members of the committee maintain the proposed conclusions ignore the fact that Oda has clarified how the document came to be altered and apologized for the confusion.

Liberals contend the Tory protestations are designed to drag out proceedings and avoid a contempt citation before a possible election, which could be triggered this week over the budget or a Liberal non-confidence motion.

The committee is to resume deliberations Thursday.

The controversy revolves around an internal memo on which a handwritten "not" was added to reverse a recommendation by officials to fund an international relief organization.

Oda last week explained the "not" was added by her former chief of staff to reflect the minister's decision not to fund Kairos.

She admitted the paperwork was sloppy but said no other procedure existed at the time to reflect a ministerial decision to override the advice of officials at the Canadian International Development Agency.