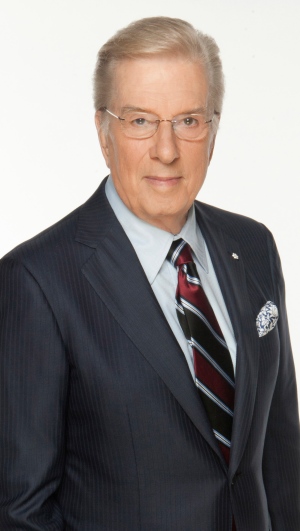 Canadian television icon Lloyd Robertson appears across CTV News properties and platforms as Special Correspondent. Formerly Host and Chief Correspondent for CTV’s investigative news series, W5, from which he stepped down in September 2016, Robertson remains one of the most trusted faces in television news. He spent 35 years as Chief Anchor and Senior Editor of the country's most-watched national newscast, CTV NATIONAL NEWS WITH LLOYD ROBERTSON.

One of the most accomplished journalists in North America, Robertson has been broadcasting for more than 60 years. He joined CTV in 1976, and held the title of CTV's Chief Anchor and Senior Editor since 1983. Throughout his illustrious career, Robertson has guided Canadians through some of the most significant events in recent history, including 9/11, the Quebec Referendum, 14 Canadian elections and numerous U.S. elections, the Gulf War, budget specials, political and economic summits, the 50th anniversary of D-Day, nine Olympic Games, royal weddings, Expo ‘86, openings of Parliament, state funerals, papal visits, and the Terry Fox Run.

In 1998, he became a Member of the Order of Canada, and in 2007 was the first journalist inducted into Canada's Walk of Fame.

Widely known for his baritone delivery and for his iconic signoff line, "And that's the kind of day it's been," Robertson announced on July 8, 2010 that he would vacate his anchor chair in 2011 after 35 years at CTV News.

• Honorary Doctoral Degree from Niagara University, US, May 2012

• Honoured with the Canadian Association of New York's Arts and Letters Award, October 2006

• Awarded the Order of Canada, February 1998

• Inducted into Canadian Association of Broadcasters Hall of Fame, 1998

• Voted Most Trusted TV Journalist by the readers of TV Guide for a record 11 times; voted Best Anchor twice