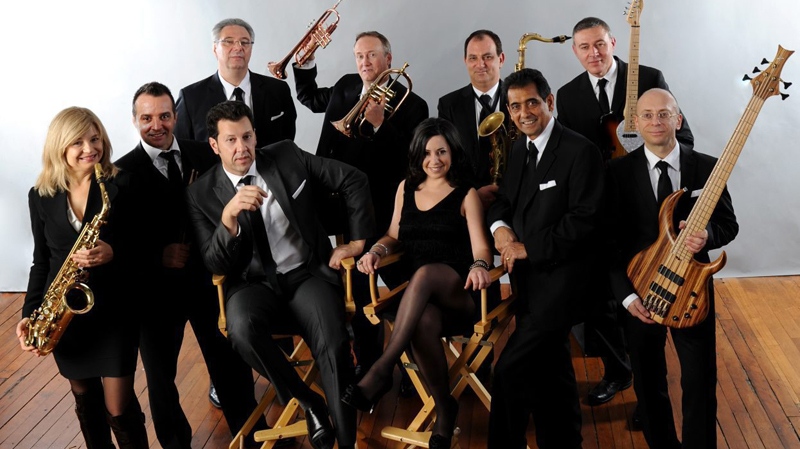 Montreal wedding band The Directors Showband are seen in this undated handout photo.

TORONTO - As far as auditions go, it's never a bad sign when you can get your prospective employer on his or her feet, singing and dancing.

That was the scene when the Montreal band the Directors auditioned for the new film "Barney's Version." Bandleaders Tony Picciuto and Randi Katz sat in for an interview in front of an imposing 10-person team that included Canadian uber-producer Robert Lantos and the film's director, Richard J. Lewis.

After roughly an hour of questioning, Lewis asked Picciuto and Katz if they knew how to play a hora, the lively Jewish wedding ritual. Katz figured that her dozen years of Hebrew school gave her licence to show off just a little bit with a live demonstration.

"That was my big moment," she recalled in a recent telephone interview from Montreal. "I got up, and I started singing the hora and in the middle of the office.

"I had all 10 people dancing the hora with me."

They got the part. And an impromptu interview dance session was far from the only surprising situation the band members would eventually find themselves in.

Picciuto, 52, has been a professional singer and bandleader for more than 35 years, playing weddings and corporate functions around Montreal. Katz, 35, joined the Directors a decade ago, sharing lead vocal duties with Picciuto in the 11-piece ensemble.

The group spent three "pretty gruelling" days on set for the film, arriving around 5:30 a.m. and staying until about 11 p.m. for wedding scenes shot at the swanky Ritz-Carlton Montreal.

"I had an onsite medic because I had these shoes from the 70s that were blistering my feet off," Katz said.

The band also had to be perpetually ready to adjust plans on the fly, nimbly altering arrangements, tempos or even song selections at the behest of producers.

Still, the sometimes arduous conditions of show business did nothing to dampen the band's excitement over being featured in a major Hollywood film.

The Directors' onscreen exposure is brief, but it arrives during one of the film's crucial scenes: Barney's ill-fated wedding to a spoiled socialite (Minnie Driver). While Barney and his father (Hoffman) get drunk and try to steal glances at the Habs-Bruins Stanley Cup final, the Directors provide the boisterous, 1970s era-appropriate soundtrack.

Picciuto is a lifelong film fanatic (the band's movie-themed name and website motif are not coincidences), so he didn't treat the opportunity lightly.

Even months after Katz and Picciuto first saw the film (which debuted at the Toronto International Film Festival in September), they couldn't contain their excitement as they chatted about their experience on set -- speaking in glowing terms about the film's personnel and often enthusiastically finishing each other's sentences.

"When we first got the call, I was in disbelief," Picciuto said. "I mean, we're a wedding band. We work, we do corporate events. ... When we walked in and saw some of the headshots of the cast, like Dustin Hoffamn, Paul Giamatti, I kept looking at Randi going, 'Oh my God, I can't believe this is happening.'

"It was really overwhelming for us, you know? ... It's like a dream come true."

"It's like a fairy tale, really," Katz jumped in.

Of course, that didn't stop Picciuto and Katz from pushing their luck.

Upon arriving to the set, the extras were informed -- by a production assistant with a bull horn, no less -- that no one was to approach the actors, because they were ensconced in method acting.

But Picciuto and Katz held out hope that they might surreptitiously snap a photo of one of the stars. Katz kept a camera within grasp, and Picciuto approached Lewis about whether he might nab a photo with a cast member or two.

He was told it would likely be OK, so long as he asked the actors, sometime after the end of the shoot.

He didn't need to wait that long.

On the first afternoon of filming, Picciuto felt a tap on his shoulder. He turned and it was Hoffman himself, who had wandered over to the band's stage and plunked himself down for a rest. As Picciuto remembers it, Hoffman asked him: "Is that all your music in the background playing? I gotta tell you, it's wonderful. It's amazing."

"So I look at him, and I hold my hand out, and I say: 'With all due respect, Mr. Hoffman, I am a huge fan and admirer of your work. But you're not supposed to be talking to me,"' Picciuto recalled.

"That's all I could think of to say! And he looks at me with that face and starts laughing. He goes, 'I'm a musician, you know.' And we had a keyboard up ... and he started playing piano with us. Oh my God, I can't believe it. I can't even describe it to you. It was surreal.

The other thrill for Picciuto and Katz was getting to see themselves onscreen.

Picciuto admits that he doggedly hassled post-production supervisor Douglas Wilkinson about how much screentime the group might receive ("I think at one point, he said: 'Tony, just so you know, the movie's not about the band,"' Picciuto said with a laugh), but ultimately he realized it wasn't that important.

"Honestly, our role is meaningless compared to the magnitude of the movie," he said. "The movie is so great."

Still, Katz and Picciuto admit that seeing themselves projected onscreen in a packed theatre during the Toronto film festival was an unforgettable experience.

"I was sitting there, and all of a sudden, as soon as the wedding scene starts, you hear the band playing," Picciuto said.

"My heart is beating," Katz added.

"And all of a sudden they cut to the hora, and Randi comes on the screen. And I wanted to yell: 'Could you rewind that?"'