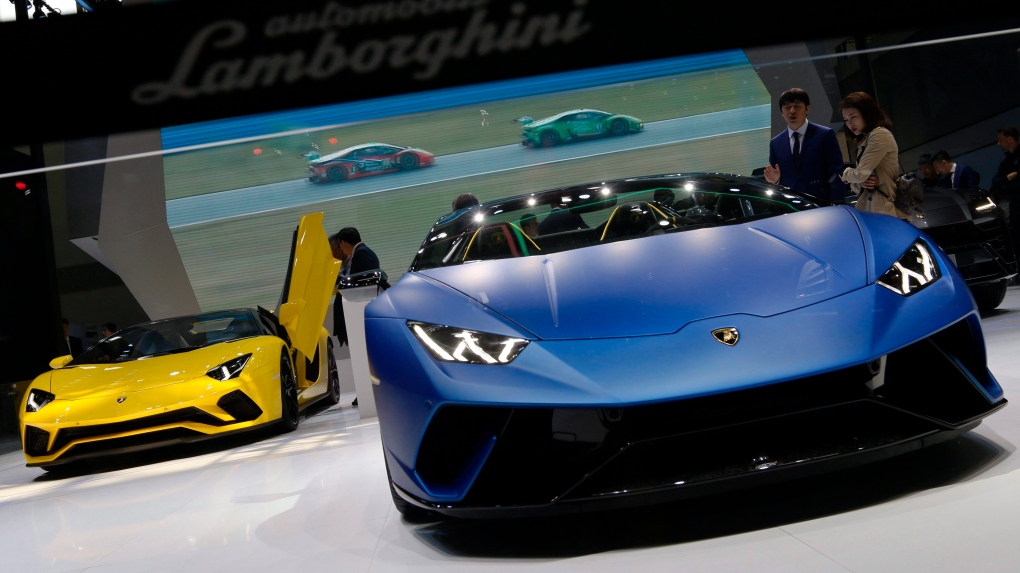 This file photo shows staff members chatting with visitors near the Lamborghini Huracan models on being displayed at the China Auto China in Beijing, April 26, 2018. (AP Photo/Andy Wong)

TORONTO -- A Florida man has been charged with fraud and other criminal offences after he allegedly used COVID-19 relief funds to buy a Lamborghini and other luxury items.

According to a statement from the U.S. Department of Justice on Monday, the 29-year-old man fraudulently applied for approximately US$13.5 million in Paycheck Protection Program (PPP) loans for different companies.

PPP was enacted in March as part of the Coronavirus Aid, Relief, and Economic Security Act in order to provide small businesses with forgivable loans to help them keep employees on the payroll and for other expenses.

It’s alleged that within days of receiving the loans, the man purchased a 2020 Lamborghini Huracan sports car for approximately $318,000, which he registered for jointly with his name and the name of one of his companies.

The complaint goes on to accuse the man of not making the payroll payments he claimed on his loan applications and instead using the money to make purchases at luxury retailers and resorts in Miami Beach.

The accused was arrested on Friday and authorities seized the Lamborghini and $3.4 million from bank accounts.

David T. Hines, of Miami, has been charged with one count of bank fraud, one count of making false statements to a financial institution and one count of engaging in transactions in unlawful proceeds. He was arrested on Friday and held in federal custody over the weekend before he was released on bond on Monday.

Hines is scheduled to be arraigned on Oct. 14.

This is how the U.S. could 'virtually eliminate' coronavirus in weeks: Ex-Obama health chief

As masks become mandatory in Montreal, tensions in the province escalate

Tenor Andrea Bocelli, who had COVID-19, says lockdown humiliated him