'Recoil effect': New Nanos polling shows Liberals may be out of majority territory

OTTAWA -- Anticipation that Prime Minister Justin Trudeau will trigger an election on Sunday has resulted in a “recoil effect” in the Liberals' ballot numbers, possibly moving them out of majority territory, according a survey conducted by Nanos Research.

The survey completed on Thursday night suggests that as the summer-long speculation of an election call shifted towards it looking more certain that Canadians are on the verge of being sent to the polls, voters have been swinging away from the Liberals.

“The latest Nanos tracking that was just completed on Thursday night, suggests that there has been a significant recoil effect against the Liberals. This hot speculation about an election has shifted voters from the Liberal column to the Conservative column, probably because they are upset about the fact that there is an election,” said Nanos Research's Nik Nanos in an interview with CTV News on Friday.

On Thursday sources confirmed to CTV News that Trudeau is expected to launch a federal election campaign on Aug. 15, with the vote set to be held as early as Sept. 20, with those who confirmed the planning indicating that it is still possible that the prime minister could adjust his plans.

When the news broke, Nanos said his daily tracking had the Liberals with “a double digit advantage.”

Now, while the Liberals are still leading in the polls, with 33.4 per cent ballot support, should the election call come this weekend, Nanos said that Trudeau will need a strong answer on day one of the campaign as to why an election is needed now.

“Was there something that you were not able to do?... There's no crisis to merit the triggering of an election, except for the fact that the Liberals want an election. And I think Canadians will probably see through that,” Nanos said.

The survey indicates that Liberal ballot support has dropped by 5.9 per cent from where it was four weeks ago.

The Conservatives appear to have made up some ground in that time, with 28.4 per cent ballot support, up 4.8 per cent from where they were four weeks ago.

“We're in a horse race now. It's no longer about whether the Liberals will win, and if they'll win a majority government. Now it's who will win this election?” Nanos said. 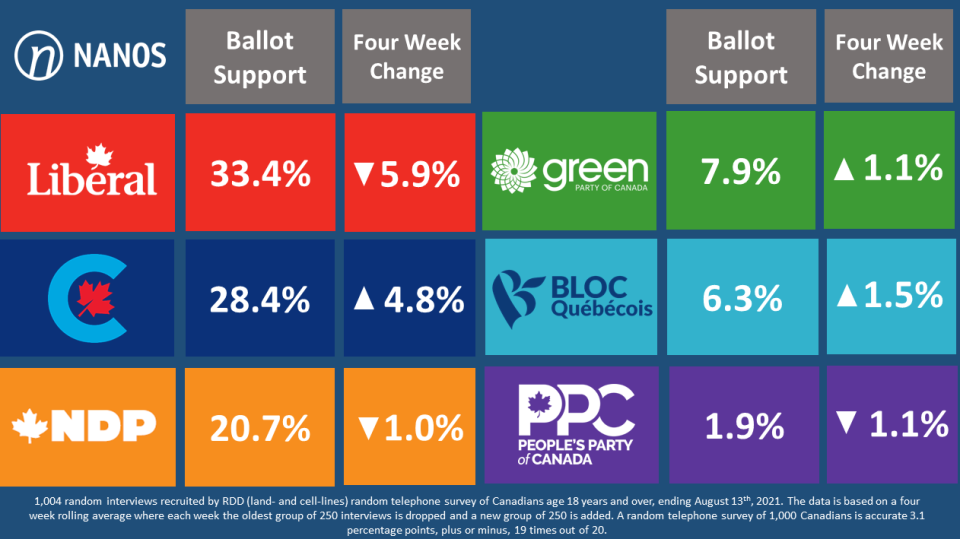 Nanos said that if this election becomes about Trudeau’s decision to call an early election in order to win a majority—which has widely been suggested a key motivating factor for the Liberals to trigger an election now—“it’ll be bad news for the Liberals.”

Polls conducted over the summer from various public opinion outlets signalled that the Liberals could be within reach of a majority government if a vote was held soon. Though, folks have expressed little enthusiasm to go to the polls, with the COVID-19 case counts once again on an upward trajectory.

Nanos said that had Trudeau called the election a bit earlier, they could have entered the campaign in a more secure electoral standing.

The data is based on a four week rolling average where each week the oldest group of 250 interviews is dropped and a new group of 250 is added.