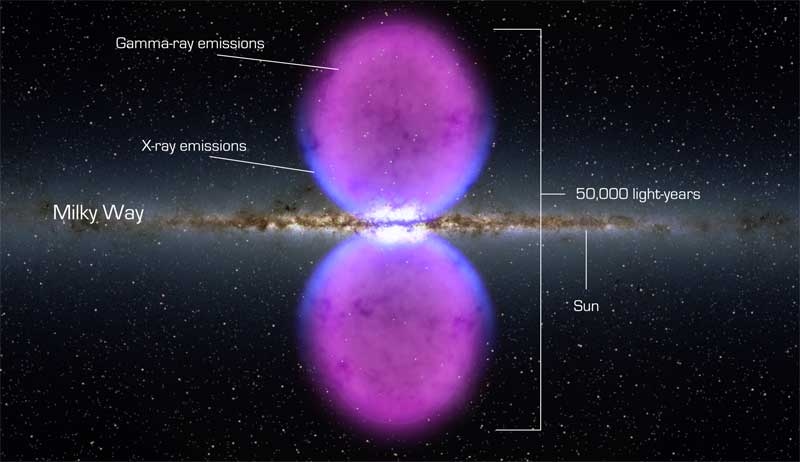 From end to end, the newly discovered gamma-ray bubbles extend 50,000 light-years, or roughly half of the Milky Way's diameter, as shown in this illustration.

Two massive and mysterious newly discovered structures in the centre of the Milky Way could be the product of a belching black hole.

NASA researchers found the huge gamma-ray bubbles when processing images from the Fermi Gamma-ray Space Telescope, a device that takes detailed pictures of the sky every three hours.

Together, the awe-inspiring structures span roughly 50,000 light years across, or about the same distance from the sun to the centre of the galaxy.

If they were visible to the human eye they would stretch about halfway across the sky.

But the structures only became visible through the work of Fermi, the most sensitive and high resolution gamma-ray detector in existence. Gamma rays are the highest energy form of light.

The astronomers who discovered the structures sifted through the gamma-ray fog clouding the images until they were able to filter out the noise and the structures began to take shape before their eyes.

During a news conference this week, David Spergel, a scientist at Princeton University in New Jersey, said there are two main hypotheses about how the structures came into existence.

One theory is that they were formed by a massive burst of star formation that occurred in the galaxy, creating a huge cloud of gas and energy.

The other is that the super massive black hole at the centre of the Milky Way swallowed something big, then released a post-meal energy burp that resulted in the formation of the structures.

It's been known to happen in other galaxies and could have happened here, Spergel said.

"We have a black hole at the centre of our galaxy that is four million times the mass of the sun," he told reporters during a NASA teleconference this week.

"And when matter falls onto that black hole it can drive a powerful jet that might be driving this material that creates these enormous bubbles."

Viewed in an artist's illustration created by NASA, the structure looks like two luminescent, purple, egg-shaped ovals sitting on top of one-another, intersected by the tiny-looking Milky Way.

In the actual images created from layers of processed Fermi data, the lobes are still there, but are white with flecks of red, surrounded by a sea of blue and red gamma-ray activity -- the Milky Way forming a white slash between the two ovals.

"What we see are two gamma-ray-emitting bubbles that extend 25,000 light-years north and south of the galactic centre," said Doug Finkbeiner, an astronomer at the Harvard-Smithsonian Center for Astrophysics in Cambridge, Mass., who first recognized the feature.

"We don't fully understand their nature or origin."

The sharp edges of the bubbles and the high energy recorded within them, suggest they are likely the result of a "large and relatively rapid energy release," NASA said in a release about the discovery.

X-ray images taken in the 1990s by a German-led mission showed hints that something might be there, but it wasn't until Fermi that NASA had high-enough resolution images that they were able to actually see the structures.

"As we sweep over the sky again and again and again we get a deeper and deeper picture of the high energy gamma rays and as the picture gets deeper we can see new classes of gamma ray sources."

The researchers plan to conduct more analysis to better understand how the structures formed and what it reveals about the formation of the galaxy itself.