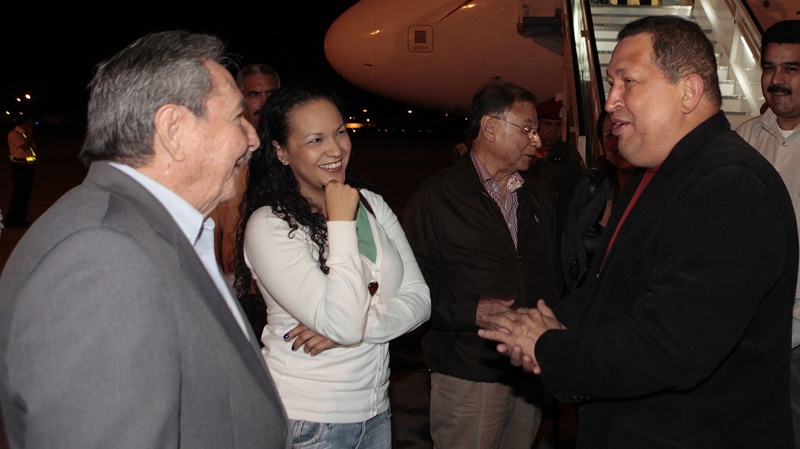 CARACAS, Venezuela - Venezuela's military high command reaffirmed its loyalty to President Hugo Chavez on Saturday in a public show of support a day after Chavez's departure for Cuba to undergo surgery removing a possibly cancerous tumour.

Military leaders said they were praying for Chavez's health and were confident of a full recovery.

"With you, everything; without you, nothing," Navy Adm. Anibal Brito said during a ceremony in the port of La Guaira to inaugurate a naval training vessel named after independence leader Simon Bolivar.

Military officers have used the phrase in the past to signal allegiance to Chavez, who is scheduled to have his third operation since last June, when a baseball-size tumour was removed from his pelvic region.

The leftist president was given a clean bill of health last fall and had declared himself cancer-free, but last week Cuban doctors found a new, smaller growth in the same part of his body. Chavez has said the growth is probably malignant but hasn't revealed what kind of cancer he has.

During 13 years in power, Chavez has sought to shore up support in the military from the rank-and-file up to the high command, mindful of the country's history of coups d'etats.

Chavez himself led a failed coup in 1992 that catapulted him into the public consciousness and paved the way for his election in 1998. He survived an unsuccessful putsch against his own presidency in 2002.

In recent days, he has accused his political rivals of intending to spread rumours of discontent and division within the military during his absence from the country, and trying to stir intrigue about his health in an election year in which he is seeking a fourth term.

On Saturday, the presence of the military high command and Vice-President Elias Jaua at the ceremony sent a message of unity.

"Today our commander in chief is here with us," Defence Minister and Gen. Henry Silva told cadets scheduled to sail on the Simon Bolivar. "His spirit as a revolutionary soldier is here."

Chavez, 57, flew to staunch ally Cuba on Friday after travelling by motorcade through the capital of Caracas.

Photos released by the Venezuelan government and brief video aired on state television showed the socialist leader being greeted at the Havana airport by Cuban President Raul Castro.

Chavez said he planned to meet with Cuban doctors for medical tests on Saturday. The surgery is expected to take place early next week.

"I have faith that everything will go well," Chavez told Venezuelan state television by telephone late Friday.

He said he brought with him a box of books to help pass the time, including the Spanish-language version of "TNT: The Power Within You," a self-help book by Claude Bristol and Harold Sherman. The book's subtitle reads: "How to release the forces inside you & get what you want!"