McDonald's Canada to spend $1B to renovate stores 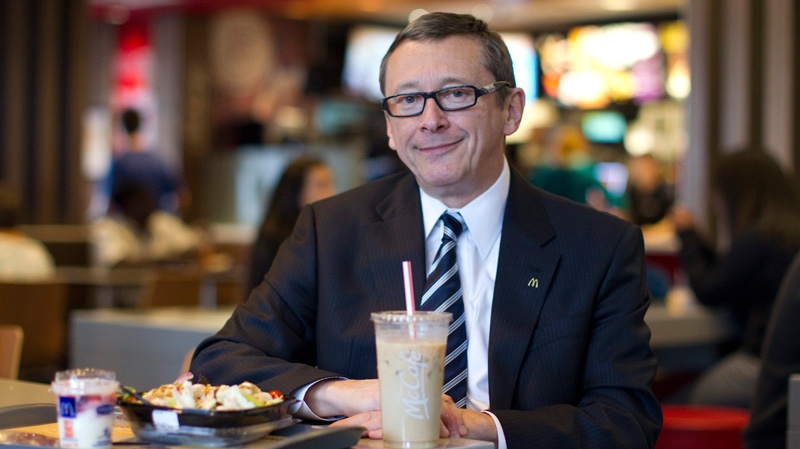 TORONTO - McDonald's is spending $1 billion to renovate all its Canadian locations in an effort to make its restaurants look cozier, raising the stakes in Canada's quick-service wars.

The fast food giant plans to spruce up 1,400 stores by next year -- tearing out the old plastic interiors, and replacing them with leather furniture, plasma televisions and fireplaces.

Exteriors are also getting a fresher look as the traditional McDonald's red roofs are replaced.

The announcement, made Wednesday, follows a similar facelift program announced in the United States earlier this year.

The chain that built its empire on burgers, fries and milk shakes says the changes are a response to changing customer habits in Canada's $19-billion per year fast food industry. Consumers increasingly hang out in environments akin to coffee shop Starbucks, which offers sofas and free wireless Internet.

"People tend to linger a little bit more in restaurants today. They want to enjoy their meals take a break from the busy lifestyle that they lead and we think our restaurants today are certainly doing that a lot better than in the past," McDonald's Canada CEO John Betts said.

The Canadian redesigns are based on formats used by McDonald's in Australia and parts of Europe. Construction is complete in some restaurants in Toronto and Montreal, and Betts said renovated stores have already succeeded in bringing in more customers.

"The business we've been enjoying from our reimaged restaurants or remodelled restaurants is close to double digits," he told The Canadian Press in an interview at one of the renovated stores in Toronto's east end.

That's higher foot traffic than the average. Analysts say annual growth in the quick service restaurant industry is normally between two and three per cent per year.

Betts added that while the chain is trying to make the restaurants more comfortable and inviting, it is also increasing fire power in the kitchen to offer new menu items, is enlarging the drive thrus to make them quicker, and will add McCafe products to a "large portion" of those stores. That includes fruit smoothies, pastries and higher-end coffees like lattes.

McDonald's (NYSE:MCD) said its renovations are a response to customer and store owner feedback. Remodelling stores is just another way the company is keeping up with changing times as it tries to shed its old fashioned image and become a healthy and hip hangout.

Accordingly, the chain has introduced new menu items like oatmeal and grilled chicken wraps, and offers free wireless Internet access across Canada. This month, McDonald's Canada also said it would revamp its children's Happy Meal by adding a serving of strawberry yogurt and a smaller, 31-gram serving of fries that contains 100 calories.

It comes at a time when major Canadian-owned rival Tim Hortons (TSX:THI) is beefing up its food offerings as fast food chains fight for a piece of Canadian spending.

"I think retailers are always are looking to innovate and move forward, because if you stay stale, the next thing you know, another competitor will be taking your customers," he said, but added that while renovations may bring new customers in, what's more important is having innovative products that will keep them coming back.

He said McDonald's Canada is nowhere near to matching the stronghold it has in the breakfast market in the United States, and while McDonald's is trying hard to achieve the same results in Canada, it is has so far been unable to chip away at Tim Hortons' dominance in the coffee industry. Meanwhile, analysts keep pressing Tim Hortons about the growing McCafe presence in Canada and the threat it poses.

Tim Hortons has said it plans to "vigorously defend" its position as the coffee market leader in Canada as competition from quick service restaurants like McDonald's heats up while they all try to capture a bigger share of the lucrative breakfast and snack markets.

McDonald's has given away 50 million free cups of coffee in the last two and a half years in an attempt to steal away market share from Tims, which Yarbrough said dominates 45 per cent of breakfast sales. Tim Hortons has about 3,200 locations in Canada, compared to 1,400 operated by McDonald's.

Betts hinted that additional future coffee giveaways could be on the horizon in Canada.

McDonald's isn't the only quick service restaurant to get a facelift as it fights for customers.

Burger King has begun swapping its generic fast-food feel for sleek interiors with rotating chandeliers and TV-screen menus and "burger bars," -- some of which serve alcohol -- aiming for a vibe that's more sit-down than drive-through at its worldwide 12,000 locations.

Meanwhile, some Canadian malls and retailers have launched their own renovations in time for 2012.

Major U.S. retailers, department stores and mall moguls are starting their Canadian renovations now so they will be ready in time for 2012, when consumers are expected to begin opening their wallets wider, creating huge demand for new shops and outlets as the economy is expected to grow.