Robot servers and 3D menus: The restaurant of the future? 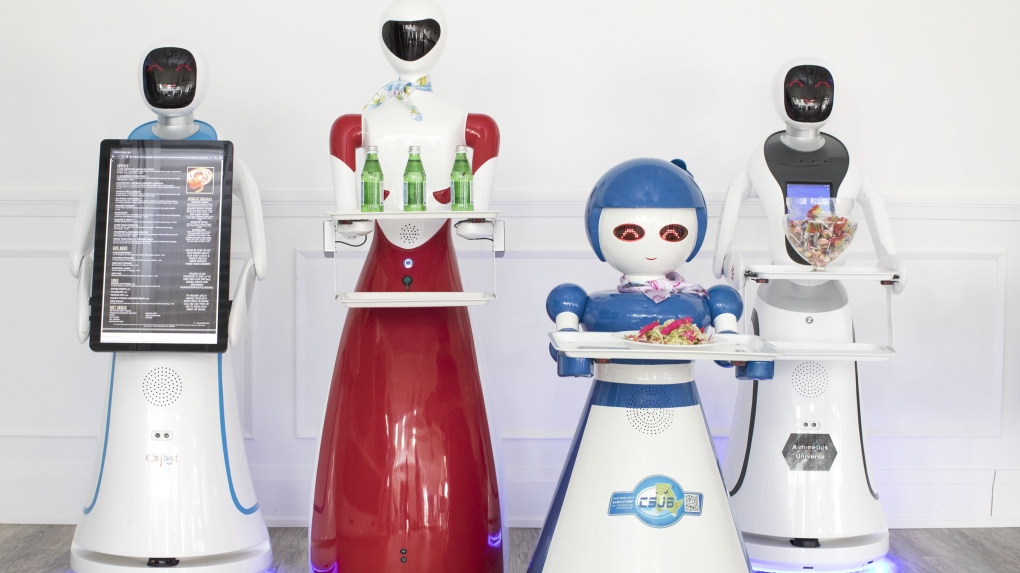 Patrons enter a cafe and pass by a hologram of coffee pouring from a carafe into a cup. They scroll through a three-dimensional menu and see exactly what each dish will look like to help them decide what to order. A small robot, arms fixed to a tray, delivers the meal to the table and says "Your food is here."

That is what the restaurant of the not-too-distant future looks like, say those developing the technology, which they argue can boost company profits and lower labour costs.

But so far, only a few eateries in Canada have embraced robotics and other high-tech offerings, and more owners may be hesitant to do so due to high costs in a low-margin industry.

"I think the robot will be the future in our life," said Fiona Jiang, a manager at Robo Sushi in Toronto that is staffed partly by robots.

At the restaurant, waist-high robots with two eyes and a smile permanently fixed on their faces guide patrons to empty seats.

Guests order food using an iPad and a different style of robot zooms between the kitchen and tables, bringing guests rolls, nigiri and other items. It might utter "excuse me" when it slips past a human body or "enjoy your meal" to diners about to eat.

The restaurant opened last year and claims to be the first of its kind in North America. So far, guests seem excited by the artificial intelligence servers, sharing videos and photos of the robots on social media.

"Everyone loves the robots... They're so cute," Jiang said.

Autonetics Universe sells a number of machines that can greet customers, take orders, display prices and promotions, and carry food and drinks, among other tasks.

Based in Aurora, Ont., the company distributes robots purchased from one Chinese firm and another in Japan, but is also working to develop robots in-house.

"Why not jump on the cutting, the leading edge of what's to come?" asked founder Ian McGowan when explaining why he decided to launch the company about two years ago.

So far, a restaurant is yet to purchase a service robot from Autonetics, he said. But he believes it won't be long before one of his robots is greeting customers, taking orders or serving guests in a Canadian restaurant -- though he said he can't put a date on it.

He noted Canada is fairly new to incorporating robotics into retail, whereas he finds it's more common in other countries.

Part of the hesitation could come from sticker shock as money is the first factor Jiang points to as a reason more restaurants don't deploy robots.

McGowan said the service robots Autonetics sells run from about $7,000 to $25,000 or higher, depending on what additional parts a buyer wants. Some initial support is included, but beyond that repairs and training are extra.

However, he believes restaurateurs may also be slow to add robot staff because no one's brought the product to market in Canada yet. McGowan is trying to bring businesses on board by showing them the benefits of automation.

"I can see them lowering some labour costs," he said, making sure to highlight that it also creates jobs in technology.

At this year's RC Show, an annual trade and conference show put on by the industry association Restaurants Canada held in Toronto in late February, industry insiders marvelled at the robots McGowan displayed at his booth.

"No shortage of: 'You guys are the coolest thing in the show,"' he said.

The restaurant of the future was a big theme at the annual show where Toronto-based 3D Food and Drink launched its new technology which allows customers to use their phones to see realistic, three-dimensional representations of menu items.

"It brings the menus to life," said Alan Smithson, founder of Mississauga, Ont.-based Metavrse, which invested in the 3D-menu company.

McGowan also expects holograms -- three-dimensional videos that don't require any special glasses or technology to view -- will soon be in more eateries as the technology sells itself and lures customers in. He recently sold one to a coffee shop, which might use it to display coffee being poured into a cup, for example.

"I think a lot of people are just going to come to the coffee shop just to see that thing."