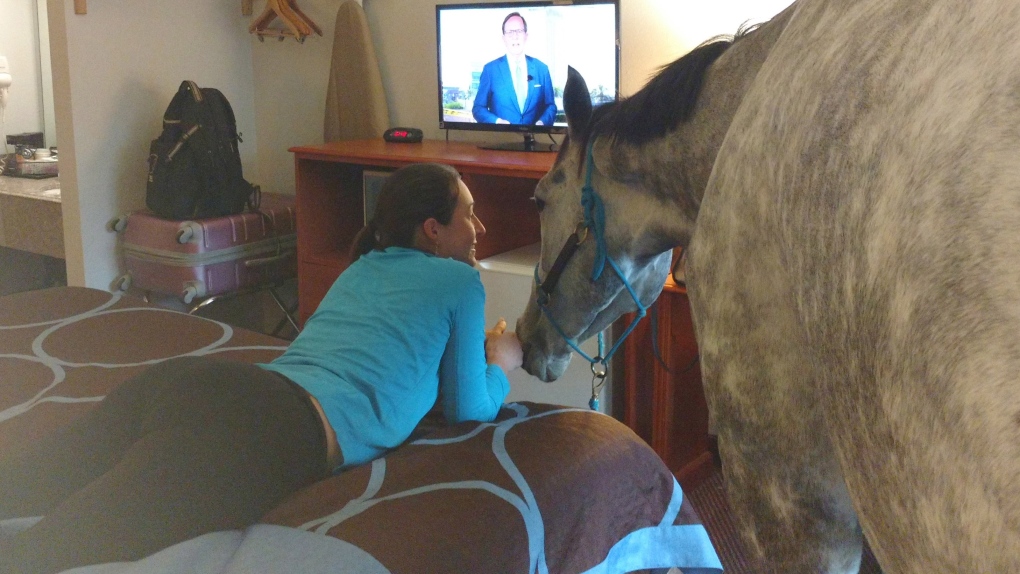 A Kentucky motel's pet-friendly policy was put to the test earlier this month when an Ontario woman checked her horse into a room on her way to a competition.

Lindsey Partridge, of Kawartha Lakes, Ont., said she was travelling with three horses to the Retired Racehorse Project's Thoroughbred Makeover competition on Oct. 4 when she stopped to check in to the Super 8 motel in Georgetown, Ky.

When she saw other guests bring in a dog, Partridge said she jokingly asked the clerk if the motel's pet-friendly policy would extend to her horse.

"The lady at the desk just said, 'Oh yeah, I wouldn't care, go ahead, bring your horse in,"' said Partridge, who buys retired racehorses and trains them at her facility east of Toronto.

"I asked twice and then I quickly go get the horse before she changes her mind."

The horse trainer took her grey thoroughbred mare Blizz, who races under the name Here Comes Adri, to the front desk and shot a video of the process while other motel guests watched and took photos, she said. Partridge also took Blizz briefly into her room and took photos of the two of them watching television together.

The goal was to show that thoroughbred horses, which Partridge said have a reputation for being temperamental, can be calm even in unusual situations, she said.

"They just have such a negative stereotype against them and unfortunately a lot of those horses do end up going to auction for slaughter," she said. "What I try to do is just try to show people that these are great horses that can be really calm and you can handle them really nicely."

Blizz seemed a little confused when they first went into the motel lobby, "but she was OK with it, she trusts me well," she said.

"And then when we were in the hotel room, she thought it was the best thing ever because I was just sharing cookies with her on the bed," she said.

Though Blizz's brief motel stay went well, Partridge said she would hesitate to keep a horse in a room overnight.

"I think maybe I would have to get a horsey diaper or something like that. I think the cleaning bill would be maybe a little high," she said.

"But also, horses only sleep three to four hours a night so she might be trying to keep me up all night watching TV."