The battle over the world’s biggest moose statue is officially on.

For 31 years, Mac the Moose in Moose Jaw, Sask., was the tallest moose statue in the world, standing nearly 10 metres in height. That is, until it was dethroned when Norway erected its own giant elk statue in October 2015.

Moose Jaw Mayor Fraser Tolmie said Mac’s title was usurped by the Norwegian municipality of Stor-Elvdal and his city wants its bragging rights back.

“I’m doing this on behalf of Canada. Our pride is on the line here,” he told CTV News Channel on Friday during in a joint interview with the Norwegian town’s deputy mayor. “I say bring it on.”

The fight heated up after city officials in Stor-Elvdal posted a series of videos gently mocking Moose Jaw’s attempt to outdo their giant elk.

“Sorry to disappoint you guys. We are going to continue our work to make sure that our moose is the biggest moose in the world -- for many years to come,” the town’s deputy mayor Linda Otnes Henriksen said in the video sent to CTVNews.ca.

She told CTV News Channel it makes sense that Moose Jaw wants to sit “on top of the throne” again, after it dropped to second place four years ago.

Norway’s silver elk “Storelgen” -- which means “Big Moose” in English -- stands at 10.3 metres, which is just over 50 centimetres taller than Mac the Moose.

But couldn’t Canada and Norway simply get along and not quibble over a few inches? Henriksen said of course they could. But facts are facts.

“Canadians [can] think of their moose as the biggest moose in the world and we’ll think of ours [that way too] -- even though ours is a little bit taller, you know?” she laughed. “We still have the title, so we’re happy with that.”

Tolmie said his fight wasn’t simply about one Canadian town. Rather, this was about trying to “protect Canada’s national treasures.”

“The CN Tower used to be the tallest free-standing building in the world [and] we can’t change that, but we can do something about Mac the Moose,” he said. 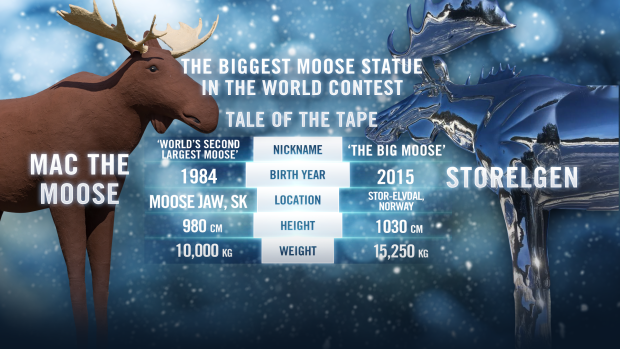 The fight is even more personal for Tolmie who said Mac the Moose was named after his wife’s great uncle and late city councillor, Les MacKenzie.

“This is moose blood. We’re connected,” he said.

Tolmie also bristled at the suggestion that Norway probably hadn’t wanted to create an international incident over a moose. Because if that were true, he said, Norway would have made their moose the same size.

“But no -- that didn’t happen. They went ahead and built a moose bigger than ours purposefully,” he said.

A GoFundMe campaign is underway with the goal of raising $50,000 for Mac’s reconstructing costs. Some ideas included placing a hat on Mac, giving him skates, a hockey stick or sculpting larger antlers.

But if Moose Jaw is successful in making their moose larger, Stor-Elvdal’s deputy mayor said it wouldn’t matter in the long run.

“The artist that made this one [in Norway] has been in touch to try and figure out ways to make an even bigger moose that’s twice its size,” Henriksen laughed. “So we’ll see what’s to come.”

Henriksen even suggested they could build an even taller moose and place it shoulder-to-shoulder with their original one.

But to that, Tolmie had a gentle warning to Henriksen.

“I say it’s on. But I don’t want to see the Norwegian government bankrupt over this situation because we will win this race,” he said.