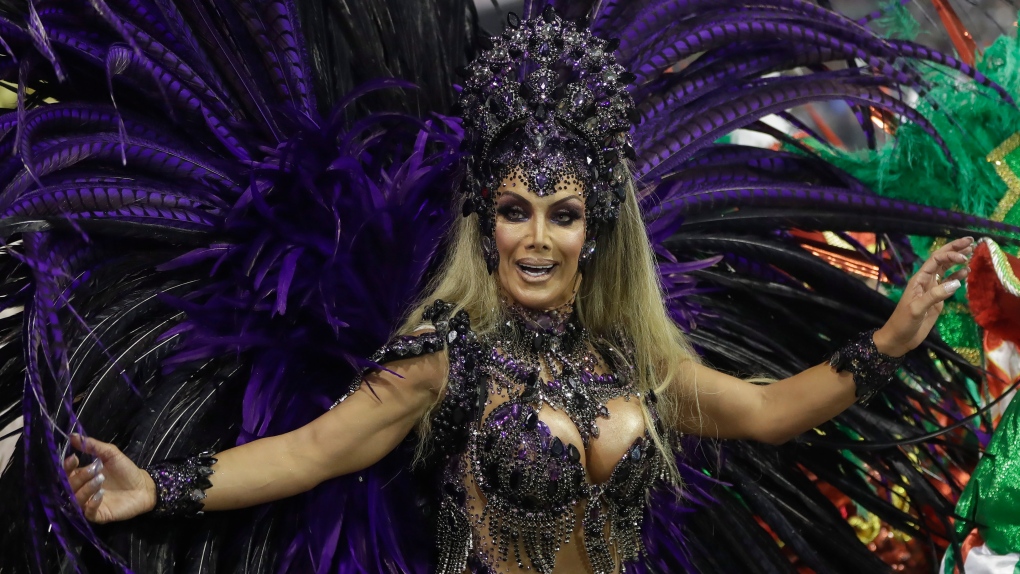 Prins says she first realized she wanted to be a woman at a Carnival party at age 11, when, like the other boys, she was allowed to dress like a girl as part of the burlesque festivities. Now, in the final minutes of Saturday, she became the first transgender woman to lead the drum section of a top samba school in either of the renowned Carnival parades put in Sao Paulo and Rio de Janeiro.

Prins, 40, was hand-picked to be "godmother" of the Colorado do Bras samba school's drum section, an iconic role fought over by dozens of models and TV celebrities. Her duty was to dance infectiously for 65 minutes in front of the drummers, using her legs to drive their rhythm while judges assessed the school's parade.

"Gorgeous women wanted to be here. I'm very excited because this shows we can be anywhere. We can be godmother of the drummers, we can be owners of a samba school," Prins told The Associated Press before the parade. "Soon they will see many other transgender girls, who will find it easier than I did."

Colorado do Bras, which rose to Sao Paulo's top samba league only two years ago, made a bold decision in picking Prins for the role, despite Brazil's Carnival being a party at which few things have never been tried.

Transgender people remain something of a taboo among Brazilians, even in Sao Paulo, the country's most cosmopolitan city and host to the world's largest gay pride parade. Brazil has more slayings of transvestites and transgender people than any country in the world. In 2019, 124 were killed, 21 of them in Sao Paulo state.

As godmother of the drum section, Prins teamed up with a drum queen who has a similar role, and together they worked to dazzle fans in the Sambadrome bleachers with their beauty and sex appeal. Prins said she was counting on her penetrating brown eyes, long blond hair, strong legs, open smile and imposing breasts to help win points from the judges.

Colorado do Bras finished the 2019 parade in 11th place, only two spots above the cutoff for being relegated back to a lower league. Directors of the samba school decided to try for something different this year, since the group has fewer resources than richer samba schools. Its floats and costumes were clearly less luxurious than the main challengers for the title.

Keila Simpson, president of Brazil's National Association of Transvestites and Transsexuals, was happy Prins secured her prominent Carnival role, and said their community aims to make cases like hers the new normal.

"We have to be proud of Camila and hope her symbolic message allows us to think of reducing violence against trans people. Why can people celebrate her at the Sambadrome while trans people on the street are subject to violence?" Simpson said. "We don't have data, but there are many violent cases against us during Carnival. Because there's more of us outside, there's more attacks."

Sao Paulo is trying to root out persecution of LGBT people during Carnival, and this year set up 20 tents spread among major street parties to handle cases of violence against the community. Psychologists, police officers and social workers are on hand until Wednesday for revelers who are victimized.

English teacher Alessandra Salvador, a transgender woman who encouraged revelers to come to the city hall tent at the LGBT street party Minhoqueens, said she was excited by Prins' selection.

"I don't even watch parades that much, but this year I will when she is on," Salvador said. "It is good to see one of us being talked up. We don't get it so often. If we don't get that in Carnival, we won't get it anywhere else."

It's been a long road for Prins to reach the big leagues. She has worked as a professional dancer for 20 years and, though she lives in a small town in Switzerland with her husband, practices her steps at home all year and listens to samba incessantly. As Carnival nears, she splits her dance routine with ab workouts and squats at a gym, then makes her annual return to Brazil.

Prins' first time dancing as a samba school's godmother came in 2018, in the second division of Sao Paulo's Carnival league. And it wasn't easy.

"Many people turned their backs, because they thought I shouldn't be there. They thought it was a role for a woman," Prins said. "Little by little I won them over with a lot of respect and true dancing."

Prins said her friends in Switzerland feared for her because of the increase in violence against transgender people, and because of the rise of far-right political groups in Brazil. She said she was worried about an increase in hateful comments aimed at LGBT people since President Jair Bolsonaro took office Jan. 1, 2019, but she planned to keep her smile and march on.

Just before midnight, when Colorado do Bras finally started its parade, a TV Globo reporter approached a tearful Prins in front of her drummers. She was already the most talked about of all 2,200 members of the samba school, even more than eight young topless women dressed as "goddesses of the sea."

"I feel so blessed this is happening. I came here to hold my banner and dance samba to the face of prejudice, for all the LGBT community," she said. "Trans girls, I am sure your day will come, too. I am just the first, many more of you will follow."