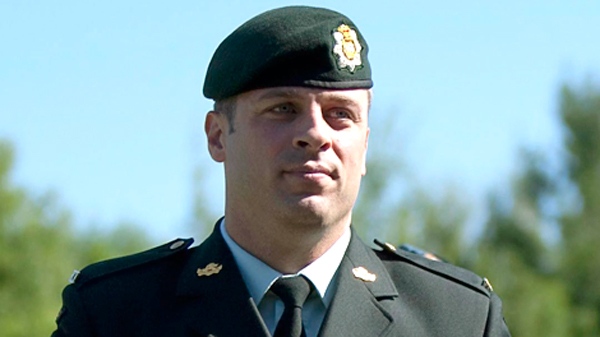 Capt. Robert Semrau arrives to court for the start of sentencing argument in his court martial in Gatineau. Que., on Monday July 26, 2010. (Sean Kilpatrick / THE CANADIAN PRESS)

GATINEAU, Que. - It's now up to a military judge to decide if Capt. Robert Semrau gets busted down in rank with a hard slap on the wrist, or gets booted from the Canadian Forces and thrown in jail.

Lt.-Col. Jean-Guy Perron will take until Sept. 9 to mull arguments by both the prosecution and defence before sentencing the 36-year-old officer.

Military prosecutors say Semrau should be dismissed in disgrace from the Canadian Forces and spend two years, less a day, in jail for shooting an unarmed enemy fighter as he lay dying on the battlefield.

But Semrau's lawyer says a reduction in rank and a severe reprimand are more fitting punishments.

Semrau was convicted last week of disgraceful conduct in the shooting and a military court on Tuesday heard final arguments on sentencing.

The conviction carries a maximum penalty of five years in prison and dismissal from the military.

Prosecutor Lt.-Col. Mario Leveillee said Semrau tarnished the Canadian Forces when he fired two rounds into an insurgent who had been strafed by a U.S. gunship helicopter.

"Capt. Semrau was to act as a role model for a foreign army that we are trying to develop as a professional force, just like ours," Leveillee said.

"He failed in an environment and a situation that is the ultimate test for a soldier and officer. The ultimate challenge, that of demonstrating one's discipline on the battlefield."

Leveillee questioned whether the public would feel differently had Semrau shot a grievously wounded Canadian soldier in an act of mercy.

Leveillee cautioned against letting Canadian soldiers make their own battlefield decisions based on their beliefs and morals, rather than following orders.

"Only Capt. Semrau knows what his motivation was," he said.

"But whatever his motivations, it was a shockingly inappropriate choice."

The prosecutor also raised the spectre of the Somalia affair of the 1990s, saying all it takes is an act like Semrau's to bring back memories of Canadian soldiers beating a Somali teen to death.

Semrau's lawyer, Maj. Steve Turner, rejected the comparison. He called Somalia the "bogeyman" that haunts the military to this day.

"This isn't that type of situation," Turner said.

Semrau was also charged with second-degree and attempted murder, but the court martial panel found him not guilty of those charges as well as not guilty on a Defence Act charge of negligent performance of a military duty.

Over the four-month trial, which included time in Afghanistan, the court heard from a dozen witnesses. The testimony included descriptions of what Semrau was alleged to have said in the moments after he fired two rounds in the direction of a badly wounded insurgent.

The man had suffered terrible wounds in the helicopter attack and witnesses described devastating injuries, including a severed leg and a gaping hole in his abdomen.

At the time of the 2006 shooting, Semrau was part of a team of Canadian soldiers assigned to the Afghanistan National Army as mentors.