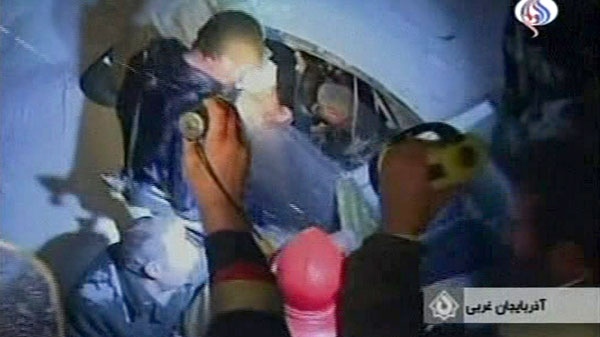 In this image made from TV rescue workers attend the scene after an IranAir passenger jet carrying around 100 people crashed as it was making an emergency landing, Sunday Jan. 9 2011. (AP / Al Alam)

At least 72 people are reported to be dead after a passenger jet crashed in a snowstorm in northwest Iran on Sunday night, leaving 33 survivors, according to Iranian media outlets.

The IranAir passenger jet was attempting an emergency landing in Orumiyeh, about 700 kilometres northwest of the capital Tehran, when it hit the ground and broke into pieces, according to the Islamic Republic News Agency.

On its website, Iran's Legal Medicine Organization is reporting that 72 of the 105 people on board were killed, while 33 were injured but alive.

The flight crew and child passengers are among the dead, the organization reported.

Some Iranian media outlets reported that the plane was carrying 106 people.

The cause of the crash hasn't been confirmed.

However, the semiofficial Mehr news agency, quoting a deputy provincial governor, Ebrahim Fatholahi, reported that the pilots of the Boeing-727 attempted the emergency landing after reporting a technical failure to the control tower. The nature of the technical failure wasn't disclosed.

Reports stated the plane took off from Mehrabad International Airport in Tehran and was en route to Orumiyeh International Aiport. The plane approached the runway to land but was forced to delay the landing due to bad weather.

Iranian news agencies reported that the plane vanished from radar screen and crashed in farmland about 15 km outside Orumiyeh, located near Iran's border with Turkey, after making a second attempt to land.

Some of the passengers were only lightly wounded and able to walk off the plane and some had to be hospitalized, Mosayebi said.

However, there are reports that several people were critically injured and rushed to hospitals in Orumiyeh and Tabriz.

Reports from Iran indicate that rescue efforts were hampered by up to 70 centimetres of snowfall. Visibility was poor at the time, the Iranian Legal Medicine Organization reported.

Iran has a history of frequent air accidents blamed on its aging aircraft and poor maintenance. IranAir's fleet includes Boeing and Airbus aircraft, many of them bought before the country's 1979 Islamic Revolution.

Iranian airlines, including those run by the state, are chronically strapped for cash, and maintenance has suffered, experts say. U.S. sanctions prevent Iran from updating its 30-year-old American aircraft and make it difficult to get European spare parts or planes as well.

The country has come to rely on Russian aircraft, many of them Soviet-era planes that are harder to maintain since the Soviet Union's fall.