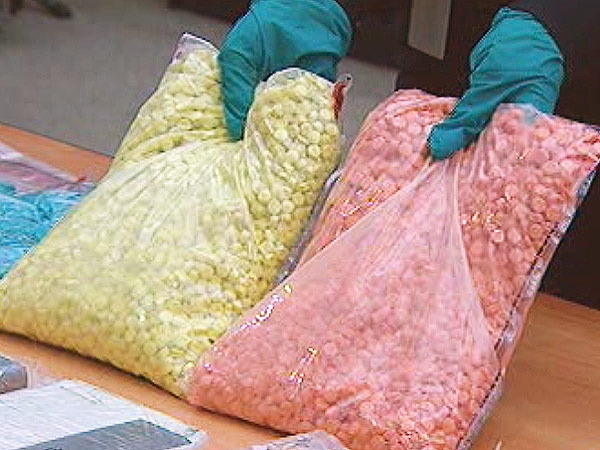 Police found more than 15,000 pills that look like Ecstacy, but could be Meth.

VIENNA - Dangerous drugs that may seem safe at first because they're made to dodge bans are being produced more quickly and in greater numbers, often with instructions readily available online, a watchdog warned Wednesday.

Governments should step up their efforts to crack down on so-called designer drugs by closely monitoring abuse trends and making new substances illegal as soon as possible, the International Narcotics Control Board said in its annual report.

"Given the health risks posed by the abuse of designer drugs, we urge governments to adopt national control measures to prevent the manufacture, trafficking in and abuse of these substances," said Hamid Ghodse, the board's president.

While 16 such new drugs are currently being monitored in Europe, Japan recently placed 51 under national control, the report said, adding that a growing number of countries and regions have detected such stimulants.

According to the report, designer drugs are often made by tweaking the molecular structure of illegal substances to create a new product with a comparable effect. They include the party drug mephedrone, sometimes also known as "meow meow," whose effects are reported to be similar to cocaine, amphetamine and ecstasy.

"They can be easily manufactured, as instructions on their manufacture and a description of their pharmacological effects are often found on the Internet," the report said, adding governments should consider making groups of substances illegal at a time to slow the process of finding replacements for them.

The report also included these findings: