Interest rates have 'nowhere to go but up' says Flaherty 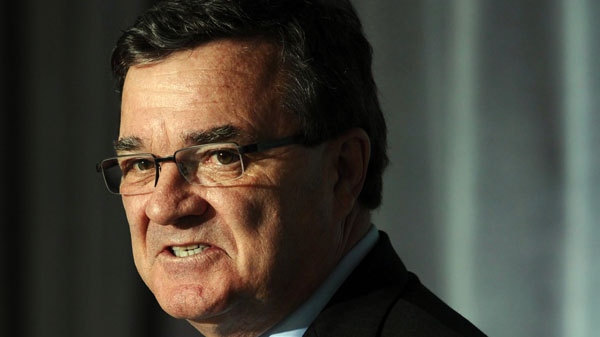 Warning about the dangers of unchecked debt on both a global and household scale, Finance Minister Jim Flaherty on Sunday said Europe and the U.S. must do more to restore stability in their own backyards -- just as Canadians must tread carefully when taking on long-term debt like mortgages.

"We are cautioning people not to assume too much long-term debt on the assumption that interest rates will stay as low as they are -- because they won't," Flaherty said Sunday on CTV's Question Period.

"We want to make sure Canadian households plan ahead and know, if they renew a mortgage in the next several years, it's likely that the interest rate will be higher," he added.

"Interest rates have nowhere to go but up."

Flaherty's remarks echo those of a Bank of Canada report last week that said high household debt is now the most significant risk to the Canadian economy.

The report came one day after Statistics Canada noted that "rock-bottom" interest rates are luring more Canadians deeper into debt. The ratio of household debt rose to 149.47 per cent in the first quarter of 2011, meaning Canadians owe $1.49 for every after-tax dollar they earn.

Statistics Canada also said Canadian debt ratios are "leaving their U.S. counterparts in the rear-view mirror, despite the repeated exhortations by domestic policymakers to rein in borrowing."

Flaherty warned that Canada and other countries could be hurt unless more is done to help the ailing economy of Greece.

"We think there is a danger of contagion if there is a failure in Greece," said Flaherty, noting that its money troubles could spread to banks elsewhere in the EU, leading to a credit crisis similar to that of 2007.

Flaherty said protecting the European and, by extension, world economies would probably require "a substantial package" for Greece from the EU and IMF.

Closer to home the minister added that the runaway debt and deficit in the U.S. is also a "serious concern" that needs to be addressed before the next presidential election in order to restore confidence in the U.S. economy.

Despite the uncertainties in the global economy, Flaherty said the government's plan to eliminate the federal deficit within three years is still "on track."

"We do expect some softening in growth the latter part of this year," he said, "but overall for this year we're exactly where we should be."