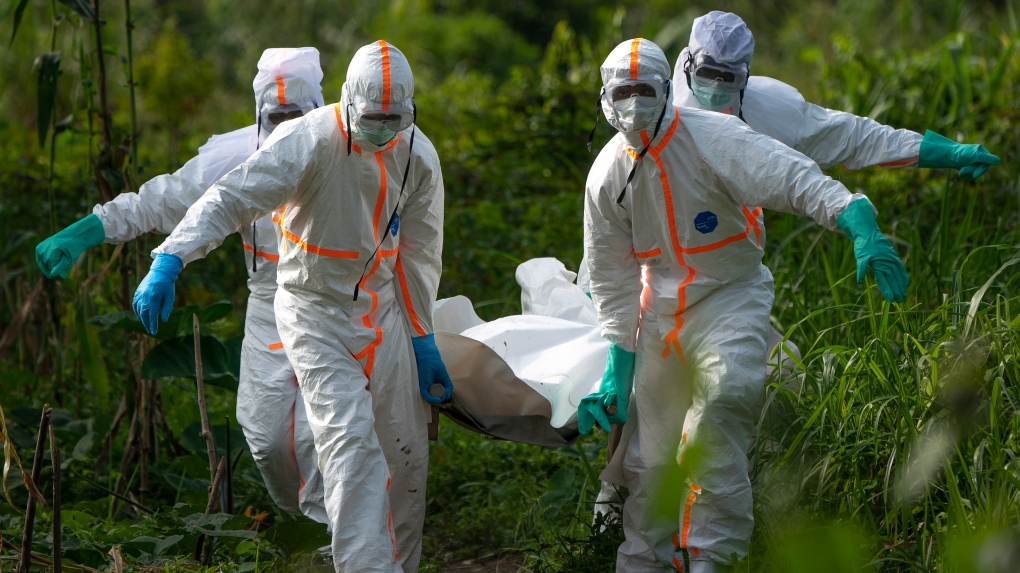 In this Sunday, July 14 fike, 2019 photo, burial workers dressed in protective gear carry the remains someone that died of Ebola, in Beni, Congo. The World Health Organization has issued an unusual statement raising questions about whether Tanzania is covering up possible cases of the deadly Ebola virus.(AP Photo/Jerome Delay)

JOHANNESBURG -- The World Health Organization has issued an unusual statement raising questions about whether Tanzania is covering up possible cases of the deadly Ebola virus, a significant cause for concern during a regional outbreak that has been declared a rare global health emergency.

The statement Saturday says Tanzania's government "despite several requests" is refusing to share the results of its investigations into a number of patients with Ebola-like symptoms and is refusing to ship patient samples to an outside WHO partner lab.

Tanzania's government, which has said it has no Ebola cases, could not immediately be reached for comment Sunday. The cases would be the first-ever Ebola infections confirmed in the East African country.

The United Nations health agency says it was made aware on Sept. 10 of the death in Tanzania's commercial capital, Dar es Salaam, of a patient suspected to have Ebola. A day later, it received unofficial reports that an Ebola test had come back positive. On Thursday, it received unofficial reports that a contact of the patient, who had travelled widely in the country, was sick and hospitalized.

A rapid response is crucial in containing Ebola, which can be fatal in up to 90% of cases and is most often spread by close contact with bodily fluids of people exhibiting symptoms or with contaminated objects.

The WHO statement said the lack of information from Tanzania made it difficult to assess potential risks.

This is not the first time health officials have raised serious questions about the suspected Tanzania cases. On Monday, the U.S. health and human services secretary, Alex Azar, told reporters in Uganda that he and others were "very concerned about the lack of transparency" in Tanzania.

Critics have shown increasing alarm as Tanzanian President John Magufuli's government has restricted access to key information and cracked down on perceived dissent. Lawmakers recently approved an amendment to a statistics law to make it a crime to distribute information not sanctioned by the government or which contradicts the government.

The World Bank was among those expressing concern at that amendment.