Trudeau opens up about his family's struggles with mental health 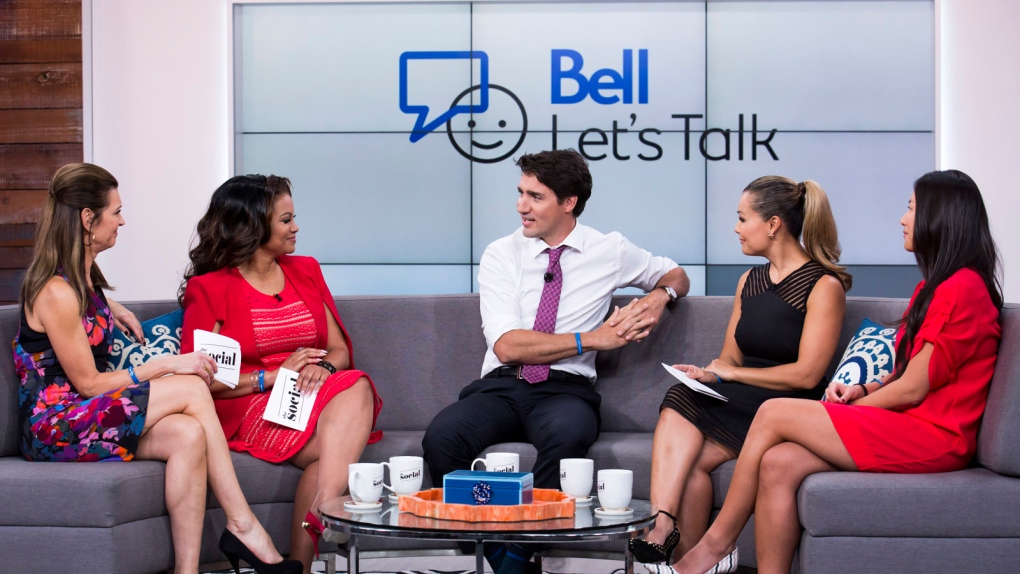 Prime Minister Justin Trudeau speaks with the hosts of The Social on Bell Let's Talk Day.

Prime Minister Justin Trudeau says he first made the link between mental health issues and his own family's struggles -- including his parents' public divorce -- when he was in his 20s and looking at old pictures of his mother.

Trudeau, now 44, told CTV's The Social on Wednesday that mental illness was taboo when he was growing up in the 1970s and there was no way to describe the difficulties facing his family.

"I was looking over old pictures of my mom and we sort of pointed out to her, 'Oh, mom your hair was really short that day,’ or 'You look thin,' and she was like 'Oh yeah, I was really fighting depression at that moment,'" Trudeau recalled.

"It was just totally out of the blue. I sort of look back and go, 'Oh, of course that makes sense,' but there was no vocabulary for talking about that back then."

Trudeau's mother, Margaret, married his father, who was then serving his first term as prime minister, when she was 22 years old. He said their marriage crumbled, in part, because of the elder Trudeau's frequent absences, which left Margaret Trudeau at home to care for her three children. Margaret Trudeau also struggled with depression and bipolar disorder.

The couple separated in 1977, and Pierre Trudeau was given custody of the children.

Trudeau said that his experiences growing up around his parents taught him about the different forms of strength that people have.

"I had a dad who had almost superhero levels of strength that could do anything, do everything: canoeing or running a country, or throwing a baseball. Just one of those," recalled Trudeau.

"And … (there) was the counterpoint of watching my mom, who really had struggles, (who) was fighting depression and various things. But I got to see the resilience and the strength that comes through not always being externally super, and all put together, and everything, but being vulnerable and being open and demonstrating a real core resilience and strength.”

Margaret Trudeau has since become a prominent advocate for mental health issues.

My mother is an inspiration. Her bravery in discussing mental health struggles has opened the door for others. RT to support #BellLetsTalk.

Trudeau also talked about his own young family, and how he's doing "as much as possible" to spend time with them.

The prime minister and his wife, Sophie Gregoire-Trudeau, have three children: Xavier James, Ella-Grace and Hadrian. Gregoire-Trudeau, a former TV reporter, has been a stay-at-home mother for the past several years.

Trudeau said that surprisingly, since the October federal election, he has spent less time travelling and had more time for his family.

"The past three years it has been a lot on the road getting out to try and learn from Canadians, hear from Canadians and build the platform that was going to respond to what people wanted," said Trudeau.

And Trudeau says those precious moments have kept him motivated.

"That family time keeps me centered and grounded, because I'm not doing this job in spite of the fact that I have kids, I'm doing it because I have kids and want to give them a better world," he said.