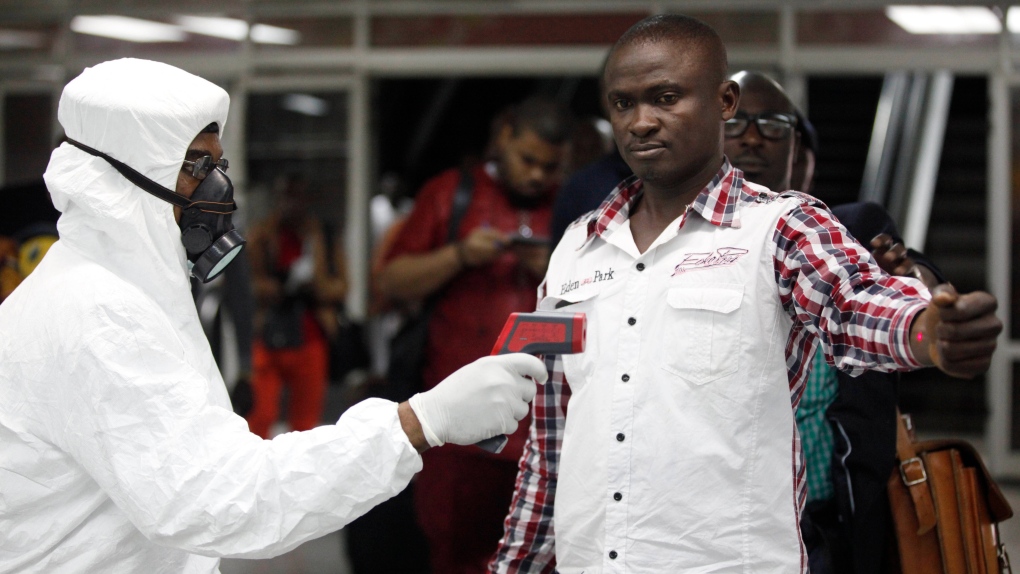 In this Aug. 6, 2014 photo, a Nigerian port health official uses a thermometer on a worker at the arrivals hall of Murtala Muhammed International Airport in Lagos, Nigeria. (AP / Sunday Alamba)

ABUJA, Nigeria -- Nigeria's president has declared the containment of the Ebola virus in Africa's most populous nation a national emergency, his office said in a statement Friday, after the health ministry announced two more confirmed cases.

The relevant agencies must ensure that all possible steps are taken "to effectively contain the threat of the Ebola virus in line with international protocols and best practices," President Goodluck Jonathan said in the statement released by his office.

Nigeria's Health Minister Onyebuchi Chukwu said today the total confirmed cases have risen to 9, including a nurse and the Liberian-American man who died in Lagos. All the confirmed cases had primary contact with Patrick Sawyer, mostly at the hospital before he died, the ministry said. Sawyer flew into Lagos last month, collapsed at the airport and died of the disease at a hospital in Lagos five days later.

Jonathan also approved the release of 1.9 billion naira ($11.7 million) to contain the disease through an intervention plan. The plan includes establishing additional isolation centres, screening at borders and deploying more personnel, his spokesman said. He also asked schools to consider extending the current school holiday until there is a national reassessment of the level of threat Ebola poses in Nigeria.

The president asked the public "to desist from spreading false information about Ebola which can lead to mass hysteria, panic and misdirection, including unverified suggestions about the prevention, treatment, cure and spread of the virus," the president's spokesman Reuben Abati said.

Health Minister Chukwu said Friday the rumours that are circulating about prevention and treatment of Ebola are counterproductive, and that some people may be taking advantage of the situation to profit from it. He said such rumours include drinking or bathing in salt water, waking up around dawn as well as using specials soaps. Measures will be enacted to block text messages touting these claims if they continue, he said.

He said 139 people are now under surveillance after being in contact with currently infected people. Most of them are co-operating, but there are a few cases where people are not, he said.

"Some people, against our advice have even left Lagos, primary contacts, to go to other cities," he said.

The president directed the federal ministry of health to collaborate with state health ministries, the National Center for Disease Control, and the National Emergency Management Agency.