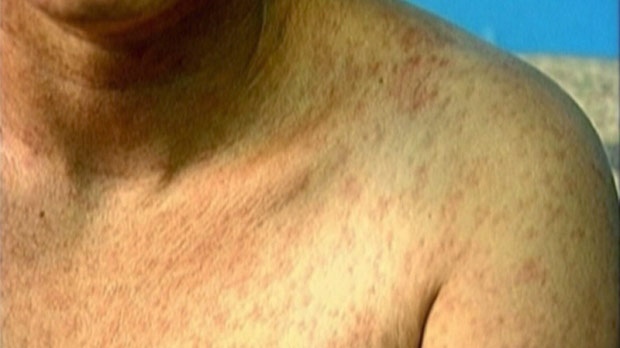 A measles rash is shown on a man's shoulder in this file image.

More than 41,000 children and adults across Europe were infected with measles in the first six months of 2018, the World Health Organization says -- a stunning, record-breaking increase over previous years.

This year, at least 37 people have died from measles, a disease that can lead to pneumonia and encephalitis, which can cause blindness, brain damage or death, particularly in children.

“We call on all countries to immediately implement broad, context-appropriate measures to stop further spread of this disease. Good health for all starts with immunization, and as long as this disease is not eliminated, we are failing to live up to our Sustainable Development Goal commitments,” she said in a statement.

Ukraine has seen more than 23,000 people affected – more than half the regional total. Serbia, meanwhile, has reported the highest number of deaths, with 14.

Measles is one of the most contagious illnesses in the world, and spreads easily through tiny, contaminated saliva droplets from coughs and sneezes that hang in the air.

The best way to prevent outbreaks is to ensure that at least 95 per cent of the population is immunized with two doses of the measles vaccine. High rates of vaccination allow for "herd immunity" that can protect vulnerable people such as infants who are too young to be vaccinated and those who can't be vaccinated because of medical reasons.

But vaccine skepticism remains high in many parts of Europe. A 2016 global survey of vaccine confidence led by researchers at the London School of Hygiene and Tropical Medicine found Europe to be the region that was least confident in vaccine safety.

In Italy, for example, a loud anti-vaccination movement has been bolstered by populist, anti-establishment politicians, reported the Associated Press. In Romania, superstitions abound, such as using cabbage juice to ward off the disease, while celebrities such as TV star Olivia Steer have publicly promoted anti-vaccine stances.

While immunization rates increased among eligible children in Europe in 2016, there are still some communities that report below 70 per cent coverage.

WHO says it is working closely with those countries currently facing outbreaks to implement enhanced immunization as well as heightened surveillance to quickly detect cases.

“We can stop this deadly disease,” said Jakab. “But we will not succeed unless everyone plays their part: to immunize their children, themselves, their patients, their populations – and also to remind others that vaccination saves lives.”