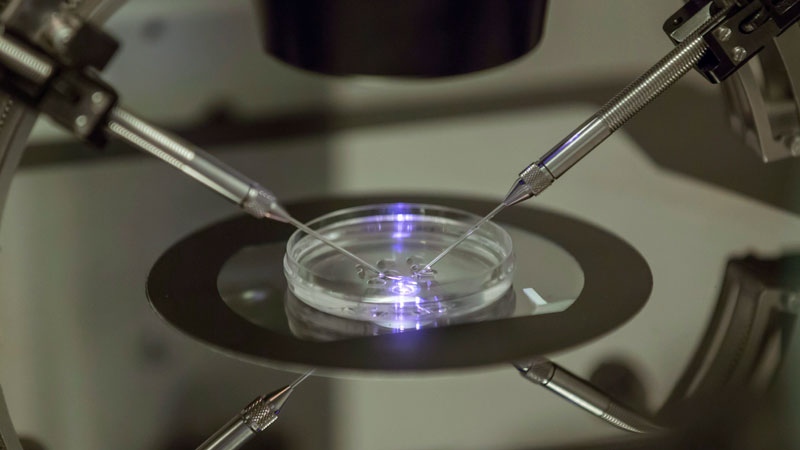 Those complications include post-partum bleeding that may require a blood transfusion, admission to an intensive care unit, infection of the reproductive system, and -- in extremely rare cases -- death.

In a study published Monday in the Canadian Medical Association Journal, a team of researchers compared the rate of severe complications in women who became pregnant with a reproductive technology versus those who did not need help to conceive.

"We found that 30.8 per 1,000 of the women in our study who received an infertility treatment experienced a severe pregnancy complication," said lead researcher Dr. Natalie Dayan, director of obstetric medicine at McGill University Health Centre.

"When compared with a group of women of approximately the same age and with similar characteristics who gave birth without the use of infertility treatment, 22.2 per 1,000 experienced a severe pregnancy complication.

"But it's important to remember that the absolute number of women who develop these complications remains quite small," she added.

"For the vast majority of women or couples who cannot conceive naturally, this treatment is a very safe and effective method of becoming pregnant and having a child."

In Canada, one in six couples is affected by infertility. Many turn to assisted reproductive technology, resulting in about 18,000 births each year. The rate of severe complications is approximately 10 to 15 for every 1,000 births. Maternal deaths are even rarer, occurring in 10 or fewer births per 100,000.

To conduct the study, researchers looked at data from 813,719 births in Ontario hospitals between 2006 and 2012. They identified 11,546 women who conceived through an infertility treatment and matched them with 47,553 women with similar characteristics who became pregnant naturally.

Interestingly, the study found that while IVF patients had a higher risk of pregnancy complications, that wasn't the case for women who had less invasive fertility treatments, such as intrauterine insemination or ovulation induction with medication.

Dayan said further research is needed to determine if there are factors about the women themselves, or the IVF procedure specifically, that raise the risk of pregnancy-related adverse effects.

Underlying medical conditions like diabetes and being overweight could increase the risk for women, while the use of often high-dose hormones to stimulate ovulation for egg retrieval or implanting fresh versus frozen embryos could also be factors, she speculated.

"It might vary woman to woman, and I suspect that in some ways that it really does, the way a woman reacts to the treatment."

Fertility specialist Dr. Caitlin Dunne, co-director of the Pacific Centre for Reproductive Medicine, commended the authors for their large-scale study on an important issue.

But Dunne, who was not involved in the research, cautioned that results have to be interpreted with care and that the risk of a severe complication for an individual woman should not be overstated.

"If I'm sitting across from my patient, I'm going to tell her that even when you look at a study like this, there is a less than one per cent absolute increased risk to you of having a serious event after your delivery.

"Do I think it's going to deter the woman sitting across from me in my office from pursuing fertility treatment to achieve her dream of being a mother? Absolutely not."

That's why it's important for health providers to discuss with couples the potential risks associated with assisted reproduction and to try to minimize those risks with a plan tailored to the individual woman, she said.

Dayan agreed, saying the study findings suggest that women who conceive through IVF might benefit from having more monitoring during pregnancy and referral to a high-risk pregnancy specialist.

"IVF and fertility treatments in general help countless couples with infertility problems, and the field has advanced considerably," Dayan said.

"Future studies will be able to further customize treatment for women so we could minimize risk and maximize success."