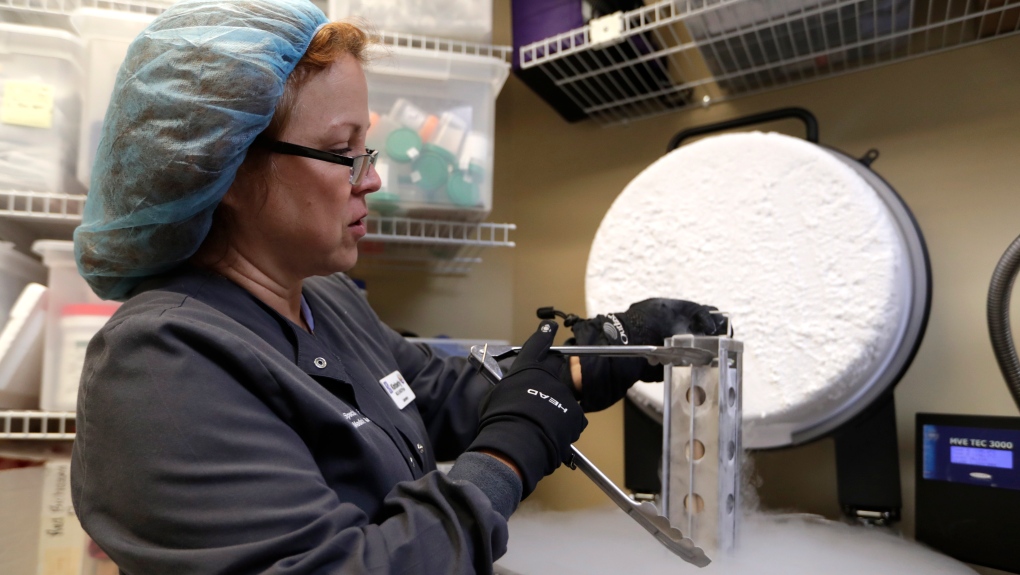 In this Tuesday, Oct. 2, 2018 photo, Kimberly Malm removes a container with frozen embryos and sperm being stored in liquid nitrogen at a fertility clinic in Fort Myers, Fla. (AP Photo/Lynne Sladky)

FORT MYERS, Fla. -- Tens of thousands of embryos are stuck in limbo in fertility clinics, leftovers from pregnancy attempts and broken dreams of parenthood.

Some are outright abandoned by people who quit paying storage fees and can't be found. In other cases, couples are struggling with tough decisions.

Jenny Sammis can't bring herself to donate nearly a dozen of her extras to research. She and her husband agreed to do that when they made their embryos 15 years ago, but her feelings changed after using some of them to have children.

"I have these two gorgeous, smart people who came from this process," Sammis said. "These embryos are all like seeds that could become potential people. That reality to me was all abstract when they were in the freezer."

Tank failures at two clinics in Ohio and California last year revealed hidden issues with long-frozen embryos, including some from the 1980s when IVF began. A few years ago, medical groups developed sample consent forms clinics could use for new patients, spelling out what could happen to unused embryos. But that hasn't resolved what to do with ones made long ago.

"It's a real dilemma for these clinics," said Rich Vaughn, a Los Angeles lawyer who headed the American Bar Association's assisted reproduction committee for many years. "We don't quite know what to do with them and everyone's afraid to act" for fear they'll be sued if people surface decades later and want their embryos.

The number is growing as more couples try IVF and because of changes in how it's done. The old way was to mix eggs and sperm in the lab and transfer multiple fresh embryos to a womb, hoping at least one would lead to pregnancy. Now, couples usually freeze many embryos, test for health problems and transfer the most viable one at a time to avoid multiple births. That often means leftovers once the desired family is complete.

How many embryos are in storage isn't known -- centres don't have to report that. One study estimated there were 1.4 million in the U.S. Researchers think 5 to 7 per cent are abandoned, though it's as high as 18 per cent at some clinics. Some define that as a year of no contact or storage payments after reasonable efforts to find the owners; others draw the line at five years. Some clinics search social media and hire investigators to find owners when abandonment is suspected.

"It has vexed our field" from the start, said Dr. Mark Sauer, a fertility specialist at Rutgers Robert Wood Johnson Medical School who is on the ethics committee of the American Society of Reproductive Medicine.

It also has vexed couples, many of whom never expected so many leftovers. Sara Raber of New York's Long Island had five extras after conceiving two children.

"Your goal in the beginning is just to get pregnant," so making a lot of embryos seems necessary because you don't know how many tries it will take, she said. But disposing of extras brings a finality to family building that's different for IVF couples than it is for those who conceived naturally.

"You're making a conscious decision not to have a baby anymore," said her husband, Howard Raber. "That's what makes it hard."

Even after the Rabers agreed to donate theirs to research, which usually means to a fertility clinic to let staff practice IVF, the paperwork sat on her desk for months, Sarah Raber said.

In Arlington, Virginia, Sammis is having a similar struggle. "I get to the point of signing the papers and I just can't deal with it," she said.

Sammis said a friend who couldn't decide what to do with her embryos moved away and "didn't give the fertility centre her forwarding address ... That was her way of dealing with it."

When couples have abandoned embryos, "it was largely because they did not want to be responsible for making a very difficult decision. They would rather let the program do it," Sauer said.

Andrea Braverman, a health psychologist at Thomas Jefferson University in Philadelphia, said it's not an easy choice. A study of 131 couples in Canada found that one third had not returned for frozen embryos after five years. Another study found that up to 70 per cent of couples delayed a decision for at least five years and many changed their minds about what they thought they'd do after they had IVF.

"This is a fluid decision. It is not a one-and-done," Braverman said.

Dr. Craig Sweet, who runs a fertility clinic in Fort Myers, Florida, knows the problem well. About 18 per cent, or 300, of his clinic's frozen embryos are abandoned, some for 25 years. A study he did found that couples were more likely to abandon embryos if they had stored them a long time, had a low education level, already had many children or owed the clinic money.

One of his patients with more than a dozen leftover embryos forged her husband's signature on forms giving permission to use them because she wanted more children and he did not. The plan fell apart when the clinic insisted on seeing him personally.

The courts view an embryo as something between person and property, said Susan Crockin, a reproductive law expert at Georgetown University. When it's in the lab as opposed to being in a womb, "people have equal rights to it" and most courts will not allow one member of a couple to use an embryo over the other's objection, she said.

The actress Sofia Vergara and her ex-fiance Nick Loeb fought over frozen embryos they made, but a court said Vergara could not be forced to procreate against her wish and denied Loeb use of the embryos after the couple split.

States may try to rewrite legal precedents. Last April, Arizona's governor signed legislation allowing one member of a divorced couple to use embryos created during a marriage even if the ex-spouse doesn't want a child.

Clinics try to avoid being in the middle.

"What we tell couples is that if you're divorced, nobody gets to transfer the embryos until we get something from a court" that says who has control of them, said Dr. Richard T. Scott Jr., scientific director of Reproductive Medicine Associates, one of the nation's largest clinics with centres in New Jersey, Pennsylvania and Florida.

In 2005, Sweet began requiring patients to agree not to destroy unused embryos. He also started Embryo Donation International to provide embryos to couples willing to use them to have children. He accepts embryos from 62 facilities in North America and has more than 400 available; 50 to 60 were used in 2017, he said.

"It just didn't make sense to us that people were discarding perfectly normal, useful embryos," he said.

His IVF co-ordinator, Rebecca Ruano, had 18 leftover embryos after the birth of her twins, and agreed to donate the extras to people unable to have children. "I was not willing to destroy or donate them to science. We worked too hard for them," she said.

Frozen embryos remain viable for decades as far as anyone knows. Last year, the National Embryo Donation Center in Tennessee reported a birth using an embryo that had been frozen for 24 years.

Sweet supplied a Chicago woman an embryo that had been frozen for 17 years and made one request:

"When the baby is born," he said, "I want you to see if you can register the kid to vote."