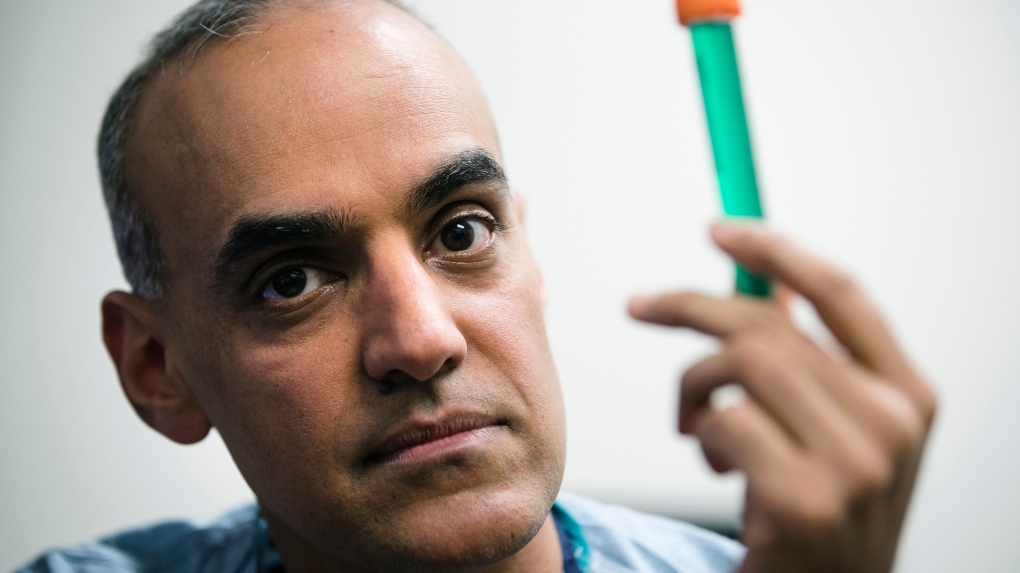 Surgeon Dr. Sunil Singhal poses for a photograph with a vial of fluorescent dye at the Hospital of the University of Pennsylvania in Philadelphia, Tuesday, Jan. 23, 2018. (AP Photo/Matt Rourke)

PHILADELPHIA -- It was an ordinary surgery to remove a tumour -- until doctors turned off the lights and the patient's chest started to glow. A spot over his heart shined purplish pink. Another shimmered in a lung.

They were hidden cancers revealed by fluorescent dye, an advance that soon may transform how hundreds of thousands of operations are done each year.

Surgery has long been the best way to cure cancer. If the disease recurs, it's usually because stray tumour cells were left behind or others lurked undetected. Yet there's no good way for surgeons to tell what is cancer and what is not. They look and feel for defects, but good and bad tissue often seem the same.

Now, dyes are being tested to make cancer cells light up so doctors can cut them out and give patients a better shot at survival.

With dyes, "it's almost like we have bionic vision," said Dr. Sunil Singhal at the University of Pennsylvania. "We can be sure we're not taking too much or too little."

The dyes are experimental but advancing quickly. Two are in late-stage studies aimed at winning Food and Drug Administration approval. Johnson & Johnson just invested $40 million in one, and federal grants support some of the work.

"We think this is so important. Patients' lives will be improved by this," said Paula Jacobs, an imaging expert at the National Cancer Institute. In five or so years, "there will be a palette of these," she predicts.

Singhal was inspired a decade ago, while pondering a student who died when her lung cancer recurred soon after he thought he had removed it all. He was lying next to his baby, gazing at fluorescent decals.

"I looked up and saw all these stars on the ceiling and I thought, how cool if we could make cells light up" so people wouldn't die from unseen tumors, he said.

A dye called ICG had long been used for various medical purposes. Singhal found that when big doses were given by IV a day before surgery, it collected in cancer cells and glowed when exposed to near infrared light. He dubbed it TumorGlow and has been testing it for lung, brain and other tumour types.

He used it on Ryan Ciccozzi, a 45-year-old highway worker and father of four from Deptford, New Jersey, and found hidden cancer near Ciccozzi's heart and in a lung.

"The tumour was kind of growing into everything in there," Ciccozzi said. "Without the dye, I don't think they would have seen anything" besides the baseball-sized mass visible on CT scans ahead of time.

Singhal also is testing a dye for On Target Laboratories, based in the Purdue research park in Indiana, that binds to a protein more common in cancer cells. A late-stage study is underway for ovarian cancer and a mid-stage one for lung cancer.

In one study, the dye highlighted 56 of 59 lung cancers seen on scans before surgery, plus nine more that weren't visible ahead of time.

Each year, about 80,000 Americans have surgery for suspicious lung spots. If a dye can show that cancer is confined to a small node, surgeons can remove a wedge instead of a whole lobe and preserve more breathing capacity, said On Target chief Marty Low. No price has been set, but dyes are cheap to make and the cost should fit within rates hospitals negotiate with insurers for these operations, he said.

Dyes may hold the most promise for breast cancer, said the American Cancer Society's Dr. Len Lichtenfeld. Up to one third of women who have a lump removed need a second operation because margins weren't clear -- an edge of the removed tissue later was found to harbour cancer.

"If we drop that down into single digits, the impact is huge," said Kelly Londy, who heads Lumicell, a suburban Boston company testing a dye paired with a device to scan the lump cavity for stray cancer cells.

A device called MarginProbe is sold now, but it uses different technology to examine the surface of tissue that's been taken out, so it can't pinpoint in the breast where residual disease lurks, said Dr. Barbara Smith, a breast surgeon at Massachusetts General Hospital.

She leads a late-stage study of Lumicell's system in 400 breast cancer patients. In an earlier study of 60 women, it revealed all of the cancers, verified by tissue tests later.

But it also gave false alarms in more than a quarter of cases -- "there were some areas where normal tissue lit up a little bit," Smith said.

Still, she said, "you would rather take a little extra tissue with the first surgery rather than missing something and have to go back."

Blaze Bioscience is testing Tumor Paint, patented by company co-founder Dr. Jim Olson of Fred Hutchinson Cancer Research Center and Seattle Children's Hospital. It's a combo product -- a molecule that binds to cancer and a dye to make it glow.

"You can see it down to a few dozen cells or a few hundred cells," Olson said. "I've seen neurosurgeons come out of the operating room with a big smile on their face because they can see the cancer very clearly."

Early-stage studies have been done for skin, brain and breast cancers in adults, and brain tumors in children.

Avelas Biosciences of San Diego has a similar approach -- a dye attached to a molecule to carry it into tumour cells. The company is finishing early studies in breast cancer and plans more for colon, head and neck, ovarian and other types.

Cancer drugs have had a lot of attention while ways to improve surgery have had far less, said company president Carmine Stengone.

"This was just an overlooked area, despite the high medical need."