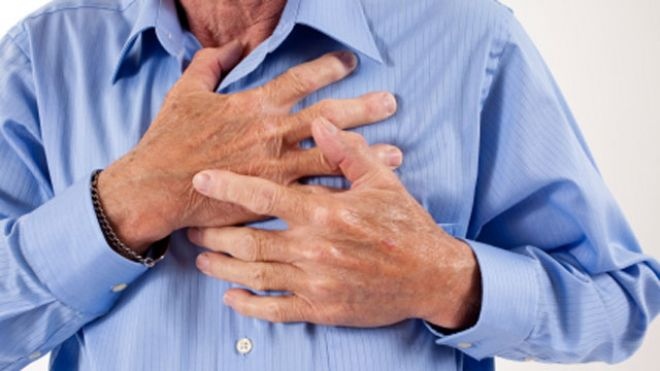 Broken heart syndrome can cause chest pain intense enough to send a patient to hospital.

TORONTO -- There can be a downside to living on the upper floors of highrise apartments and condominiums for residents who suffer a cardiac arrest and need emergency treatment, a study suggests.

Residents on higher floors who have a cardiac arrest have a far lower survival rate than those on lower floors, the study found, likely in part because it takes longer for paramedics to reach them and begin resuscitation efforts.

A cardiac arrest occurs when the heart suddenly stops beating. It is different than a heart attack, which is typically caused by a blockage in a coronary artery.

Paramedic Ian Drennan, who led the St. Michael's Hospital study, said time is critical for treating a cardiac arrest with CPR and often a defibrillator to shock the heart back into a normal rhythm.

"The biggest factor is the time that people can initiate treatment for cardiac arrest," said Drennan of York Region Paramedic Services, who is also a first responder with Rescu, a group based at the Toronto hospital.

Researchers found that having a cardiac arrest above the second floor of a highrise added an extra two minutes to response time for paramedics.

That may not sound like much, but for each minute of delay, there's a seven to 10 per cent drop in the odds the patient will live.

"Building access issues, elevator delays and extended distance from the emergency vehicle to the patient can all contribute to longer times for 911-initiated first responders to reach the patient and start time-sensitive, potentially life-saving resuscitation," he said.

The study, published Monday in the Canadian Medical Association Journal, examined survival rates for more than 8,200 cardiac arrests that occurred in private residences in Toronto and nearby Peel Region between 2007 and 2012. Private residences included houses, apartments, condos and townhouses.

Of almost 6,000 cardiac arrest patients living below the third floor, 252 were successfully resuscitated and discharged from hospital.

The average age of patients was 71 and 60 per cent of them were male.

"Patients who survived tended to be younger, their cardiac arrest was more often witnessed by bystanders, and bystanders were more likely to perform CPR," said Drennan. Even so, the rate of bystander use of an automated external defibrillator (AED) during the study period was low.

"They also had shorter times for 911-initiated first responders to get to the scene and to the patient," he said.

"Often in most highrises, there can be a delay to get into the building, depending who's at the front door; there may be nobody. The other big delay is often the elevator.

"Sometimes you'll walk in and the elevator's up on the 16th floor already or it's bringing people down and it's stopping on every other floor ... Our only option as paramedics is to press the up button like everybody else and wait until it makes its way to the ground floor."

Those sorts of delays could be avoided if highrise residential buildings had a plan in place that could alert staff that 911 responders are on their way and to be prepared.

"Then maybe they can make sure the door is open and the elevator is waiting."

Dr. Christian Vaillancourt, an emergency medicine physician at the Ottawa Hospital who was not involved in the study, said although the findings may seem intuitive, it's "nice to see someone putting this on paper."

And while a lot of attention has been paid to equipping public venues like airports and sports arenas with AEDs, about 85 per cent of the estimated 40,000 cardiac arrests suffered by Canadians each year occur within the home, he said.

"We have yet to really address people arresting in their own homes and that's the majority of people," Vaillancourt said Monday from Ottawa. "And the interventions there have less to do with what the paramedics can do and more with training the community at large with knowing and being willing to perform CPR.

"And access to a defibrillator in private locations has always been a challenge."

Survival rates among cardiac arrest patients can be increased when a bystander employs CPR and has access to an AED, as well as training in their use, he said, adding that many people are reticent to use the shock machines, fearing they will do the collapsed person more harm than good.

Vaillancourt, who has co-authored studies on bystander CPR and AED use, agreed with Drennan's suggestion that residential highrises could make the life-saving devices available on certain floors or inside elevators.

"Certainly to have AEDs in the corridors with fire extinguishers and fire hoses would be a great location," he said.

"So you can put the machines there. The next challenge is to convince people to use them."