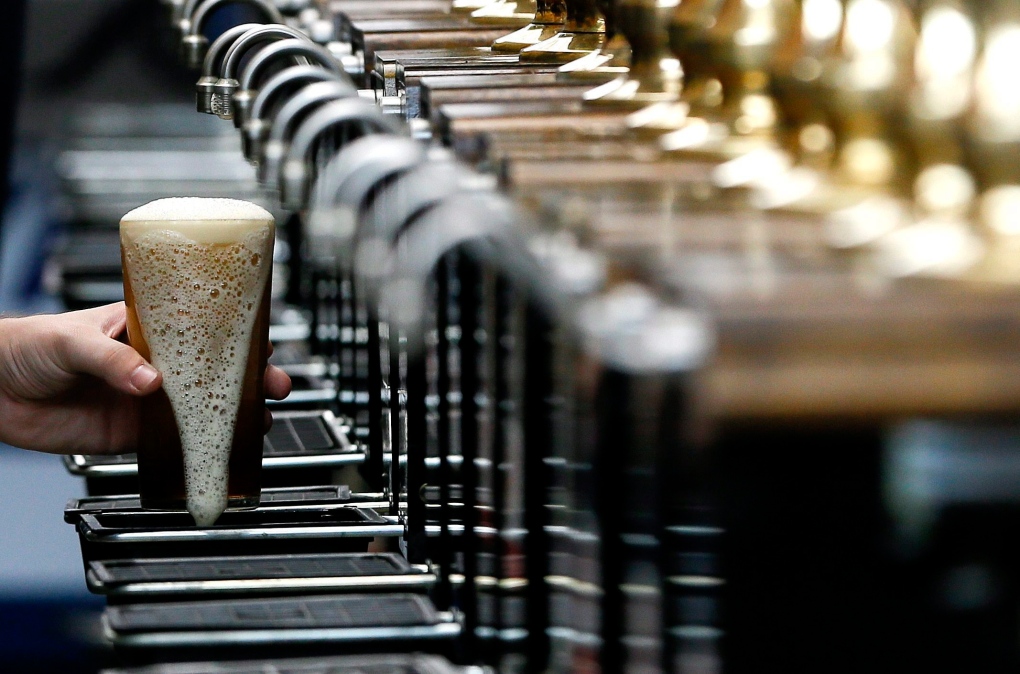 A pint of beer is poured at the Great British Beer Festival, at Olympia in London on Aug. 11, 2015. (Kirsty Wigglesworth / AP Photo)

LONDON -- British health officials say drinking any alcohol regularly increases the risk of cancer, and have issued tough new guidelines that could be hard to swallow in a nation where having a pint is a hallowed tradition.

In recommendations released Friday, Britain's Chief Medical Officer advised both men and women not to drink any more than 14 units of alcohol -- about six pints of beer or about four large glasses of wine -- a week and said even that still carries a low risk of liver disease or cancer.

Alcohol is a known carcinogen; in the U.S., experts estimate it causes about 3.5 per cent of all cancer deaths. People who have more than about four drinks a day have up to a three-fold greater risk of cancers of the head and neck than non-drinkers.

Here are some questions and answers about the new guidelines and their likely effect:

For women, the guidelines remain unchanged, recommending no more than 14 units of alcohol a week.

Men, however, had previously been told they could drink up to 21 units a week. That now drops to the same limit as for women. The original guidance was published in 1995, before much of the recent evidence about the link between alcohol and cancer was released.

The guidance clarifies advice to pregnant women, recommending they avoid alcohol "as a precaution." The recommendations say "the risk of harm to the baby is likely to be low if a woman has drunk only small amounts of alcohol before she knew she was pregnant or during pregnancy."

In the U.S., the Centers for Disease Control and Prevention says there is no known safe amount of alcohol use during pregnancy or while trying to get pregnant.

Probably not. In a nation known for its ales and its pubs, Britons are unlikely to abandon drinking in droves. Lax control of retail sales and cheap alcohol have fueled a rise in binge-drinking, which was once declared a national scandal by Prime Minister David Cameron. Even the new guidance acknowledges people are unlikely to give up drinking and advises them not to regularly drink more than 14 units a week rather than calling for abstinence.

To help Britons avoid binge drinking, the government recommends people spread their drinking over at least three days a week. It warns that the risk of cancers of the mouth, throat and breast increases with any amount drunk on a regular basis.

"This is not a crackdown on alcohol," said Dr. Niamh Fitzgerald, a lecturer in alcohol studies at the University of Stirling, who was not involved in drafting the government guidelines. "It is about supporting people to make up their own minds." In a statement, she said the new advice reflects the scientific consensus on the risks from drinking.

HOW DOES THIS COMPARE WITH OTHER COUNTRIES?

Each country measures alcohol consumption slightly differently. The new guidelines are stricter than some other countries in Europe including Ireland and Spain, but roughly similar to what's recommended in the U.S. According to American dietary guidelines, women should drink no more than one drink a day and men should have no more than two.

WHAT ABOUT THOSE SUPPOSED BENEFITS OF ALCOHOL?

While some studies have suggested drinking moderate levels of red wine is good for the heart, British officials say that only applies to women over age 55, in whom the greatest benefit is seen when women drink no more than about two glasses a week. "The group concluded that there is no justification for drinking for health reasons," the government said.

WHAT'S THE VIEW DOWN AT THE PUB?

"This won't change a thing," said David Evans, an engineer enjoying a pint at a north London pub. He said he regularly exceeds the new limitation of about six pints of beer a week in a single day and has no intention of changing his drinking habits. "A lot of people will let their own body tell them what's right and what's wrong," he said.

U.K. Independence Party leader Nigel Farage said the advice was "over the top" and called for a mass protest against such "nannying."

"We all know there is a big problem with excessive alcohol consumption in this country," he told LBC radio. "But frankly, if we choose to enjoy a few drinks four or five nights a week after a hard day at work, whether it slightly shortens our lives or not, so what?"