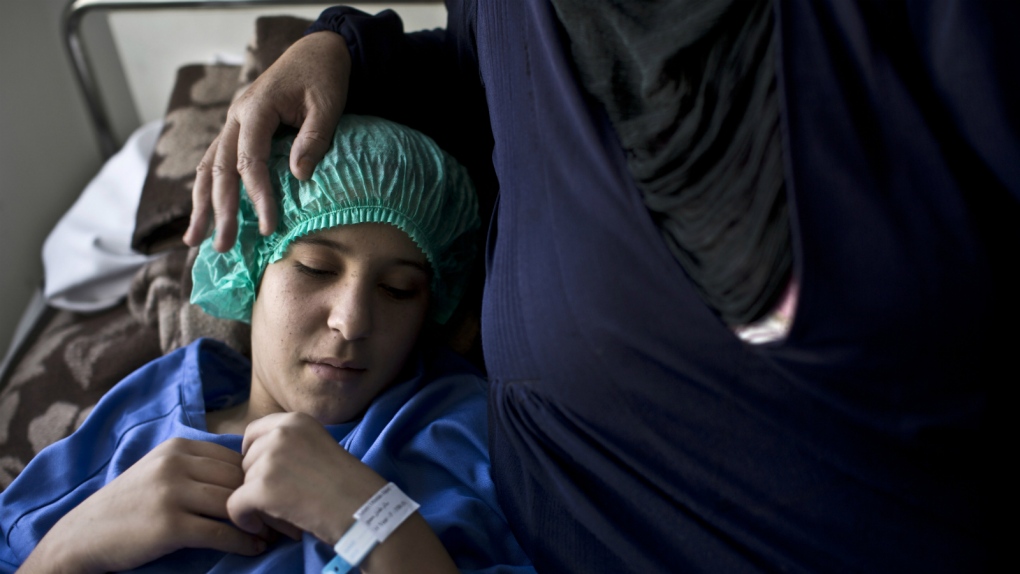 Syrian girl Salam Rashid, 14, who lost both of her legs below the knees, is comforted by her mother shortly before a surgery to reshape her stumps for prostheses at MSF Hospital for Specialized Reconstructive Surgery, run by the international charity Medecins Sans Frontieres (Doctors Without Borders) in Amman, Jordan on Aug. 17, 2015. (AP / Muhammed Muheisen)

TORONTO -- When Syrian refugees begin arriving in Canada in the coming weeks, one of the top priorities will be getting them basic health care -- something most migrants will have gone without while living in makeshift camps far from home, sometimes for years.

"I think this group -- and I think it's true of all refugees, but perhaps more so for the Syrians -- what they need is really good primary care," said Dr. Meb Rashid, medical director of the Crossroads clinic at Women's College Hospital in Toronto, which specializes in immigrant health.

Crossroads is one of several clinics that will provide health services to Syrian refugees who come to Toronto, which could take in thousands of migrants over the next few months.

Refugees will undergo medical testing before they are allowed on a plane bound for Canada, with screening for such communicable diseases as tuberculosis, although Rashid said reports from Europe suggest TB rates among Syrian migrants are relatively low.

Doctors also don't foresee more common transmissible diseases to be a major concern among refugees when they arrive in Canada, although there may be cases of infectious diarrhea and leishmaniasis, a parasitic infection that affects the skin.

"But certainly we're not expecting the type of infectious diseases we see in many other refugee migrations," he said, noting that with those arriving from Southeast Asia or sub-Saharan Africa, "we have to worry about a lot of tropical diseases, like malaria."

Dr. Tobey Audcent, a pediatrician at the Children's Hospital of Eastern Ontario who provides services to refugees at Ottawa's Centretown Community Health Centre, said some refugee children may have such ailments as asthma or a respiratory infection.

The main priority will be making sure kids -- as well as adults -- are up to date on vaccinations for a host of infectious diseases, among them polio, measles and tetanus.

"Those things are hugely important and a big part of the planning," Audcent said of immunizations.

While some refugees may have incomplete immunization records, or no record at all, studies have shown there is no danger in revaccinating, said Dr. Kevin Pottie of the University of Ottawa, co-chair of the Canadian Collaboration for Immigrant and Refugee Health.

"A lot of clinicians used to think that they had to do (blood tests), wait three to four weeks or longer to get the results, and if they weren't immune they would vaccinate," he said. "We've been doing work to find out that there is no major harms from vaccinating someone who may have had vaccination but their records are incomplete or lost.

"We believe vaccination is a key part to giving them a healthy future and we will be vaccinating quite quickly and without fear of giving an extra vaccine to somebody."

Adults need to be checked for such chronic conditions as diabetes, cardiovascular disease and high blood pressure -- which may have gone undiagnosed and untreated in the years after refugees fled their war-torn homeland and settled in camps in Turkey, Lebanon and Jordan, doctors say.

"We would imagine that not only the children but the adults in the camps over the last four years probably haven't had a lot of access to primary care," said Rashid. "These can be simple things like women never having a Pap test or not having a Pap test for five or six years."

Looking after mental health issues, such as post-traumatic stress disorder resulting from the harrowing experiences many Syrian families have gone through, is also part of the care Canadian clinicians are gearing up to provide their newest patients.

"We will have psychiatrists backing up our clinic, but the vast majority of them will be taken care of in the context of primary care," said Rashid.

He believes a critical part of treatment for people with trauma-related symptoms is having their post-migration settlement go well.

"I think we have a tendency to look at refugees as people who've endured horrific things but as soon as they arrive we need to hold them and do the Oprah thing," he said. "And I find more often than not, that's not the case.

"People are very resilient -- and they have to be to survive that journey.

"I'm confident that if the migration piece goes well -- the housing, getting the kids in school, the English language training, the employment opportunities, recognizing their skills -- if that goes well, it really does help significantly with the rates of mental health issues."