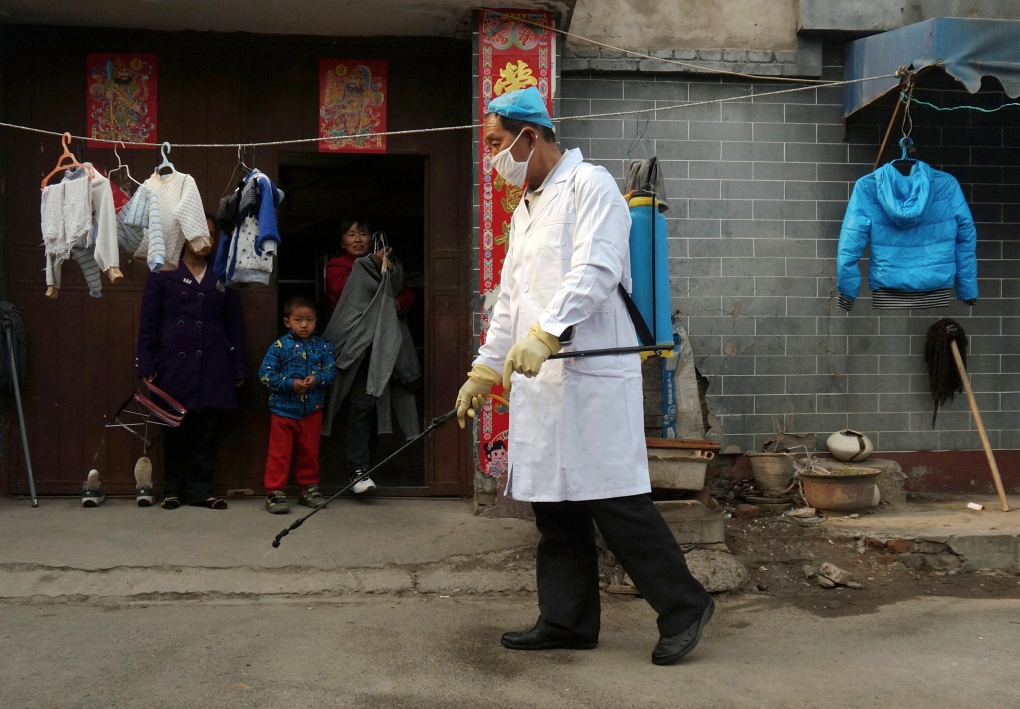 A family watches a worker spray disinfectant in Naidong village, where a boy tested positive for the H7N9 virus, in Beijing Monday, April 15, 2013. (AP)

TORONTO -- The number of H7N9 bird flu infections continues to climb rapidly in China. But the Public Health Agency of Canada says it believes the risk the virus poses to Canadians remains low.

The agency's director general for immunization and respiratory infectious diseases said Canada is monitoring the situation in China, and continues work on an update of the national pandemic preparedness plan that was begun in the aftermath of the 2009 H1N1 pandemic.

"We're very interested and watching very carefully what is going on in China," Dr. John Spika said Monday in an interview.

"But the bottom line is that until the virus demonstrates some ability to more efficiently spread from person to person it remains something that we're very interested in, watching carefully but still consider to be a low risk."

Since the new H7N9 virus emerged last spring, there have been about 277 cases diagnosed; 63 of the infections have been fatal. After several months with no infections over the summer, new cases began to pop up in the fall as temperatures went down and conditions for the spread of influenza viruses improved. Since then, there have been 142 new cases, and 18 deaths, according to the U.S. Centers for Disease Control.

Spika said the recent diagnosis of a case of H5N1 bird flu in Alberta is a reminder that hospitals and public health officials across the country should be on the lookout for infections with novel flu viruses in people with a travel history to China.

The woman, who died from her illness, is believed to have contracted the virus while visiting China.

"It's quite possible that the same thing may occur with H7(N9)," Spika said, referring to the possibility that infected travellers may bring the virus to Canada. But he said the fact that surveillance efforts picked up the H5N1 infection leads the Public Health Agency to believe H7N9 cases would likewise be detected.

Spika said a lot of work has been done on the national pandemic plan since 2009. In particular, an effort has been made to make the document more flexible so that authorities can react with greater ease to the particulars of the next pandemic.

Prior to 2009, many pandemic plans -- both here and abroad -- were written in such a way that reaching a particular phase on the World Health Organization's pandemic alert scale activated certain response activities. For example, vaccine production contracts kicked in when the WHO declared a pandemic was underway. The resulting outbreak turned out to be milder than planners had been anticipating and some countries ended up with vaccine they didn't want or need.

Spika said the revised plan will be more like a guidebook than a cookbook. He said it is hoped the provinces and territories will approve the revised plan in the spring or early summer. Work remains to be done on annexes to the main document, including those relating to surveillance, laboratory efforts, vaccines and antivirals.

On the latter issue, Spika said provinces and territories appear to be maintaining their stockpiles of flu antiviral drugs. The national antiviral stockpile contains enough of the drugs to treat about 17 per cent of the population, he said.

Canada has not asked its pandemic vaccine suppliers to make and test H7N9 vaccine, opting instead to wait for the results of clinical trials being done in the United States.

The U.S. Biomedical Advanced Research and Development Authority -- BARDA -- has funded trials to test how much vaccine each person would need to gain protection against H7N9, and whether a boosting compound called an adjuvant would be needed to stretch supplies during a pandemic.

Past studies of H7 flu viruses have shown they are poorly immunogenic; without an adjuvant, even large doses produced poor results.

The U.S.-funded studies of H7N9 vaccine have confirmed that two doses per person would be needed to get a protective response, and that an adjuvant would be needed.

The U.S. has decided to stockpile H7N9 vaccine, though it will not reveal how many doses it plans to have on hand. Spika said to this point there has been no decision taken on whether Canada should add H7N9 vaccine to a national stockpile which already includes some H5N1 vaccine.