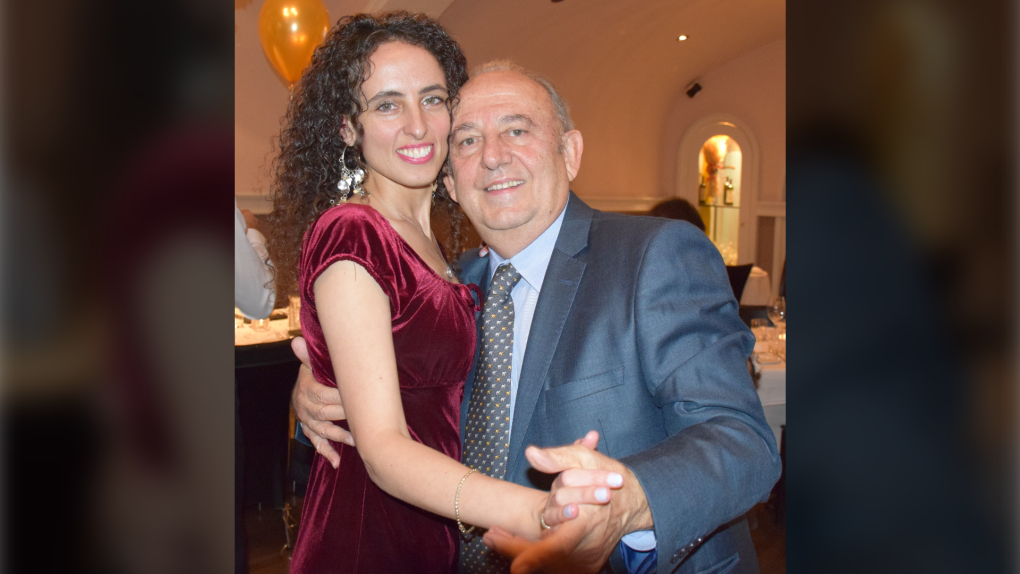 Iris Kulbatski poses for a photo with her father Henry Kulbatski at her parents' 50th wedding anniversary in 2016. (Supplied by Iris Kulbatski)

A Toronto woman who says a hospital charged her more than $1,100 to access her deceased father’s medical records is petitioning the Ontario government to enforce fee regulations and increase transparency in the health-care system.

With support from her local MPP and the information and privacy commissioner of Ontario (IPC), Iris Kulbatski created a petition addressed to the Legislative Assembly of Ontario calling on the government to legislate a proposal that was put forth by the Ontario Ministry of Health in 2006.

In the proposal, the ministry recommended enforcing regulations that would prevent hospitals and other information custodians, such as private companies that store medical records for clinics, from charging exorbitant fees to patients trying to access their own files.

“Nothing was ever done with it for reasons that aren’t clear to me. It’s been sitting on the backburner since 2006, even though the IPC expressed support in 2008,” Kulbatski told CTVNews.ca during a telephone interview in September.

In her petition, which will be presented to the Legislative Assembly by her local MPP Gila Martow later this month, Kulbatski asks the Government of Ontario to enact the ministry of health’ proposed regulation to enable “accessibility, transparency, and accountability” in the health-care industry.

“If health care institutions have nothing to hide, access to medical files should be hassle-free!” the petition's cover letter reads.

According to the Legislative Assembly of Ontario’s website, the government must file a response to the petition within 24 sitting days of its presentation in the legislature.

Kulbatski took up the cause after the University Health Network (UHN), which oversees the Princess Margaret Cancer Centre and Toronto General Hospital where her father was treated for cancer before his death in 2018, charged her more than $1,100 last June to have his 3,000-plus-page medical file electronically transferred on to a CD for her.

According to the invoice, Kulbatski was charged a $30 administrative fee, $10 for the CD, and 25 cents per page after the first 20 pages in the file. She appealed the charges because she said the hospital changed their online fee schedule and backdated it to the day before her request was submitted to include a new 25 cents-per-page charge for electronic files. An earlier version of the online policy, which Kulbatski took a screenshot of when she first visited the site, showed the 25 cents-per-page charge was only for printed copies.

Kulbatski said that means she only should have been billed $40 – comprising the $30 administrative fee and the $10 CD -- which she said adheres to the ministry of health’s 2006 recommendations.

The hospital, on the other hand, said the extra costs on the updated online fee schedule were not new and the policy was updated to “provide more detailed information about costs over and above” the initial $30 administrative fee.

“These extra costs – which are not new - pertain to things such as converting often extensive paper records to electronic files, and careful review of files for accuracy,” Alexandra Radkewycz, a senior public affairs adviser for UHN, wrote in an emailed statement to CTVNews.ca in July.

Although UHN agreed in July to reissue the invoice at $40, because the timing of the request and the updated policy coincided, Kulbatski said the revised fee schedule with the 25 cents-per-page charge for electronic files still appears on the hospital’s website.

“Anybody who comes along to that particular hospital and they request a large electronic file has no recourse but to pay what’s listed on the new fee schedule, which means they could be facing over $1,000,” she explained.

‘It happens all the time’

Kulbatski said she’s not alone in her experience and that accessing medical records is a common problem in Canada.

“This is an issue across the board, both in hospitals and in medical offices,” she said. “I think provincial governments across the country should be looking into this.”

In July, Kathleen Finlay, the founder of the Toronto-based advocacy group the Center for Patient Protection, said it’s one of the most frequently raised issues she encounters in her work.

“It happens all the time,” she said.

The centre’s website states that “it’s not uncommon for patients and families to be charged up to several thousand dollars for those records. Charges of $1,000 are frequent.”

While their prospective bill wasn’t in the thousands, Grace and Wyman Cove from Amherst, N.S. said they were going to have to pay hundreds of dollars to obtain copies of their medical records after their family doctor closed his practice.

The seniors told CTV News Atlantic in September that a private data storage company was in possession of their records and they would need to pay more than $300 for copies of the files, which they couldn’t afford.

Family physicians often hire private data storage companies to hold on to patients’ records after they close their practice because doctors are required by provincial law to secure those files for a minimum number of years, which varies by province, but is usually at least 10 years.

Thankfully for the Coves, the data storage company agreed to work with them to ensure they will be able to access their records.

Not everyone is that lucky, however, and Kulbatski said she hopes her petition will encourage the Ontario government to take action on the matter. She said patients deserve to know what kind of treatment they’re receiving.

“I think patient safety depends on hassle-free access to medical records,” she said. “I think it’s crucial because it holds the health-care system accountable.”