Giant stinking flower to bloom for 1st time in 17 years 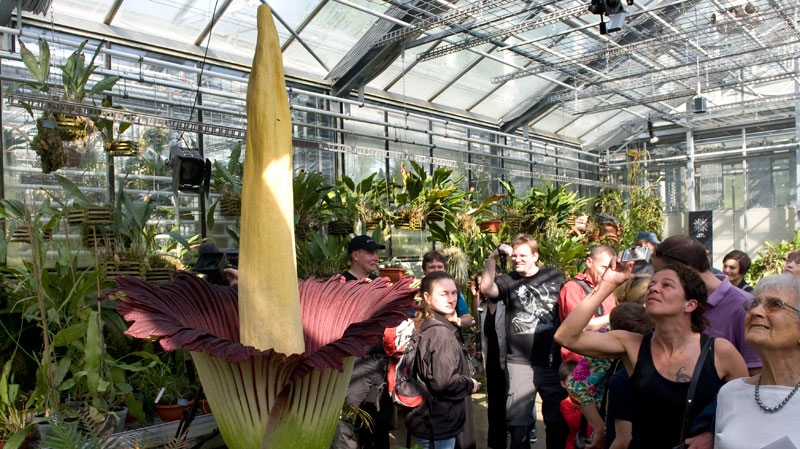 Its bloom is said to smell like a cross between rotting cheese and rotting flesh. But thousands of people are expected to hold their noses and line up anyway to watch as a spectacular Titan Arum flower blooms this weekend for the first time in its 17-year-old life.

Thousands of plant lovers have already flocked to The Basel Botanical Gardens in Basel, Switzerland, to see the Titan Arum (Amorphophallus titanum) as it flowers.

The 2-metre-tall, aptly dubbed "Corpse Flower" will be in full bloom Saturday for only a matter of hours before wilting away, with its keepers expecting the bloom to collapse by Sunday.

As it blooms, it will emit the noxious scent that makes it famous, while an expected 10,000 onlookers witness its rare beauty.

The Corpse Flower is native to the Indonesian island of Sumatra. Because the species it so difficult to cultivate, worldwide, there have been only 134 recorded artificial cultivation blooms. The last time one bloomed in Switzerland was 75 years ago.

The Corpse Flower remains a bit of mystery to botanists, but it's thought that it uses its pungent scent to attract the insects it needs for pollination.

The insects dive into the stem that houses the flower, where they become trapped and covered in the plant's pollen. When the flower dies back, the insects are released.

After the blooming, the corm, or tuber, of the plant lies under the ground to rest for years. It puts out a single, six-metre tall leaf, which looks more like a tree, and which it uses to gather enough energy to allow the plant to bloom again.

And if you noticed that the flower is somewhat phallic in shape, you're not the only one to have spotted that. Its genus name Amorphophallus comes from Greek and means "shapeless phallus." The species name titanum, you won't be surprised to learn, means "extremely large."