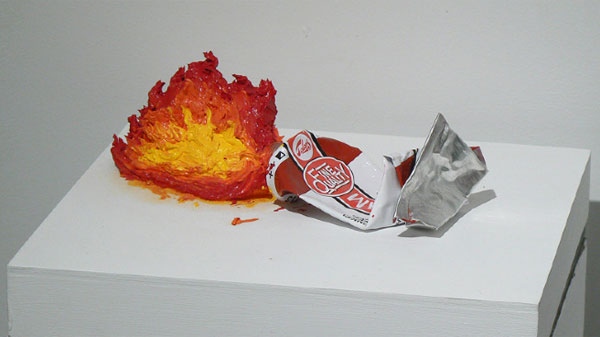 A Montreal art gallery says a funeral will be held Tuesday in New York for Mathieu Lefevre, a promising Canadian painter and sculptor who died last week during a cycling accident in Brooklyn.

Galerie Division, which displayed Lefevre's work, says the 30-year-old Edmonton native died last week when a flatbed truck made a right-hand turn and hit him as he rode a bike in an industrial part of Brooklyn, where he had a studio.

"A lot of people were looking at him as one of the great, great upcoming artists in Canada," said Charbonneau.

A graduate of L'Universite du Quebec a Montreal, Lefevre was known for injecting a sense of playfulness, satire and humour into his pieces. Through paint, sculpture and photography, he purposefully distorted and misinterpreted language, signs, symbols and meaning relating to art history.

His works include an oil on canvas bearing the words "I Don't Get It," and a blank canvas that has a bicycle wedged between the wooden frame in the back and the title "My Bike Disguised as Contemporary Art."

"You could not repress the laughter."

On his website, Lefevre wrote that he was "interested in images, social myths, networks and systems that surround and structure us, often in an unconscious manner."

"My pieces raise questions as to what art can be, what it is worth and what is its role in a cultural and commercial framework," said his bio.

In the spring, Lefevre represented Canada at the Prague Biennele in the Czech Republic. His works have also been displayed in Quebec City, Toronto and New York, where he was planning two upcoming shows.

"It's very hard for a Canadian artist to make it in New York City and at 30 years old he already had two shows planned," said Charbonneau.

"He was really developing a great network in New York. ... He was very ambitious."

Charbonneau said the funeral will be Tuesday at a small chapel in Brooklyn due to logistics, adding that memorials will also likely take place in Montreal and Edmonton, where Lefevre's parents still live.

Galerie Division is now brainstorming ways to keep Lefevre's memory alive and get his work out into the public domain.

"There are great artists but there are also great (people) and Mathieu was really, really a great guy," said Charbonneau.