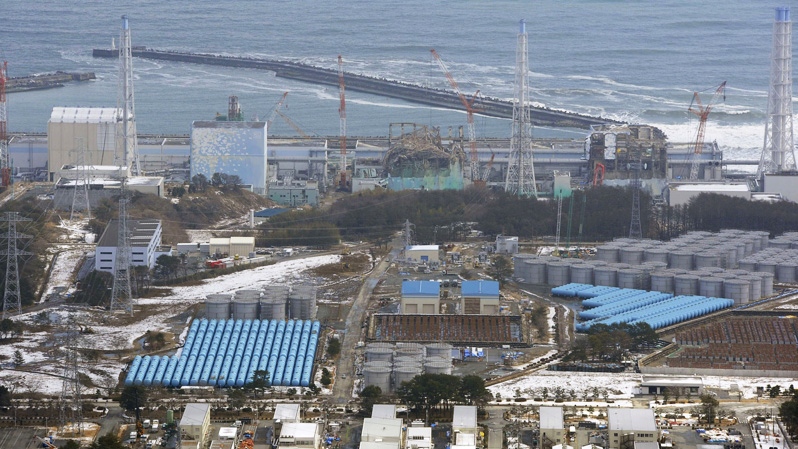 More than a year after a devastating earthquake and tsunami triggered a massive nuclear disaster, experts are warning that Japan isn't out of the woods yet and the worst nuclear storm the world has ever seen could be just one earthquake away from reality.

The troubled Reactor 4 at the Fukushima Daiichi nuclear plant is at the centre of this potential catastrophe.

Reactor 4 -- and to a lesser extent Reactor 3 -- still hold large quantities of cooling waters surrounding spent nuclear fuel, all bound by a fragile concrete pool located 30 metres above the ground, and exposed to the elements.

A magnitude 7 or 7.5 earthquake would likely fracture that pool, and disaster would ensue, says Arnie Gundersen, a nuclear engineer with Fairewinds Energy Education who has visited the site.

The 1,535 spent fuel rods would become exposed to the air and would likely catch fire, with the most-recently added fuel rods igniting first.

The incredible heat generated from that blaze, Gundersen said, could then ignite the older fuel in the cooling pool, causing a massive oxygen-eating radiological fire that could not be extinguished with water.

"So the fear is the newest fuel could begin to burn and then we'd have a conflagration of the whole pool because it would become hotter and hotter. The health consequences of that are beyond where science has ever gone before," Gundersen told CTVNews.ca in an interview from his home in Vermont.

There are a couple of possible outcomes, Gundersen said.

Highly radioactive cesium and strontium isotopes would likely go airborne and "volatilize" -- turning into a vapour that could move with the wind, potentially travelling thousands of kilometres from the source.

The size of those particles would determine whether they remained in Japan, or made their way to the rest of Asia and other continents.

"And here's where there's no science because no one's ever dared to attempt the experiment," Gundersen said. "If it flies far enough it goes around the world, if the particles stay a little bigger, they settle in Japan. Either is awful."

Essentially, he said, Japan is sitting on a ticking time bomb.

The damaged Reactor 4 cooling pool was reinforced by workers who went in and "jury-rigged" it after the tsunami, but the structure still contains a massive amount of fuel, Gundersen said.

Reactor 3 has less fuel inside its cooling pool, but it has not been strengthened since the disaster and poses a greater risk of failing.

The solution, Gundersen said, is for the Tokyo Electric Power Company (TEPCO) to immediately begin the process of transferring the fuel rods from the cooling pools to dry cask storage -- a massive and costly endeavour, but one he said is absolutely essential.

To even begin the removal process at Reactor 4, TEPCO would first have to construct a crane capable of lifting the 100-tonne fuel rod canister, since the original crane was destroyed in the disaster last year.

In order to do that, they would have to build a massive structure around the existing pool to support the new crane, which would then be used to lift the fuel rod canister from the water, down to the ground and into a steel and concrete dry-cask.

All this of course, has to be done in a highly contaminated area where workers must wear protective suits and limit their radiation exposure each day, adding time and expense to the process.

Still, with the consequences so high, Gundersen said there's no time to lose.

"This is a 'now' problem, this is not a 'let's-wait-until-we-get-the-cash-flow-from-the-Japanese-government' problem. The consequences of a 7 or 7.5 earthquake don't happen every day, but we know it happened last year so you have to anticipate that it will happen," Gundersen said.

‘Fate of the world' depends on Reactor 4

He's not alone in pressing the Japanese government to adopt a sense of urgency about the Reactor 4 dilemma.

Robert Alvarez, a former top adviser at the U.S. Department of Energy, also expressed concern in a letter to Akio Matsumura, a Japanese diplomat who has turned his focus to the nuclear calamity.

Matsumura had asked Alvarez about the risk associated with Reactor 4.

"The No. 4 pool is about 100 feet above ground, is structurally damaged and is exposed to the open elements," Alvarez said in his response. "If an earthquake or other event were to cause this pool to drain this could result in a catastrophic radiological fire involving nearly 10 times the amount of Cesium-137 released by the Chernobyl accident."

Mitsuhei Murata, Japan's former ambassador to Switzerland and Senegal, has also made it his mission to convince the UN and the world that urgent action is needed.

"It is no exaggeration to say that the fate of Japan and the whole world depends on No. 4 reactor," Murata said in a recent letter to UN Secretary-General Ban Ki-moon, in which he urged him to back efforts to address the problem.

Last week, Japanese Prime Minister Yoshihiko Noda said most major threats have been eliminated and "cold shutdown" status had been achieved in December.

But Noda declined to comment directly on the risk posed by Reactor 4, only telling The Wall Street Journal's Asia edition that it was important to "remain vigilant."

"We have passed a situation where people have to run far away or evacuate," he said. "Ahead of us are time-consuming tasks like decontamination and decommissioning (of the plants). We will proceed with the utmost care."

Gundersen said the remaining challenges at the Fukushima Da-Ichi site are not technological. Everyone knows what needs to be done and how to do it, he said. The challenge lies, rather, in convincing Japan that action must be taken now.

"We're all in a situation of having to pray there's not an earthquake. And there's the other half of that, which is pray to God but row toward shore. And Tokyo's not really rowing toward shore right now," Gundersen said.