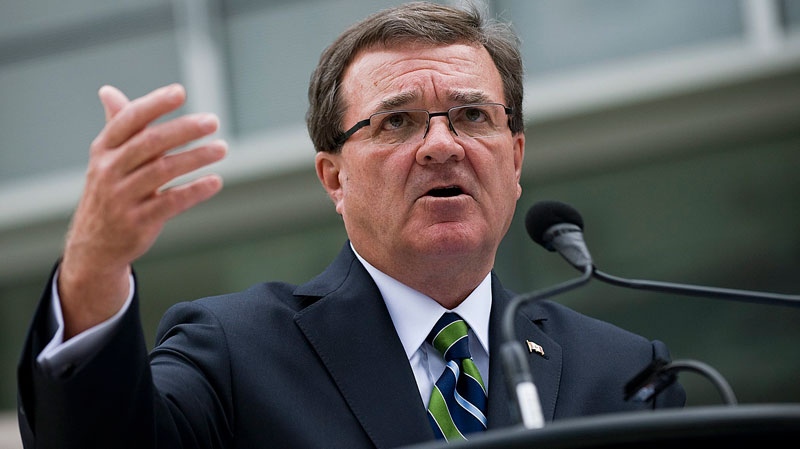 OTTAWA - Finance Minister Jim Flaherty is asking a Senate committee to look into the price gap that continues to exist across the Canada-U.S. border.

In a letter to the Senate finance committee released Wednesday, Flaherty said he is irritated that the gap continues to exist even though the Canadian dollar has been worth more than the U.S. currency for most of the year.

In fact, Flaherty points out that the Canadian currency has been strengthening over the past five years.

The Canadian dollar's strength has presented challenges to entrepreneurs, exporters and the economy but Canadian consumers aren't getting full payback in the form of the prices of goods sold in this country, he says.

"When they (consumers) spend their hard-earned money, they deserve to pay a price that reflects the strength of the Canadian economy."

While there is no official cross-border comparison of consumer prices or the impact of currency fluctuations, Bank of Montreal economist Douglas Porter said last April that Canadians pay on average 20 per cent more on many items.

Comparing a limited basket of goods, Porter found that the gap had expanded during the run-up of the Canadian loonie -- which rose above US$1 late last year for the first time since the recession and stayed above par for most of 2011.

"When we last looked at this issue in the summer of 2009, the spread was just under seven per cent," Porter said in the report at the time.

Canada's retail industry has often said it takes months to adjust to currency fluctuations, due to the lead time required to import goods. They've also said their American counterparts have several built-in advantages.

Porter stopped short of accusing Canadian retailers of gouging consumers, saying there are some legitimate factors contributing to the gap, including higher costs.

In his letter, Flaherty asks the Senate committee to look into how prices are impacted by the size of the Canadian retail market, transportation and freight costs, tariffs on consumer goods, real estate costs and other factors.

"We need to ensure prices are continuing to move in the right direction and reflect the value of our stronger dollar," he says. "We must also better understand why certain price discrepancies may continue to exist."

Flaherty says he hopes the committee can start probing the issue during the upcoming fall session of Parliament.