Firefly spotters wonder if the species is fading away 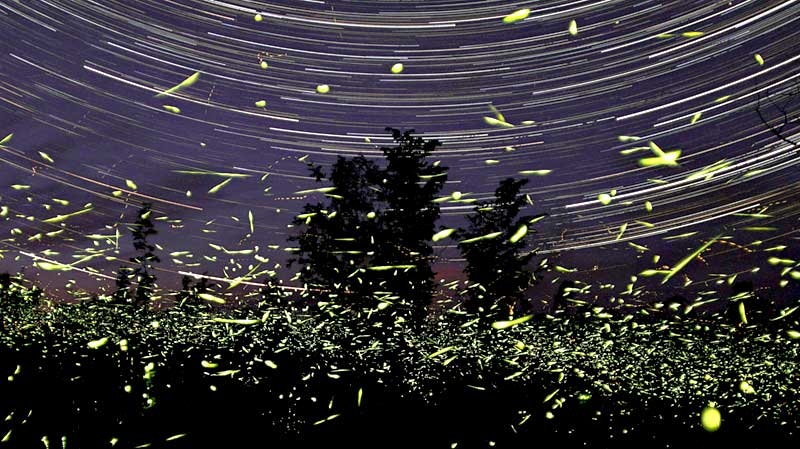 In this one hour exposure photo taken June 22, 2009 and provided by Steve Irvine, fireflies fly in front of his home in Big Bay, Ontario in Canada. A childhood rite of passage -- catching fireflies in Mason jars and watching them glow -- could be fading along with the dog days of summer.(AP Photo/Courtesy Steve Irvine)

There's something special about a warm summer night at dusk, around a campfire or under the stars in the backyard, when the darkness is suddenly illuminated by bright, fast flashes of light.

But are fireflies -- and the memories they inspire -- fading away forever?

The Museum of Science Boston wants to find out. Motivated by reports of fewer and fewer firefly sightings each summer, the museum has been recruiting backyard volunteers to study the luminescent flying beetle and report their sightings online.

The project, dubbed Firefly Watch, tracks and maps all the reports across the U.S. and Canada in an effort to determine the exact range of the firefly, their "flashing" season and whether they really are in decline

"It's funny, as ubiquitous as fireflies are, there isn't a lot of scientific study or information about them," Paul Fontaine, the museum's vice-president of education, tells CTV.ca.

"We thought it would be a great opportunity to get people outside, looking at nature, recording their observations using technology, and for us to collect a database that would allow scientists and researchers to answer questions like: What are the range of some of these species?"

The organizers of the study -- a joint project between the museum and two universities -- hope to learn more about how fireflies are reacting to factors such as urban sprawl and loss of habitat, drought, increased ambient light and the effect of pesticides and fertilizers.

There are dozens of species of fireflies across North America, and each have their own unique characteristics and behaviours, Fontaine said.

"There's one firefly that is active just at dusk and dawn, so it needs to have those twilight conditions," Fontaine said.

Fontaine added that the study organizers also want to know: "If there is a lot of ambient light in an environment, does that create permanent twilight conditions and is this firefly increasing its activity because it senses light in its environment?"

They also want to know whether artificial lights are interfering with the firefly's ability to attract a mate, Fontaine said.

Male fireflies typically fly around in open areas bordered by trees, flashing their lights, while the females perch in the trees and take in the show.

"When she sees a flash she likes she'll respond with a flash back and attract the male to her," Fontaine said.

If too many streetlights are nearby the females simply can't see the males, despite their best efforts to woo them.

And as urban sprawl and development swallows up those open areas interrupted by trees, there are fewer and fewer places for fireflies to perform their courting ritual, Fontaine said.

The project has just wrapped up its third year, with hundreds of volunteers reporting sightings, from Texas to Ontario and PEI, creating a detailed and interactive firefly map.

Volunteers are asked to spend 10 minutes, once a week, recording data such as the location, time and temperature of their observance, and the number of fireflies and the colour and pattern of their flash.

They are even asked to note when they don't spot fireflies -- information that is also considered vital to the study.

The last sighting of the summer in Canada was on Sept. 2 near Peterborough, Ont. Before that unusually late observance, fireflies were spotted and recorded on Aug. 21 near Wiarton, Ont. and in Nova Scotia near Red Point.

"I was very surprised to see this lone, flying firefly at this time of the year," wrote the volunteer in Wiarton. "Firefly activity stopped around here about a month ago. This is a new "latest sighting" record for me."

This summer fireflies were spotted as far south as the southern tip of Texas, and as far north as Ottawa.

In 2009, however, fireflies were spotted as far north as Sturgeon River, Ontario, in the bush northwest of Thunder Bay. And in 2008 they were seen in southern Manitoba -- a surprise to Fontaine and the scientists involved with the project.

There have been many such surprises along the way. For years, Fontaine said, conventional wisdom has been that fireflies don't inhabit areas west of the Rockies. But that has also now been put into question.

"We've had one or two stubborn observations of flashing fireflies west of the Rockies...so what does that mean? Is it something that requires further study? We're hoping folks are intrigued by that and get outside and look more closely."

One of the goals of the project -- which is set to run for 10 years -- is to enlist more volunteers who live at the fringes of the known habitat area. The goal is to establish more defined boundaries for the bioluminescent firefly's range, which is currently a roughly sketched rhombus encompassing the eastern U.S. and the southeastern half of Canada

A lot of other questions remain as well, but with only three years' worth of data it's too early to draw any definitive conclusions about the fascinating little lightning bugs.

However, one thing is certain, Fontaine said. Fireflies -- in declining numbers or not -- still possess the ability to intrigue and inspire those who witness their simple beauty.

"Nature retains the ability to awe people," he said.

"There's something about a tiny little flying fellow traveller on this planet who is beautiful and bioluminescent and glowing and flying -- it kind of stops you in your tracks."