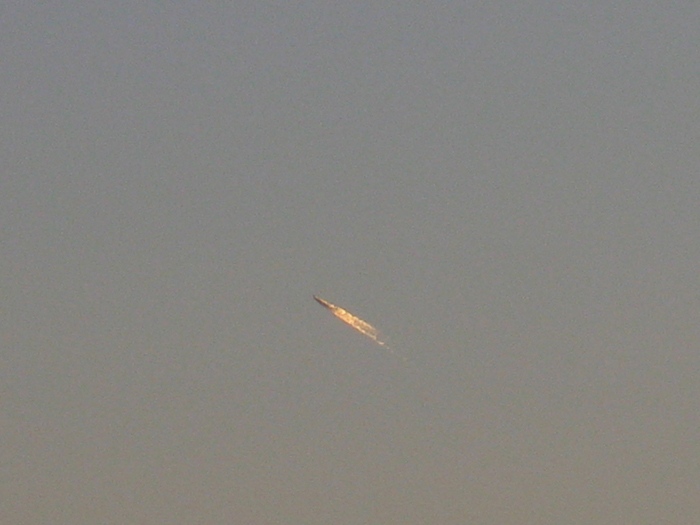 The alleged missile is seen in this image provided to CTV.ca by Darlene Stewart.

ST. JOHN'S, N.L. - A UFO researcher and author from Finland calls it "the December Phenomenon."

Bjorn Borg, a 63-year-old retired economist, says each winter he can count on media reports of what appear to be rocket or missile sightings of the kind seen last week over Newfoundland's south coast.

"Every year this comes up in the news," he said Monday from Helsinki.

But what people are really seeing is the effect of jetliner vapour trails catching winter sunlight, he said.

Borg studied photos taken at sunset a week ago in Harbour Mille, N.L., by resident Darlene Stewart. He believes what she and two others witnessed was nothing more than the optical illusion created when setting sun hits a jetliner at just the right angle.

"The sun is shining on the (condensation) trail. In winter time, the colour of the trail will show up (in) very strong yellow or even red. It looks like fire."

Borg said he has documented the same phenomenon more than 20 times around the world in recent years.

His theory was backed up Monday by Chris Stevenson, local president of the Royal Astronomical Society.

"I've seen this several times," he said of the effect created when transatlantic aircraft, which often travel in pairs, reflect sunlight far overhead after daylight has faded on the ground.

The resulting bursts of colour can be spectacular and startling, Stevenson said.

"They might strike fear in the hearts of people who don't know what they're looking at."

Stewart's photo is obviously not a rocket because the contrail goes transparent at the end, Stevenson said.

"A rocket plume would be thick all the way back to where the rocket was launched. Again, had the sighting not been at sunset, I would have taken this a bit more seriously."

Still, Stewart is adamant that what she captured on her digital camera was no jetliner.

"We didn't hear any noise. No noise. Every airplane that comes over here, whether we're inside or the TV's going, you still hear them. A jet may be farther off but it still makes noise.

The federal government had little to say Monday.

"There is no indication that there was ever a rocket launch," said Public Safety spokesman Chris McCluskey before declining further comment. He suggested other queries be put to Defence Department, which had no immediate response.

The RCMP deferred to Public Safety.

Newfoundland and Labrador Premier Danny Williams said Friday that he, too, had heard suggestions that the sightings may have been reflected aircraft.

He said he believed Prime Minister Stephen Harper and Defence Minister Peter MacKay when they told him there was no evidence of any missile launch -- foreign or otherwise.

"They've checked everything within the defence systems," Williams said.

"Something was seen. But from a Canadian defence perspective, I'm satisfied ... that there certainly wasn't anything that was being hidden by the government of Canada."