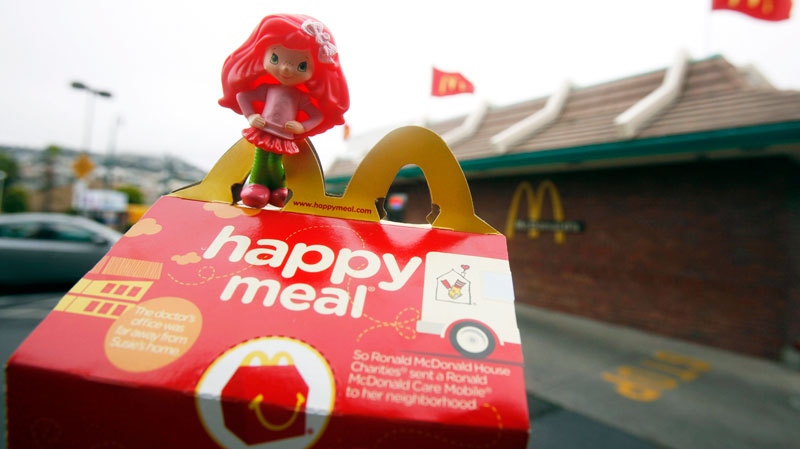 A Happy Meal box and toy are shown outside of a McDonald's restaurant in San Francisco on Friday Oct. 1, 2010. (AP / Jeff Chiu)

The plan this week by San Francisco city officials to ban toys from kids' meals that don't meet nutritional guidelines was either long overdue, or yet another example of governments interfering with citizens' liberty to choose.

At least, that seemed to be the two directions the pendulum swung on the commments left on the story that appeared on CTV.ca.

Some readers such as Giselle LeBlanc from Dieppe, called it "a small step in the right direction" and "a win for kids!" "ZakHfx" responded: "With any luck this law will make companies think about the junk food that they are marketing to kids."

But plenty of other readers, such as "Joel Bain," said they were tired of the state "trying to solve people's social ills with food by trying to act like our parent."

"The Big Cee" said: "The nanny state government should just butt out of what I want to put in my stomach." And B. Kelley of Ontario offered this "news flash" for politicians: "We really are smart enough to find our way through life without your self-ascribed superior intellect and wisdom herding us like sheep through a gate of your choosing."

The ban is once again raising questions about what role governments should play when it comes to its citizens' health. Should people have the right to make their own food decisions, even if they're the wrong decisions? At what point is it fair for governments to step in with regulation?

Dr. Yoni Freedhoff, medical director of the Bariatric Medical Institute in Ottawa, doesn't see the ban on fast food meal toys as an attack on liberty or free will. Instead, it's a ban on unfair marketing.

"People aren't being told what to eat. People can still buy the food McDonald's has always sold," he told CTV.ca. "It's just that McDonald's can no longer entice people to buy that food on the basis of a toy that might encourage a child who can't understand nutrition."

Under the ruling, scheduled to take effect in December 2011, San Francisco restaurants will be allowed to include a toy with a meal only if the meal contains fewer than 600 calories, includes fruit and veggies, and meets other standards.

Though McDonald's is hardly the only fast-food chain to offer toys with kids' meals, the company was quick to respond. Spokeswoman Danya Proud said: "We are extremely disappointed with this decision. It's not what our customers want, nor is it something they asked for."

"McDonald's didn't consult with parents about whether they wanted toys in the kids' meals. You weren't part of the decision. That was a large corporation paying a large fee to a marketing firm that told them 'Here's how you can get people to buy more of these meal for their kids.' Well guess what folks? That's classic manipulation," he told CTV.ca.

Katz, Freedhoff and groups such as the Center for Science in the Public Interest and Corporate Accountability International have long protested marketing fast food to children. They note that studies have shown that kids don't have the ability to discern truth from advertising, so ads directed at kids are nothing more than "predatory marketing."

Katz says when a government entity steps in to limit that marketing, it's not an infringement on consumer choice; it's levelling the playing field so that parents can make food decisions more freely.

Freedhoff has sympathy for parents who struggle to feed their children amid a world that has placed quick, cheap food on every corner. He says our environment has changed in the 30 years since the Happy Meal was introduced and the obesity crisis shows it's time for governments to step in with measures such as the San Francisco ordinance.

"The government has every right in the world -- in fact, it has an obligation to respond to that environmental change, not by banning 'Happy Meals,' but certainly by prohibiting the marketing of those meals to appeal to children who would otherwise not necessarily want to go and purchase those meals," he says.

As for criticisms that the ban will have little effect, that limiting the marketing of fast food restaurants is not going to solve the obesity crisis, Freedhoff responds: it's a start.

"There is no one intervention that is going to stem the tide of childhood obesity or diet-related chronic disease. But there are many things that we know are part of the problem. And something like predatory marketing toward children of unhealthy food is one of the things that is absolutely a player," he says.