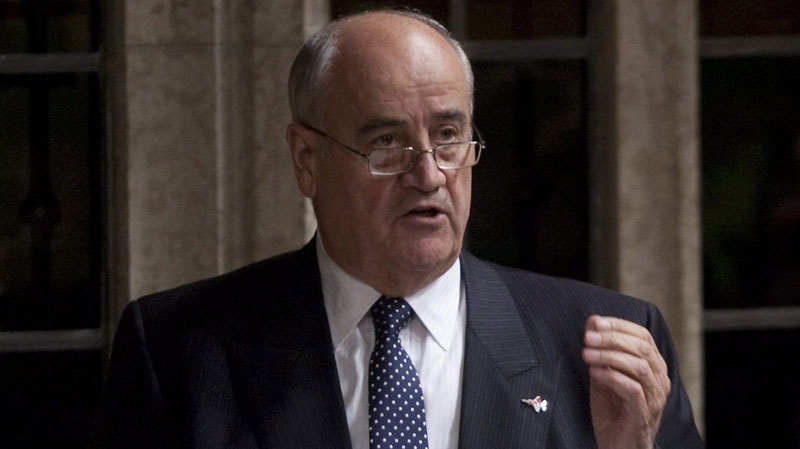 Member of Parliament Julian Fantino responds to a question during Question Period in the House of Commons in OTTAWA, ON Thursday November 17, 2011.

OTTAWA - The minister in charge of buying equipment for the military says there is no comparison between what Norway and Canada will pay for the F-35 stealth fighter.

Julian Fantino, the associate defence minister, told a House of Commons committee Thursday that "each country has its own separate and distinct formula" for calculating how much they'll spend on each aircraft.

The opposition New Democrats pointed out earlier this week that Norway estimates it will spend $40 billion for 52 of the radar-evading fighters -- considerably more than the $16 billion the Harper government says it will spend for 65 jets.

Fantino says the Norwegians are asking that the F-35 be able to fire different kinds of weapons and he suggested those considerations are driving up the cost for that country.

Norway and Canada are purchasing the same base model of stealth fighter -- known as the F-35A. It is capable of taking off from standard runways, unlike the two other variants meant for aircraft carriers and short runways.

Both countries have similar needs and have collaborated on modifications, including the installation of a drag chute to help slow the planes on icy northern runways.

The Norwegians have asked the U.S. manufacturer, Lockheed Martin, to include both software and structural modifications that would allow the F-35 to fire anti-ship weapons, known as a Naval Strike Missile.

It's unclear whether that would account for the huge price difference, especially since Australia is splitting the cost of the conversion with the Scandinavian country.

Fantino says it's very difficult to compare the purchases "dollar-for-dollar," but promised the all-party committee he would provide a more detailed explanation a some later date.

Chris Alexander, the parliamentary secretary to the defence minister, says the Commons committee will soon launch a study on the defence of North America and that the F-35 will figure prominently.

Opposition MPs on the committee were not swayed by Fantino's argument. They're demanding to see a straight-up, detailed comparison of the Canadian and Norwegian purchases, but defence officials objected by saying much of the information the Liberals and NDP want to see belongs in confidence to Norway.

"There are base aircraft, with a purchase series of options and spares and a lot of other things for that aircraft. I don't think it would be appropriate for us to be speculating on exactly what the Norwegians have purchased as opposed to what we know we have purchased."

Liberal MP Frank Valeriote said it's clear "we don't know whether they are apples and oranges" being compared. Until that analysis is done, said Valeriote, nobody can rely on Fantino's explanation.

The parliamentary budget officer earlier this year accused the Conservatives of low-balling how much National Defence will spend on the controversial replacement for the aging CF-18s.

Kevin Page said the bill to taxpayers over the three decades the F-35 aircraft is expected to be in service is more like $30 billion, a figure the government has gone to great lengths to discredit.