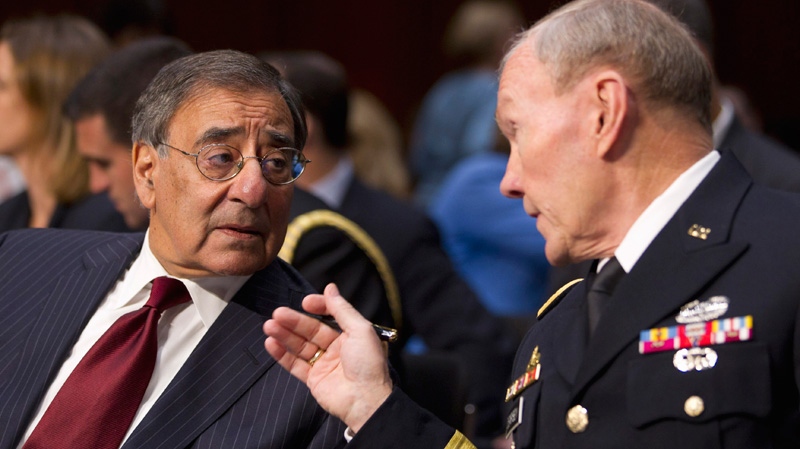 Despite signs that budget cuts may signal the end of plans in the U.S. to procure a fleet of new generation high-tech fighter jets, Canada is standing behind the besieged F-35 program and hailing its benefits to the economy and the military.

NDP MPs hammered the government over yet another indication Tuesday that the F-35 program, which has been hit by delays and cost overruns, is on shaky ground.

U.S. Defence Secretary Leon Panetta warned Congress this week that the U.S. military is looking at some ugly choices if lawmakers cannot come to an agreement on how to cut US$1.2 trillion from the deficit, including cancelling its Joint Strike Fighter program.

Canada has made plans to spend billions on an F-35 fleet of its own, which will be built by the U.S.-based Lockheed Martin.

On Tuesday, the opposition accused the Harper government of continuing to support a program that was "doomed to fail from the start."

Julian Fantino, the associate minister for defence, said cancelling the program would throw 80,000 Canadians out of work.

"The only crusade is the crusade to malign a very important asset for our young men and women who actually use the equipment, and also to maintain our Canadian sovereignty as well as creating jobs," Fantino told the House of Commons. "The member opposite is stuck in a time warp of useless rhetoric, misinformation and misrepresentation about the benefits to Canada of the F-35 program."

Should Congress fail to make progress on the deficit by Nov. 23, Panetta said the military will be legally obligated to slash $500 billion from its operations over a 10-year period, in addition to $450 billion in cuts that are already underway.

Panetta wrote a letter to two members of the Senate Armed Service Committee outlining what some of those cuts would be.

"Facing such large reductions, we would have to reduce the size of the military sharply," Panetta said in the letter sent to Senators John McCain and Lindsey Graham on November 14.

"Rough estimates suggest after ten years of these cuts, we would have the smallest ground force since 1940, the smallest number of ships since 1915, and the smallest Air Force in its history. We would also be forced to terminate most large procurement programs in order to accommodate modernization reductions that are likely to be required."

In his letter, Panetta said the Department of Defence could decide to "terminate" its Joint Strike Fighter program.

His letter does not say how likely it is that the U.S. military would actually kill the Joint Strike Fighter. But he said that doing so could save Washington an estimated $80 billion.

If Washington pulls the plug on its own F-35 plans, it is unclear what will happen to the development timeline for the planes that Canada wants to replace its aging fleet of CF-18 Hornets.

The government had previously stated it intends to purchase 65 Joint Strike Fighters beginning in 2017. Original estimates suggested each plane would cost about $75 million.

However, the parliamentary budget officer has suggested the price tag could double, and a report from the Pentagon earlier this year indicated that unforeseen production costs will likely push up the plane's price tag to an unknown sum.

During question period, NDP MP David Christopherson said with Israel, Turkey and Norway, and now potentially the United States, reconsidering plans for their own fleets of F-35s, the time has come for the government to find another aircraft.

"It's clear to everyone that the Conservatives have blown this file totally. The F-35 price tag balloons every time another country drops its order. With the Americans now talking about pulling the plug, the death knell is ringing louder and louder on the F-35," Christopherson said. "When will the minister finally admit the F-35s are an untendered procurement boondoggle in the making? When will he put this contract out to tender?"

Fantino countered that the F-35 contract was subject to a "tendering process" and said the aircraft was already in production and represented the "kind of equipment our men and women (in the air force) need to do their jobs effectively and achieve mission success."