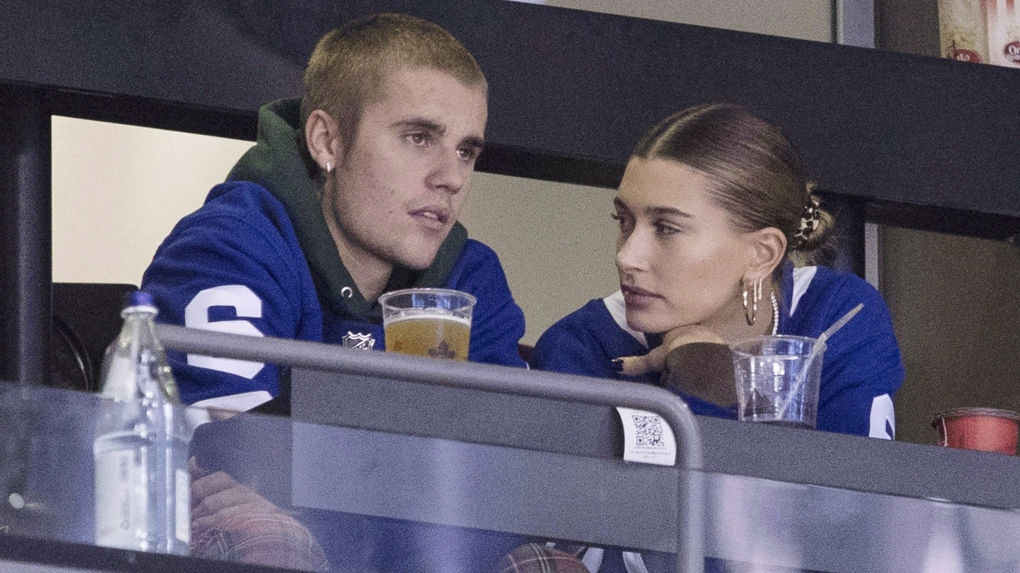 Justin Bieber watches alongside his wife Hailey Baldwin, right, during NHL hockey action between the Philadelphia Flyers and the Toronto Maple Leafs, in Toronto on Saturday, Nov. 24, 2018. (THE CANADIAN PRESS / Chris Young)

TORONTO -- One of Canada’s most well-known musical exports has stirred up a heated debate involving Tim Hortons.

Justin Bieber took to Instagram Friday to express his “outrage” over the coffee chain’s redesigned lids, even going so far as to post a poll asking his fellow Canadians to weigh in on the issue.

“These new lids are uncomfortable on the mouth and you get very little liquid each drink,” Bieber wrote in an Instagram caption Friday.

“It's a damn outrage and needs to be changed back.”

At the time, Tim Hortons president Alex Macedo told The Canadian Press, "The only people who are going to be pissed off are dry cleaners and car-washing companies,” in a nod to the many drive-thru patrons who had complained about the old lids.

Macedo said the new lids, emblazoned with a patriotic maple leaf, were “rigorously tested” by thousands of people to ensure they would leak less.

@timhortons I know they could leak but it was easier to drink out of.. the coffe would come out better.. these new lids are uncomfortable on the mouth, and you get very little liquid each drink it's a damn outrage and needs to be changed back. Tbh it shouldn't be plastic find a way to be recyclable let's change the world 1 lid at a time

But, according to Bieber’s post, 70 per cent of his followers agreed that the old Tim Hortons lids were superior to the new lids.

“And with that, Bieber started a protest,” mused another.

Bieber also expressed concerns that the lids weren’t environmentally friendly noting, “it shouldn't be plastic find a way to be recyclable let's change the world [one] lid at a time.”

Hours later, Bieber posted another Instagram dedicated to Tim Hortons, this time showcasing their swift response to his outrage.

“Hi @justinbieber, thanks for your feedback. Sorry you aren’t loving our new lids, but the good news is that they’re made with 100% recyclable plastic,” read the response from Tim Hortons.

“We’d love to have you join our team that’s working to make them even better.”

We're making a a change one lid at a time. Thanks @timhortons