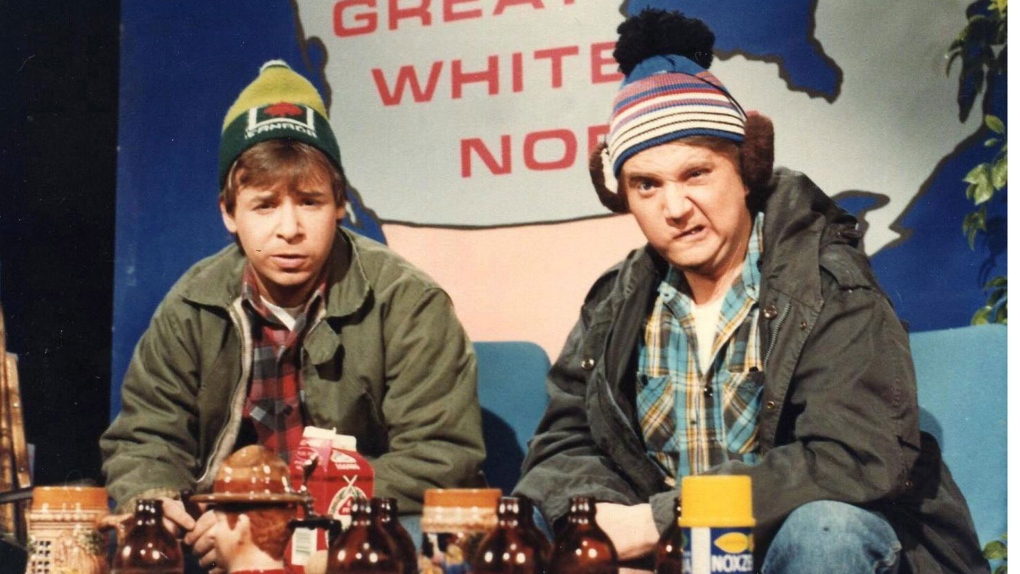 Rick Moranis, left, and Dave Thomas as the characters Bob and Doug McKenzie in a scene from the 'SCTV' comedy series. (THE CANADIAN PRESS)

OTTAWA - Twin pop duo Tegan and Sara, singer-songwriter Murray McLauchlan, and one of the creators of "SCTV" are among the recipients of Canada's most prestigious performing arts awards.

Songwriters and activists Tegan and Sara are getting the National Arts Centre Award for their musical success as well as their advocacy work for equality, gender justice, and progressive social change.

The laureates will be honoured at three events in Ottawa, culminating in a gala at the National Arts Centre on June 2.

Alexander joins "SCTV" stars Eugene Levy and Martin Short as a recipient of the award, presented annually to Canadians "whose accomplishments have inspired and enriched the cultural life of our country."

"I was a little dumbfounded when I got the call, thinking 'Are you sure you got the right Andrew Alexander?"' Alexander says from Chicago, where he runs the storied comedy theatre.

"It's a phenomenal acknowledgment for a kid from Brampton, which is just outside Toronto. It's pretty cool."

He would stack it with performers pulled from Second City Chicago and elsewhere: Eugene Levy, Gilda Radner, John Candy, Joe Flaherty, Andrea Martin and Dan Aykroyd, among them.

"I thought, 'Oh my God,' ABC or CBS is going to invent a show like 'Saturday Night Live' and steal my cast," he recalls. "It was a defensive move."

"There was definitely a golden age," Alexander says of the time.

"You always get asked that question: 'Why?' I can't give you a good scientific answer why, it just was a special time."

But the influence of "SCTV" can still be felt.

"You talk to Judd Apatow, or any of the famous film directors, Jay Roach, Seth Rogen, Steve Carell -- all these people were influenced by 'SCTV' and it's pretty extraordinary."

He laments that the series is not available on television today because he never secured rights to music on the show.

"At the time when we did it, music sync rights weren't even an issue. And then 20 years later it became a very expensive proposition."