'Still chasing something:' Metallica's Hetfield on the pursuit of the ultimate song 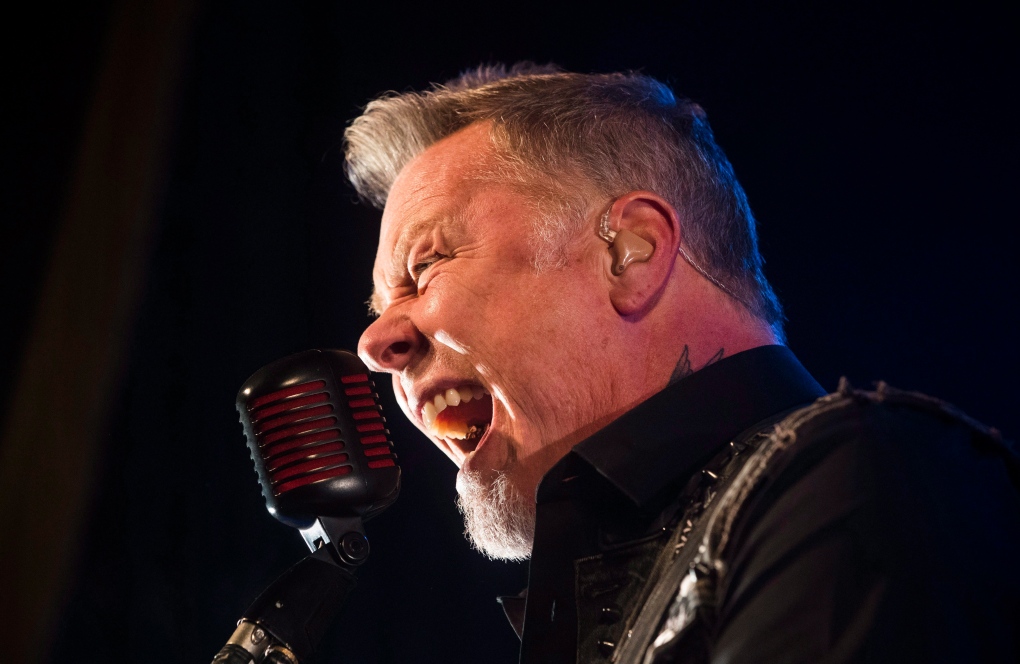 Lead singer James Hetfield of Metallica plays at the Opera House, a small venue with a 950 person capacity, in Toronto, Tuesday November 29, 2016. Proceeds from the show will go to The Daily Bread Food Bank, an organization that helps combat hunger. (THE CANADIAN PRESS/Mark Blinch)

It happened earlier this week as he dove into the opening riff of "Fade to Black" during an intimate show at Toronto's Opera House.

The problem is, he was supposed be playing another song -- "One" -- with a similar intro. Once he realized his mistake, he laughed it off and tried again.

"The fact you've got all your brothers up there, if something goes wrong it's like, 'OK, we can all enjoy this moment together,"' he says with a chuckle afterwards in a hotel room.

"Being able to laugh at yourself, embrace your dorkiness on stage and talk about it is so freeing."

Hetfield and his bandmates were in Toronto on Tuesday to hold a benefit concert for the Daily Bread Food Bank. The show was filled to the brim, hitting the venue's 950-person capacity limit, and fans were ready to rock from the second Metallica took the stage.

While sipping a cup of tea, Hetfield talked with The Canadian Press about his band's latest album, "Hardwired... to Self-Destruct," which sits atop the Canadian and U.S. album sales charts, and why he's abandoned social media.

CP: Metallica doesn't play small theatres very often. What was it like to see the entire room?

Hetfield: There's some weirdos out there -- including us. There was a guy hell-bent on coming up to me and (throwing his middle finger in the air). I remember when it meant "You rock!" or something, in the old days. But now maybe it's a little different. I thought, "You don't like this song?" I got down in his face and it turned into this (makes devil horns). And I was like "OK, we're good!"

CP: Why did you decide to play a show for a food bank?

Hetfield: We did it on the "Death Magnetic" tour (which ran from 2008 to 2010). Any leftover catering at the gig (we decided to) have that go somewhere. Then it became kind of a thing. Supporting local is a great way to actually see your environment improving. So we like doing local things.

CP: Do you guys talk about which charities make the cut?

Hetfield: The four of us all have different views of the world and see things we'd like to help with that are different. So we'll take turns. We all get to feel like we're contributing and feel good about it. (With the food bank) it's just kind of a no brainer. There's nothing political about it, no agenda. It's like: People. Food. Good.

CP: Your charity show drew controversy over ticket prices that were jacked up by resellers on the secondary market. Do you get frustrated when you see that happen?

Hetfield: That's their karma. There's always going to be someone who has an agenda (and) they're going to scoop up as many as they can. You can't stop that. I would just say fans beware. Be smart about it.

CP: Do you think Ticketmaster and other ticket sellers have a responsibility to implement more technology to prevent mass resales?

Hetfield: Technology can help, for sure. Gosh, the way certain things work with security online ... it's harder for me to get onto an airplane. It's hard to believe something more can't be done. There's legal scalping out there too, which is kind of frustrating -- your Stubhubs and what not -- all the sudden, "Hey wow, we just sold 10,000 tickets. And where did they go? To one place? Interesting." We're aware of it and doing what we can. At the end of the day the fan gets screwed and we get screwed. That shouldn't happen.

CP: Nickelback had a tough week in Canada, with a police department in Prince Edward Island jokingly posting on Facebook a promise to play the band's music as punishment for drunk driving. Metallica gets blowback from listeners who don't like your direction. Do you ever feel pressure to dodge backlash?

Hetfield: That's certainly a trap you can avoid. All you have to say is, "We're artists. The end." Whatever we do, we're trying to make the best songs possible. If you don't like the songs, I get it. Don't buy the record, don't come see us. It reminds me of forums and chat sites. It's this crazy fake world where people aren't saying who they are, and they'd never say it to your face. You take two pitbulls, throw 'em in a room, shut the door and they go at it. I have other people look at that stuff.

CP: When did you decide to disconnect? Didn't you have Instagram for a while?

Hetfield: I got sucked into social media. My kids are on Instagram so I wanted to try (and) look like a cool dad. But then that's all I was thinking about -- "Oh, hey I'm here, I can take a picture, put it on Instagram and try and get followers." Mostly it was sucking my time and I started to neglect my real life. It was living in a cyber world and not for me. I have a hard enough time staying present in real life already.

CP: There was eight years between your previous album and this one, which is a lifetime in today's music industry. Are you hoping to speed up the creation process next time and maybe tour less?

Hetfield: We're certainly enjoying this record and still have to learn a few to play live, but I would love to not wait eight years. It didn't seem that long, but for fans sitting at home I totally understand (them thinking,) "Quit playing Antarctica!"

CP: How do you know when to start working on a new album?

Hetfield: Most of the time Lars (Ulrich, Metallica's drummer) and I will sit down and start talking. (We'll say), "We've got this coming up but we need a clean slate after that. Stop booking stuff so we can get in there and open the riff box." Cause once that's open, you can't stop it.

CP: You've been in Metallica for 35 years now. What keeps you motivated?

Hetfield: Music saved my life and it does every day. It helps put me on the right track. Perfectionism, possibly, is helping drive us. I'm waiting to write the ultimate riff and pen the ultimate lyric at some point. Still chasing something -- it's an addiction, I'm sure.