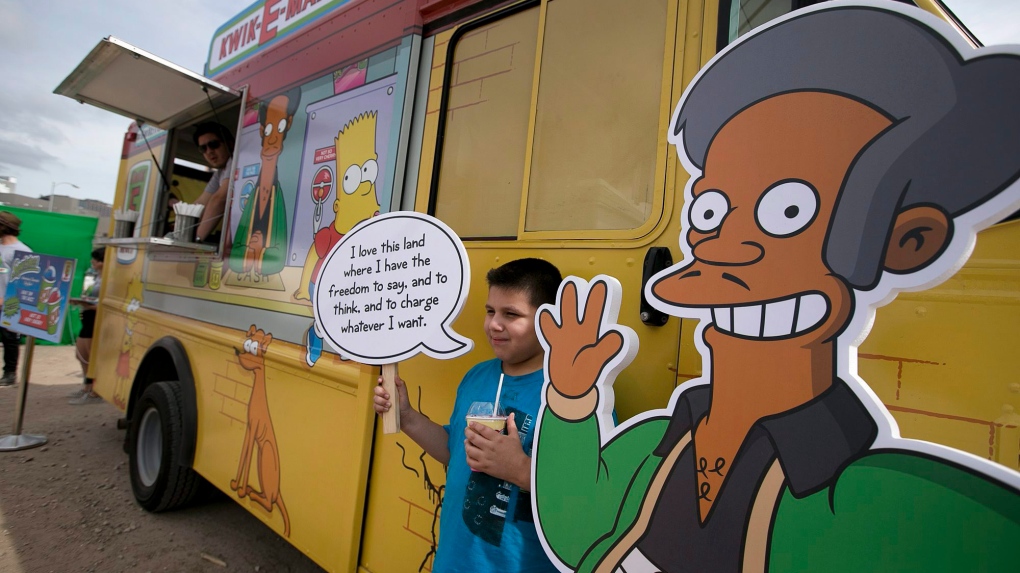 TORONTO -- ‘The Simpsons’ actor Hank Azaria says he will no longer voice the character Apu amid ongoing controversy surrounding the alleged racial stereotyping of the character.

Apu Nahasapeemapetilon is the Springfield convenience store owner known for his catchphrase, “Thank you, come again.”

Azaria -- a white man -- has voiced the character for 30 years. But his depiction of the South Asian character has come increasingly under fire since the release of the 2017 documentary “The Problem with Apu,” which alleges that the cartoon incorporated too many racial stereotypes into the character.

On Friday, Azaria confirmed he would no longer voice the character in an interview with the website Slashfilm.

"All we know is I won't be doing the voice anymore, unless there's some way to transition it or something,” Azaria said.

It remains unclear whether or not the character will be written out of the show.

“What they’re going to do with the character is their call,” Azaria said. “It’s up to them and they haven’t sorted it out yet. All we’ve agreed on is I won’t do the voice anymore.”

Hari Kondabolu, comedian and director of the documentary “The Problem with Apu,” said Friday that his intention was never to have the character removed from the show, but to “discuss race, representation, and my community.”

“If @HankAzaria is indeed no longer doing the voice of Apu, I do hope they keep the character and let a very talented writing staff do something interesting with him,” Kondabolu tweeted.

“My documentary ‘The Problem with Apu’ was not made to get rid of a dated cartoon character, but to discuss race, representation & my community (which I love very much). It was also about how you can love something (like the Simpsons) & still be critical about aspects of it (Apu).”

If @HankAzaria is indeed no longer doing the voice of Apu, I do hope they keep the character & let a very talented writing staff do something interesting with him. If not to better the show, then to atleast spare me some death threats.

In the documentary, Kondabolu references Azaria’s depiction of Apu as, “a white guy doing an impression of a white guy making fun of my father.”

In 2018, ‘The Simpsons’ addressed the controversy during an episode where Marge and Lisa Simpson discuss a politically incorrect book.

During the scene, Lisa says, “Something that started decades ago, and was applauded and inoffensive, is now politically incorrect. What can you do?” She then looks at her nightstand which shows a framed picture of Apu, which features the caption, “Don’t have a cow!”

That response attracted controversy of its own, with many fans calling it “toothless.”

Azaria has also previously addressed the concerns, apologizing to South Asian fans for any hurt the character has caused.

“It was certainly not my intention. I wanted to spread laughter and joy with this character and the idea that its brought pain and suffering in anyway, that it was used to marginalize people, is upsetting genuinely,” Azaria said during an interview with Stephen Colbert in 2018.