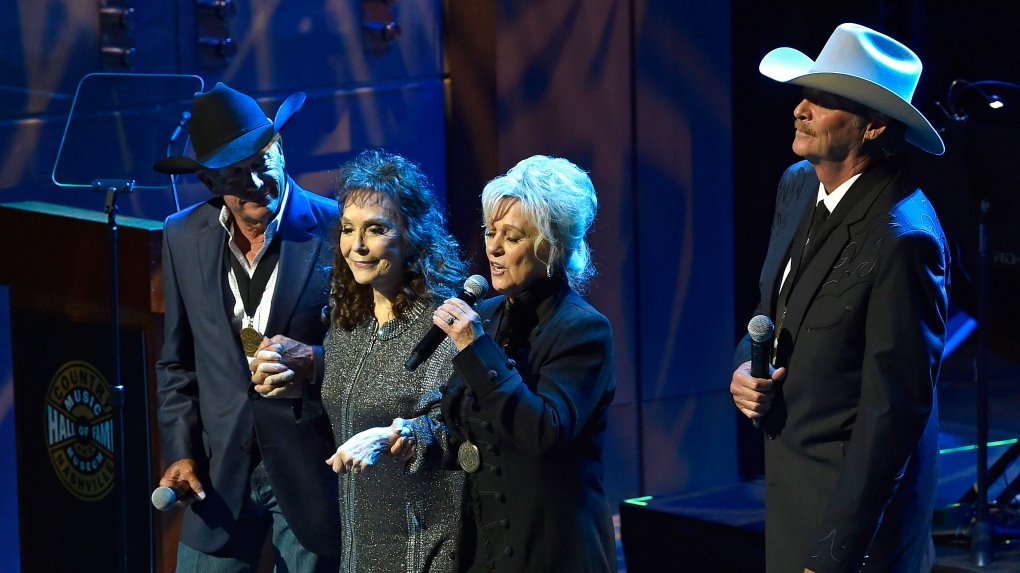 George Strait, left, Loretta Lynn, second from left, and Connie Smith join Alan Jackson, right, in singing 'Will the Circle Be Unbroken' during Jackson's induction into the Country Music Hall of Fame on Sunday, Oct. 22, 2017, in Nashville, Tenn. (Andrew Nelles/The Tennessean via AP)

Country icon Loretta Lynn returned to the Hall of Fame for the first time since she suffered a stroke in May to formally induct Jackson. Lynn, who cancelled her tour dates this year to recover, said Jackson was the only person that could make her leave her house.

She recalled meeting Jackson when he was a nervous young artist decades ago and knowing then that he would "be one of the greatest singers in country music."

"He hadn't let me down," said Lynn, who is also a member of the Hall of Fame.

The 59-year-old Jackson is still one of country music's most successful solo artists, having sold nearly 45 million albums in the United States and had 26 singles reach the top of the Billboard country charts.

With his baritone voice and knack for telling stories about small town Southern life, the Newnan, Georgia-born singer was among a wave of neo-traditionalists that broke through in the 1990s.

He joked that when he was signed to Arista Nashville, a label started by Clive Davis, they had no idea how popular he would become.

"I was just a token country singer they signed for that label and bam, I took off," Jackson said.

Many of his hits became instant classics, from the barroom staple "Chattahoochee" to the sombre "Where Were You (When the World Stopped Turning)" written after the Sept. 11 attacks.

But he's also been characterized as shy and uneasy in the media spotlight.

"I am not really shy, just socially awkward," Jackson said. "I just don't like to talk too much."

Instead, he let his songs speak for him, often writing about his father, his wife and the everyday joys and sorrows of the average man. Other hits include "It's Five O'Clock Somewhere," "A Lot About Livin' (And a Little 'Bout Love)" and "When Somebody Loves You."

George Strait, Alison Krauss and Lee Ann Womack each performed one of Jackson's songs in his honour.

Reed, who died at age 71 in 2008, was first known as an in-demand studio musician with a unique finger picking style on the guitar. He played for and wrote songs for stars like Elvis Presley and Porter Wagoner.

Reed, originally from Atlanta, became more popular when his songs began charting. His hit song "When You're Hot, You're Hot" earned him a Grammy award.

In later years, he started appearing in TV and movies, most notably playing Burt Reynolds' sidekick in "Smokey and the Bandit." He also sang many of the songs on the soundtrack, including "East Bound and Down."

His daughters, Seidina Hubbard and Lottie Zavala, accepted the honour on his behalf.

Hubbard said one of her fondest memories of growing up was listening "to the beautiful sound of that guitar in the house all the time."

Performing some of his songs were guitarists Tommy Emmanuel, John Knowles and Steve Wariner, while Jamey Johnson performed one of his personal favourites, "East Bound and Down."

Schlitz, 65, from Durham, North Carolina, had his first songwriting hit in 1978 when Kenny Rogers recorded his song, "The Gambler," which became Rogers' signature song throughout his career.

Other songs he helped write include "On the Other Hand" and "Forever and Ever, Amen," both sung by Randy Travis; "When You Say Nothing at All," recorded by both Keith Whitley and Alison Krauss; and "Strong Enough to Bend," by Tanya Tucker.

He was elected to the Songwriters Hall of Fame in 2012 and helped to create the popular songwriters in the round format at Nashville's famed Bluebird Cafe.

Aloe Blacc and Vince Gill sang a duet version of "The Gambler," while singers Charlie Worsham and Mary Chapin Carpenter also performed his songs in his honour.

Schlitz gave some advice to his grandchildren seated in the audience from what he had learned in his career.

"No one does this alone. In your life, be a part of something bigger than yourself," Schlitz said.