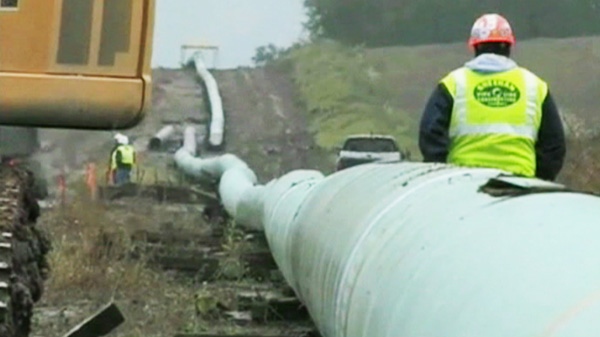 The anticipated $5.5 billion Enbridge Inc. project would result in a 1,177-kilometre twin pipeline carrying crude oil from Alberta to an oil tanker port in Kitimat, B.C., for eventual export to Asia.

The Canadian Centre for Policy Alternatives argues in "Enbridge Pipe Dreams and Nightmares," that the Alberta-to-B.C. pipeline will create 1,850 construction jobs per year for three years and a "handful of permanent new jobs" when complete.

The report, released today, is the latest claim in the a contentious debate over the impact that the 1,177-kilometre dual-pipeline will have on the country's jobs market.

Enbridge has long maintained that the pipeline will create 62,700 person years of construction employment across Canada over three years and 1,150 long-term jobs.

For author and economist Marc Lee, the report represents a shift in tactics for pipeline opponents who have until recently focused mainly on the environmental -- not economic -- impacts.

"The point is just to take a bit of a reality check on some of the numbers that have been thrown around by Enbridge itself, as well as the federal government in support of the pipeline and to do what is more of a traditional cost-benefit analysis," said Lee.

"Basically we find that the numbers in support of the pipeline economically are vastly overstated, particularly in terms of jobs."

While the company has yet to see the report, Enbridge spokesman Todd Nogier is standing firmly behind his company's employment estimates.

"We're very confident in our numbers," he said. "We had our economic-benefits package prepared for us by an economist at the University of Calgary."

In fact, Nogier said Enbridge's employment projections are open to public scrutiny during public hearings which began in January and are taking place today in Skidegate, B.C., located on Haida Gwaii.

Lee said he began working on the report in January after Natural Resources Minister Joe Oliver wrote a letter, stating foreign-funded environmentalists and jet-setting celebrities were trying to advance a "radical ideological agenda" during the hearings.

"Their goal is to stop any major project -- no matter what the cost to Canadian families in lost jobs and economic growth. No forestry. No mining. No oil. No gas. No more hydro-electric dams," wrote Oliver.

After those comments, Lee said he studied Enbridge's submissions, specifically the model, known as an input-output model, that was used to develop the company's jobs' estimates.

Input-output models are problematic, said Lee, because they don't take into account changes in technology, prices, the composition of materials, energy or even labour.

Under the model, Lee argues total job-creation numbers can also be padded because employment numbers are tied to total expenditures.

He said Enbridge's $5.5-billion investment includes a $500-million contingency reserve, a figure that by itself increases jobs estimates by 10 per cent.

Another problem with the model, said Lee, is that it assumes workers would be unemployed were it not for the project.

If the pipeline did not proceed, the vast majority of workers would be employed elsewhere, he added.

Lee also attacks the company's estimates spinoff jobs related to the project, and represent 43 per cent of the purported person years of employment.

He said the so-called induced job numbers are hard to measure accurately and require assumptions about consumer spending.

In the report, Lee also criticizes the project because there is the "minimal processing of oil sands bitumen," leaving little room for secondary job creation. Bitumen is a thick, tar-like substance that needs processing to extract the oil.

He said that while the company and oil-sands producers will accrue large profits, only a very small share of the income will go to workers.

Lee also says that Enbridge has ignored the economic costs and environmental impacts of the project, adding that a $5-billion investment into green jobs and industries would create between three and 36 times the number of jobs.

"Basically, the idea of just building a pipeline to send more fossil fuels to China, I think, is the wrong thing to do," he said.

In response, Nogier said a project as large as the pipeline is bound to draw attention.

Minister Oliver is expected to address the Vancouver Board of Trade today about jobs, growth and prosperity through responsible resource development.