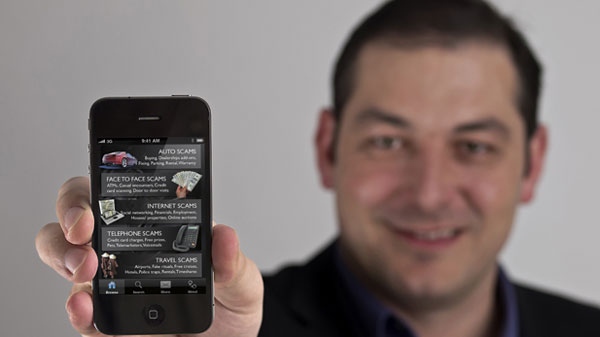 Sorin Mihailovici is the creator of the Scam Detector application for iPhones. The app climbed to No. 1 in Canada on Sunday, Sept. 18, 2011.

A street-smart manual aimed at preventing financial fraud has become the top lifestyle app for iPhones in Canada on Sunday.

The Scam Detector app, created by Sorin Mihailovici, is loaded with 500 searchable scams in five categories.

A user of the app can type in an offer they're unsure about and learn if that "work from home" job posting is real or fraudulent.

Mihailovici said the idea behind his application is to make people aware of the dangers of financial fraud in all aspects of their life.

"Especially nowadays, with advances in technology, it's so easy to pretend to be someone else, or to be doing something else," he told CTVNews.ca in a telephone interview on Sunday.

"The rate of fraud is way higher than it was before."

In the last two days, the app has become the No. 1 most-downloaded smartphone application in Canada and sponsors have shown interest in partnering up with Mihailovici.

"There's nothing like it out there," he said. "Scam detection is a big thing. People lose money."

The Edmonton-based journalist spent 10 months researching the scams and then breaking them down into searchable categories.

The types of categories include:

Mihailovici said he sees the most interest in Internet and travel scams.

He said his interest in the seedy world of scams started when a friend lost his life savings to a Nigerian scam in 2007. Soon after, he made a 30-minute online film called "419: The Nigerian Scam."

"I wanted to do something about it," he said, adding that after all of his research into frauds and cons "his eyes are open" to the scams out there.

The Scam Detector app has been downloaded in 62 countries and is 99 cents on iTunes. It's also available for the iPod touch and the iPad.

A free version of the app offers information on 90 scams.