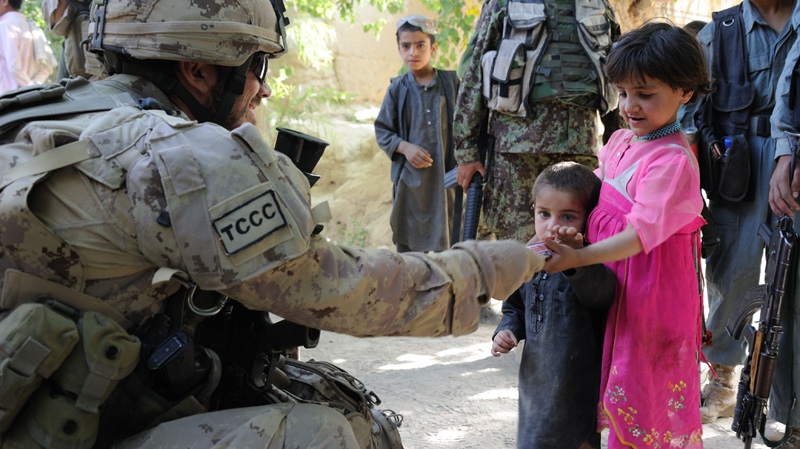 Canada's combat role in Afghanistan is on track to end in July, and troops are beginning to wind down their military operations and prepare for the journey home.

But for a group of specialized military "movers" tasked with staying behind to prepare, pack up, and 'rack and stack' the gear for shipping, months of work is just beginning.

The Mission Closure Unit's mammoth responsibility, which has been compared to packing up and moving a small town from Afghanistan to Canada, is in the early stages now but will hit full steam in July.

The goal is to complete the move by the end of the year.

But even then, due to the complexities of repatriating such vast quantities of equipment, it is expected that the Canadian Forces won't be ready for another deployment of combat forces until November 2012, a full year later.

Lt.-Col. Dave Ross, assistant chief of staff for the Mission Transition Task Force, which includes the 350-member MCU, said the work ranges from dismantling buildings and infrastructure, to scrubbing vehicles to ensure every last speck of dust, seed or insect, is removed.

Prioritizing the shipping schedule, tracking the gear, fumigating sea containers and even scheduling flights around heat forecasts, are all factors that must be considered.

"There are a lot of moving pieces," Ross, reached at his office at Kandahar Air Field, told CTV.ca.

The military transition at combat areas in Afghanistan, by comparison, will take place essentially overnight with American troops literally swapping places with their outgoing Canadian allies under cover of darkness.

But shipping out the mountain of gear, guns, tanks, helicopters and vehicles accumulated over a decade, will take months.

Job number one, Ross said, is to prioritize the inventory and come up with a shipping schedule.

The MCU must also decide how those materials come home. High-value combat equipment such as Leopard 2 tanks, LAV-3 armoured troop carriers and big guns will most likely be loaded aboard military transport planes and flown home under high security.

The same goes for sensitive equipment such as communications gear, counter-IED technology and anything that needs to be ready for future operations.

And Ross needs to be able to track every piece of gear as it makes its way back to Canada.

"And at any one time someone might say ‘where are the Leopard tanks?' And we have to be able to say ‘some are in transit on a ship, some are in an aircraft, some are in a truck heading across whatever country,'" Ross said.

"So it's all that tracking while you're prioritizing and moving this stuff that's really the challenge, and you're doing it with this heat which messes up our timing."

Ross said a certain number of LAV3s will be considered a high-priority shipping item, since the versatile armoured vehicles need to be ready for deployment on their next mission, at a moment's notice.

Tanks, while extremely valuable, will not be needed in the short term, and will likely be sent home on a slower shipping schedule.

Other equipment -- such as older jeeps or civilian transfer vehicles -- will likely be flown to a staging point "somewhere in the Mediterranean," where they will then be loaded aboard ships for the slower but less-expensive trip home, he said.

Other items, including everything from fibre-optic cable to office supplies, will be sent by truck from landlocked Afghanistan to sea-side staging areas.

No junk left behind

In total, the Canadian Forces expects to send home approximately 1,000 vehicles and pieces of equipment, and 1,600 sea containers packed with everything from weapons and ammunition to fatigues, spare parts and tools.

Anything that can't be given away or sold will be broken down and sent home for recycling -- including any Canadian-owned buildings that NATO doesn't want, Ross said.

"It's been a conscious decision that we won't leave a junk yard over here, it's as simple as that," Ross said.

"We think our soldiers have done an absolutely great job over here the last few years and to leave a junkyard would be absolutely embarrassing."

But before anything can be loaded aboard a plane, truck or boat, it needs to go through an intense preparation process.

Anything that is broken down or simply in need of a tune-up will be sent to the shop so it can be shipped home in good working order, ready to roll off the ramp on Canadian soil and go to work, if necessary.

A meticulous cleaning process is also on the agenda, Ross said.

Armour will be removed from vehicles along with floorboards and any parts that may have trapped dust, dirt or mud. Then members of the MCU will literally scrub, vacuum and chemically disinfect the vehicles, removing any dust, insects, seeds or animals that aren't welcome in Canada.

A less-intense version of the scrub-down is repeated at the transition points to remove any new dust or dirt, and a final check is done at the Canadian arrival points by military personnel, along with the Canada Border Services Agency and Canadian Food Inspection Agency.

The same sort of care is taken with everything from artillery equipment to shovels and machinery. Shipping containers undergo a similar regime, with every "sea can" fumigated before a single item is loaded for shipping, Ross said.

On top of the massive technical challenges of moving everyone and everything home, the MCU also has to deal with significant environmental hurdles -- such as Afghanistan's scorching heat.

Because temperatures can reach upwards of 40 C in June, July and August -- when the team is carrying out the majority of its heavy lifting -- work happens at a slower pace.

Soldiers simply can't be working inside shipping containers in the heat of the afternoon, and often split their shift between the morning and the evening, or work overnight to avoid the heat.

There are also air lift issues related to the weather. Ross said he tracks temperature forecasts on a daily basis and often plans the air freight schedule around heat predictions.

"As it gets warmer the amount of lift an aircraft can handle is quite reduced. When it gets really hot and a big aircraft comes in, it can't handle as much," Ross said.

"So to make it complicated we plan around the air flow as well because if we've got heavy stuff the plane just can't take off."

He said transport planes will fly at night, or schedule heavy lifts for the cooler months, in order to work around the near-crippling heat.

Lewis MacKenzie, a former major general with the Canadian Forces, said he expects the transition to go smoothly. Many of the soldiers, he said, are on their second or third tour of Afghanistan and are well acquainted with exit procedures.

The efforts of the MCU and the soldiers who have been in Afghanistan in recent years will pay off in the form of a graceful withdrawal, he predicted.

"The last thing you want is to leave an area and then the people you have handed over to, in this case the Americans, after you leave say ‘oh my god what a shambles that was,'" MacKenzie told CTV.ca.

"I'm totally convinced that won't be the case. Certainly all the public pronouncements from the Americans are that the handover is going extremely well."

While the process is expected to be slow and somewhat tedious, Ross said there's also an underlying sense of urgency. The team's goal is to have the last shipping container, the last truck or tank, home by Dec. 31, but he and the MCU team are pushing to finish up early in order to make it home by Christmas.

He said the MCU's efforts are a major component in helping the Canadian Forces ensure a strong finish in Afghanistan, marking the end to a mission that has claimed 156 Canadian lives.

"It's the pride in knowing we could get it done and we've preserved Canada's legacy here. They were here, they did a great job and they haven't left any junk behind," he said.